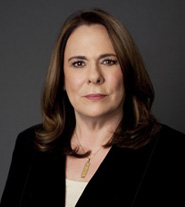 LAWRENCE – Candy Crowley, CNN’s chief political correspondent, will receive the 2012 William Allen White Foundation National Citation Feb. 10. The award ceremony and public lecture, which are free to the public, will be at 1:30 p.m. in Woodruff Auditorium at the Kansas Union.

Crowley joined CNN in 1987 as a congressional correspondent from NBC News. She began her broadcast journalism career as a newsroom assistant for Metromedia radio station WASH in Washington, D.C., after graduating from Randolph-Macon Women’s College. Crowley later served as an anchor for Mutual Broadcasting and as a general assignment and White House correspondent for the Associated Press during the Reagan presidency before moving to NBC News. She became the anchor of CNN’s “State of the Union With Candy Crowley” in February 2010.

“Candy Crowley is an expert on politics, politicians and the events that have changed the world over the last two decades,” said Ann M. Brill, dean of the School of Journalism and Mass Communications. “We are happy to present her with this citation and have her join the distinguished list of journalists who have received it. We also are looking forward to her sharing her thoughts on the state of journalism today.”

Crowley’s career has taken her around the nation and the world. In addition to covering the aftermath of Hurricane Katrina in the Gulf Coast, Crowley reported from the beaches of Normandy on ceremonies marking D-Day’s 40th anniversary as well as Ronald Reagan’s trips to China, Bitburg and Bergen-Belsen. She also covered the 1983 terrorist bombing of U.S. Marine barracks in Beirut and the U.S. bombing of Libya.

“Candy has earned a reputation all around Washington as the consummate pro in television journalism: Tough but fair, smart, knowledgeable and with a great sense of news,” said Jerry Seib, a William Allen White Foundation Trustee. “She’s well-respected for all the right reasons.”

The Associate Press honored Crowley with its Broadcasters’ Award for spot news reporting for her coverage of the Reagan campaign, as well as an award for her in-depth reporting on the 1980 Reagan campaign. She received the 2003 and 1998 Dirksen Awards for distinguished reporting on Congress from the National Press Foundation. She also won the 1997 Joan Shorenstein Barone Award for her coverage of Bob Dole’s campaign for presidency. In 2003, Crowley received an Emmy for her work on CNN Presents Enemy Within, and in 2004 she won the Gracie Allen Award in the “National New Story-Series” category for “War Stories” and a National Headliner and a Cine award for CNN Presents Fit to Kill. In 2005, Crowley was honored with the Edward R. Murrow Award and another Joan Shorenstein Barone Award for her excellence in journalism for her coverage on the 2004 presidential election.

The William Allen White Foundation trustees chose Crowley to receive the citation, presented annually since 1950. KU’s William Allen White School of Journalism and Mass Communications is named in White’s honor. White (1868-1944) was a nationally influential Kansas editor and publisher. He won the Pulitzer Prize in 1923 and posthumously in 1947.

“The start of classes and the return of students to campus are a great time for us to reaffirm how essential these… https://t.co/4PkdXPRWxA
«»
Follow us on Twitter »
Why KU
Apply »
One of 34 U.S. public institutions in the prestigious Association of American Universities
44 nationally ranked graduate programs.
—U.S. News & World Report
Top 50 nationwide for size of library collection.
—ALA
5th nationwide for service to veterans —"Best for Vets: Colleges," Military Times