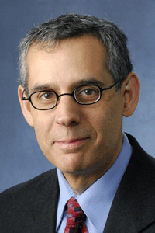 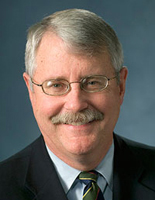 LAWRENCE – Two professors at the University of Kansas have been chosen as fellows by the world's largest scientific society, the American Chemical Society.

The selection as 2012 American Chemical Society Fellows honors Joseph Heppert, professor of chemistry, and Jeff Aube, University Distinguished Professor of Medicinal Chemistry, for their contributions to science and the profession of chemistry. The 2012 class consists of 96 members nationwide. Only eight other institutions in the U.S. had two or more fellows on this year's list: Princeton University, Purdue University, University of Illinois, University of North Carolina, University of Utah, University of Wisconsin, the Environmental Protection Agency and Pacific Northwest National Laboratory.

The selection of fellows is based on achievements including outstanding and creative scientific research, superior achievements in the teaching and learning of chemistry, managerial excellence, and volunteer service through meetings and communication with the public. The new fellows will be honored at the society's fall national meeting in Philadelphia this August.

Heppert is the fourth member of the Department of Chemistry in the College of Liberal Arts & Sciences to be named an ACS fellow. He joins the company of colleagues Kristin Bowman-James and Daryle Busch, both distinguished professors, and Ted Kuwana, a distinguished professor emeritus. In addition to his faculty appointment in chemistry, Heppert is also associate vice chancellor for Research and Graduate Studies.

Heppert's research specializations include organometallic chemistry and science education. Since joining the KU faculty in 1985, he has amassed a lengthy list of achievements in teaching, research and service. He has led the chemistry department as chair, directed KU's Center for Science Education, which is home to UKanTeach; served as a member of the American Chemical Society Presidential Task Force on the Future of Science Education; and led numerous externally funded projects to enhance K-12 and university-level science education.

His academic background includes a bachelor's in chemistry from San Jose State University and a doctorate in inorganic chemistry from the University of Wisconsin-Madison.
Aubé is the third faculty member of the School of Pharmacy's Department of Medicinal Chemistry to earn the title of ACS fellow, joining Professor Gary Grunewald and University Distinguished Professor Lester Mitscher. In addition to his distinguished professorship, Aubé directs two large NIH-funded initiatives in the general field of chemical biology and drug discovery, both of which enable KU researchers to participate in national networks devoted to biomedical research.

His research interests are in synthetic organic chemistry and medicinal chemistry. He has previously been honored as a fellow of the American Association for the Advancement of Science and an Eli Lilly grantee. He has earned the Sato Award of the Japanese Pharmaceutical Association and was selected earlier this year as a Cope Scholar by the American Chemical Society. At KU, Aubé has received an Olin Petefish Higuchi Achievement Award, a Kemper Teaching Fellowship for Teaching Excellence and the H.O.P.E. (Honor for an Outstanding Progressive Educator) Award.

He earned a B.S. from the University of Miami and a doctorate in organic chemistry at Duke University. He also served as an National Institutes of Health postdoctoral fellow at Yale University.

With more than 164,000 members, the American Chemical Society is the world's largest scientific society and one of the world's leading sources of authoritative scientific information. A nonprofit organization, chartered by Congress, ACS is at the forefront of the evolving worldwide chemical enterprise and the premier professional home for chemists, chemical engineers and related professions around the globe.