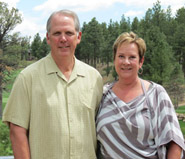 LAWRENCE — A new scholarship at the University of Kansas will benefit students in the William Allen White School of Journalism and Mass Communications. KU alumni Kathy and Tom Plimpton, of Fort Worth, Texas, have made a $60,000 gift to KU Endowment to create the Kathleen Donnelly Plimpton Scholarship. The scholarship will focus on women undergraduate journalism majors from Kansas.

Reflecting on her four years at KU, Kathy said, "There were a few hours at The Hawk and the Wheel and many more at my beloved Allen Fieldhouse. But, most of all, the best weeks, months and years were spent at Flint Hall with friends and faculty and resulted in an education I value to this day. Graduating from the J-School was an important milestone in my life." (Flint Hall was renamed Stauffer-Flint Hall in 1983.)

Before Tom's retirement in 2011, the family frequently relocated for his career.

"Tom and I have made many moves over the last 37 years, and they were all far from our Lawrence," said Kathy. "We lived abroad for several years and spent times in other stateside locations and still always felt close ties to our alma mater."

Dean Ann Brill expressed her appreciation for the new scholarship. "The gift from Kathy and Tom Plimpton is a wonderful gift from KU alumni," she said. "When alumni reach out to give a helping hand to our current students, everyone benefits. This scholarship will make a difference in the lives of many students."

Kathy noted that one of three daughters is a KU alumna. Jessica Plimpton Foy earned a master's of social work (MSW) from KU in 2000.

The Plimptons look forward to continuing KU connections. "I hope this scholarship award might, in some way, entice our Texas-born grandchildren and future generations to come to KU," said Kathy. "It would be wonderful to experience KU as grandparents!"

Earlier this year, the Plimptons celebrated another KU milestone — the naming of the Tom Plimpton Innovation Studio in KU's Center for Design Research, and the establishment of an innovation fund in Tom's name to support the center's interdisciplinary research projects.

Both gifts are part of Far Above: The Campaign for Kansas, the university's comprehensive fundraising campaign.

A @KUHistoryDept professor documented his quest to consume as much funazushi as possible. 🍣🥢 #KUdiscoveries https://t.co/qbez25f8Pa
«»
Follow us on Twitter »
Why KU
Apply »
One of 34 U.S. public institutions in the prestigious Association of American Universities
44 nationally ranked graduate programs.
—U.S. News & World Report
Top 50 nationwide for size of library collection.
—ALA
5th nationwide for service to veterans —"Best for Vets: Colleges," Military Times