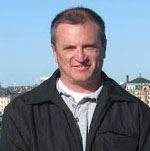 Butcher also will direct the new Media Crossroads venture in the Kansas Union at the University of Kansas. He has an extensive background in multimedia and television production, including working with CBS Sports for production of the Kansas City Chiefs and KU Jayhawks televised games. His own background as a college track and field all-star athlete at the University of Southern Colorado has led to his enthusiasm for and expertise in sports production. Butcher also holds a master's of science degree from KU.

His work as a video production specialist in the Olathe School District earned the district being designated as an Apple Exemplary Program. Butcher is a respected public address announcer and is a voice of the Kansas Relays. He spent Summer 2012 traveling in Europe and studying the effects of social media on the Tour de France and the London Olympics.

"Cal brings an expertise, enthusiasm and vision that will propel Media Crossroads to its potential," said Scott Reinardy, associate professor of journalism. "His experience working with students in multimedia environments is ideal as the Haynes Professor and Media Crossroads director."

Media Crossroads is an interactive center where visitors create their own media, watch media in the making and foster an environment of shared ideas. Journalism students and staff will assist visitors in telling their own stories. Butcher also will teach journalism courses.

"With the hiring of Cal Butcher, we now have all the pieces in place to make Media Crossroads live up to its potential," said Ann M. Brill, dean of the William Allen White School of Journalism and Mass Communications. "It has been exciting to work with Dave Mucci and the staff of the Kansas Union to launch this innovative center."