LAWRENCE — Forging new connections for the University of Kansas in the Caribbean, two Kansas Biological Survey scientists spent a week in Haiti this past May gathering data on one of the country’s lakes, as well as several streams, and teaching water quality workshops. 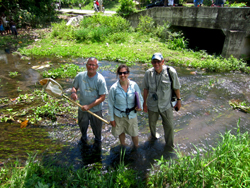 With support from KU, Debbie Baker and Don Huggins traveled to the coastal town of Les Cayes. At lake Etang Lachaux, about 10 miles north of Les Cayes, they spent a day walking the perimeter of the lake collecting water quality and habitat data. They also trained both a government group and university students in watershed assessment.

Study of Haitian lakes and streams is lacking. The only prior study of lake Etang Lachaux was performed in 1934, when some native vegetation still remained around the lake. Today, the surrounding land is nearly barren of trees, with corn and other crops grown on rocky hillsides and a new highway along the west side of the lake.

“The lake was unusually low when we were there, and fish were dying,” Baker said. “The Ministry of the Environment had earlier stocked the lake with carp and tilapia in hopes of maintaining sustainable fish population. The employees of this agency joined us at the lake, and after training them in the techniques we were using, we were able to advise them that this may not be the best-suited lake in the area for the fisheries project.”

The data gathered enabled Baker and Huggins to study the water’s chemical properties and evaluate its health, and to map the lake level in order to set a baseline for future comparison studies. This type of data collection is typical of these scientists’ research through the Central Plains Center for BioAssessment, a core program of the Kansas Biological Survey. The nonregulatory program works primarily with state, tribal, federal and academic scientists, and other public entities in U.S. EPA Region 7 to collaborate on and research issues of aquatic ecology and water quality. Huggins, a senior scientist at the Survey, directs the center, which he founded in 1998. He joined Baker, assistant director, who has done previous work in Haiti.

Baker said that a group of children followed the scientists around part of the lake and that one 14-year-old boy stayed with them the entire day.

“We were able to teach the children some appreciation for their natural resources,” she said.

Baker and Huggins conducted the study at the invitation of Jean Dunes Gustave, minister of the environment for the South Department, as the office does not have the means for such research. The lake also is close to the town of Camp Perrin, which draws some tourism with a waterfall and relatively lusher vegetation and cooler temperatures, and is being considered as an ecotourism site. The lake’s proximity to the American University of the Caribbean contributes to its potential as a site for student groups to visit.

Also during their week in Haiti, Baker and Huggins taught two separate water quality workshops for employees of the Ministry of the Environment and students of the American University of the Caribbean in Les Caves. They found that the government employees had little formal education.

“Teaching science to this group was a challenge, so we immediately switched our focus,” Baker said. “We talked with the group about the various human activities in the Camp Perrin watershed that affect the water quality of lakes and streams, and how to mitigate these.”

The workshop for the university students was much different. They spoke English and had taken organic chemistry, so there was no need for a translator, and the scientists were able to teach at the level of detail they would at a U.S. university.

Baker said the trip made her and Huggins aware of the lack of science education among the Haitian population that was not university-trained.

“While the government employees are very enthusiastic about improving their environment, without scientific knowledge they are at a standstill,” she said. “The answer might be further training for university students — and encouragement to stay in their country and become government leaders.”

Baker said she hopes the connections built in Haiti could benefit others at KU who work there.

Baker and Huggins received KU professional development and international travel funding for the study. The Kansas Biological Survey provided additional support and supplies, and the American University of the Caribbean provided lodging.

The Kansas Biological Survey, established at KU in 1911, is one of the university’s scientific research centers. It houses a variety of environmental research and remote sensing/GIS programs and manages the 3,400-acre KU Field Station, a site for study in the sciences, arts and humanities.

Search options »
Subscribe to KU Today
A scholar in @KUCollege examines Thomas Jefferson's encounter with an Osage delegation through a modern lens. “It d… https://t.co/FYhhhxhdg1
«»
Follow us on Twitter »
Why KU
Apply »
One of 34 U.S. public institutions in the prestigious Association of American Universities
44 nationally ranked graduate programs.
—U.S. News & World Report
Top 50 nationwide for size of library collection.
—ALA
5th nationwide for service to veterans —"Best for Vets: Colleges," Military Times