LAWRENCE — A $10 million estate gift from Stata Norton Ringle and David Ringle will create scholarships for students in the University of Kansas Medical Center’s School of Health Professions and provide support for libraries at the medical center and on KU’s Lawrence campus. 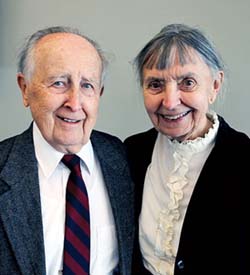 The gift will be divided equally for these three purposes: student scholarships, the Clendening History of Medicine Library and the Kenneth Spencer Research Library. This more than doubles the amount of scholarship support available for students in the School of Health Professions. The library gifts will support acquisition of books and manuscripts, and maintenance of existing collections.

“Stata Norton Ringle was a pioneer in her field and a role model for generations of students at the medical center,” said Chancellor Bernadette Gray-Little. “She and David were devoted to each other and to their scientific endeavors. Through this generous gift, they have left an enduring legacy that will benefit KU students and help the university educate the health professionals Kansas communities need.”

Stata Norton Ringle served in various capacities at the medical center from 1962 until 1990. She was emerita professor of pharmacology, toxicology and therapeutics; professor in the Department of Dietetics and Nutrition; and dean of the School of Allied Health (now the School of Health Professions). She wrote more than 150 research articles and was internationally recognized for her work on the effects of drugs and toxins on animal behavior.

David Ringle was a research physiologist at the Midwest Research Institute until his retirement. He was awarded the prestigious New York University Founders Day Award. Former residents of Leawood, the Ringles were married for more than 62 years and died within three months of each other in 2012.

Stata co-wrote a book titled "Herbal Supplements and the Brain: Understanding Their Health Benefits and Hazards," which was published shortly before her death. Her co-author was S.J. Enna, KUMC associate dean for research and graduate education.

Enna also is a professor of pharmacology and physiology and former chair of the Department of Pharmacology. He and the Ringles were friends for more than 20 years. Enna described them as a delightful couple who enjoyed spending weekends with their dogs at a modest second home they owned in the country. The couple had no children, and Stata was devoted to her career.

Enna described Stata as energetic. “Up to the end, she was very interested in life and staying active, especially intellectually active. She was always curious, always reading something.”

When Stata was in her early 80s, she decided to translate a 400-page manuscript at the Kenneth Spencer Research Library. "The Jesuatti Book of Remedies" is a compilation of medical treatments used by the friars of the Order of Saint Jerome to cure sick people around the 16th century. She first taught herself Renaissance Italian, then spent four years translating more than 2,000 entries.

“This really epitomizes Stata,” said Enna. “She didn’t speak or read Italian. But she didn’t let anything like that stop her.”

In addition to their monetary estate gift, the Ringles donated their collection of medical and scientific books to the Clendening History of Medicine Library. Other books, including works of historical and literary interest, went to the Kenneth Spencer Research Library. During their lifetimes, the couple gave nearly $250,000 to KU Endowment for KU, with the bulk of their support equally divided among the School of Health Professions and the two libraries.

Stata was named an honorary alumna of the School of Health Professions in 1998. For the past 28 years, the school has honored her by presenting the annual Stata Norton Distinguished Teaching Award to deserving professors.

The gift counts toward Far Above: The Campaign for Kansas, the university’s $1.2 billion comprehensive fundraising campaign. Far Above seeks support to educate future leaders, advance medicine, accelerate discovery and drive economic growth to seize the opportunities of the future.

Part of a larger project to look at technology in the Global South, new research by @KUJournalism prof Hong Tien Vu… https://t.co/Pcc0mDuOXw
«»
Follow us on Twitter »
Why KU
Apply »
One of 34 U.S. public institutions in the prestigious Association of American Universities
44 nationally ranked graduate programs.
—U.S. News & World Report
Top 50 nationwide for size of library collection.
—ALA
5th nationwide for service to veterans —"Best for Vets: Colleges," Military Times