LAWRENCE — A graduate student at the University of Kansas is the lead author on a recently published description of a new bird species, the Junin Tapaculo, found in the remote Andes Mountains of central Peru. 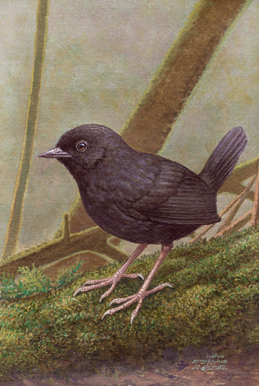 Following sightings by birders and leads fellow ornithologists, Peter Hosner, a doctoral student of ecology and evolutionary biology at KU, focused his fieldwork in Junin, a department in central Peru scarcely surveyed by ornithologists.

“We found the Junin Tapaculo in the field by its distinctive voice,” Hosner said. “I’d spent a lot of time traveling and working with birds in the Andes before I enrolled at KU, and I had never heard anything like it before. We made voice recordings and collected specimens that are needed in all scientific species descriptions. Tapaculos are extremely difficult to identify, so at this point we weren’t sure if it was a new species, or if we just happened to record a rarely given vocalization by an already described species.”

Because discoveries of new birds are rare, Hosner thought the vocalization might be a new sound from a bird already known to science. However, upon returning to Kansas, his quest for more information on the bird yielded nothing. Museum searches, consultations with experts and searches for archival sound recordings all pointed to the idea that Hosner may have uncovered a new species.

“In one archive, I found that birders had recorded the same unusual vocalizations, but on a different road about five kilometers away from our study site,” he said. “They had tentatively identified the recordings as a different species of tapaculo — a species which occurs in the same area. I also sequenced DNA and compared the sequences to known species. None matched. The appearance of the specimens, their unusual song and unique DNA convinced us it was new species — and I started writing up the description.”

Hosner’s paper on the new tapaculo appeared in the Wilson Journal of Ornithology last month.  His co-authors are Town Peterson, professor of ecology and evolutionary biology and curator at the Biodiversity Institute at KU, Mark Robbins of KU’s Biodiversity Institute, and Thomas Valqui of the Louisiana State University Museum of Natural Science and the Centro de Ornitologia y Biodiversidad in Lima, Peru.

Hosner said the Junin Tapaculo is small and uniform blackish in color. It is notable for its habit of sticking its tail straight up in the air. In appearance and behavior, the birds are similar to wrens, even though they are not closely related. They have been described as mouselike and photophobic.

“Tapaculos are recognized by ornithologists and birders as one of the most difficult bird families to observe in the field,” said Hosner. “They tend to be found near the ground in areas of thick, tangled vegetation. They’re active and almost never stop moving. Even if you can’t see the birds themselves, you can usually locate them by the movement of vegetation in their wake. They’re most easily seen by playing recordings of their songs to coax them out into the open. Because of this behavior, frustrated observers have suggested that tapaculos behave more like mice than they do birds.”

The scientists report the bird’s range is limited to a specific band of elevation within the Andes Mountains — between about 8,000 and 10,500 feet.

“The eastern slope of the Andes is steep and densely forested,” said Hosner. “With increasing elevation, it gradually becomes colder and wetter, and the trees become shorter. These forests are commonly called ‘cloud forests’ because it’s frequently foggy. They are constantly damp, and moss and epiphytes, like orchids and bromeliads, cover everything. They are some of the most beautiful forests in the world. Along with the vegetation, bird communities in the Andes change with elevation. Moving a few thousand feet up or down results in an almost completely different list of bird species. In Junin, we found six different species of tapaculos at different elevations, ranging from tall forest down low to grasslands above tree line.”

However, asked what was the most difficult part of describing a new species — the first of his career — the young KU scientist didn’t cite the bird’s remote habitat or hard-to-find lifestyle.