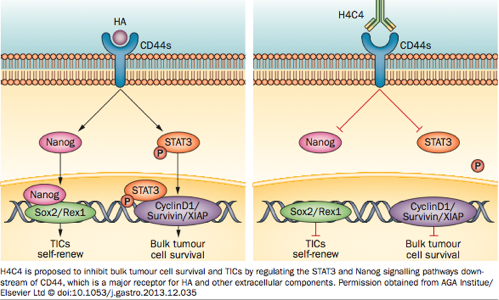 LAWRENCE — Pancreatic cancer rates in the U.S. have been rising over the past decade, and the disease takes a very heavy toll. The American Cancer Society estimates that in the last year alone about 45,220 people were diagnosed with pancreatic cancer, while 38,460 died of the illness.

Numbers like this can be discouraging. However, a researcher at the University of Kansas is striving to develop new hope for pancreatic cancer patients.

“Pancreatic cancer is one of the most deadly diseases, which led to the recent death of Steve Jobs of Apple, among others,” said Xu. “Our findings provide a direct proof for a new therapy and provide hope for the people with this disease. This therapy may also be used for other types of cancer. Finding a cure or a better therapy for cancer will relieve the burden on the patient’s family, on the health system and society as well. This is our ultimate goal in the war on cancer.”

The KU researcher said that new evidence suggests that cancer originates and progresses by a small population of cells known as cancer stem cells. These cancer stem cells act like the seeds of cancer and are responsible for re-growing a tumor after therapy.

“In order to block tumor recurrence after radiation therapy, we used an antibody to target and inhibit these cancer stem cells,” said Xu. “The antibody binds to a specific protein, called CD44s, which is expressed on the surface of pancreatic cancer stem cells. The CD44s protein plays an important role in stimulating the stem cells to divide and produce new cells. When the antibody binds to CD44s, the cells are no longer able to divide and grow.”

In the current study, Xu and colleagues gave radiation therapy to a mouse model of human pancreatic cancer to eradicate the bulk tumors, while only the cancer stem cells remained in the residual scars. Then they treated the mice with anti-CD44s antibodies and found that tumors did not grow back.

According to Xu, nearly 80 percent of pancreatic cancer cases are diagnosed in the late stages of the disease when “cancer is very aggressive and typically spreading throughout the body.” Because of this, he said that too often the tumors are resistant to therapy, such as radiation therapy.

“We now know that a small group of pancreatic cancer stem cells are responsible for re-growing a tumor after therapy,” he said. “These stem cells are hardy and difficult to kill. Therefore, even if the bulk of the tumor has been killed after treatment, the pancreatic cancer stem cells remain and will eventually regrow a tumor and may even migrate to a different location in the body to regrow. We need to target these cells and shut them down. That is exactly what we are attempting to do, using this antibody therapy.”

With these in vitro test methods, the KU researchers have shown that anti-CD44s antibody can reduce pancreatic cancer cell growth, metastasis and ability of the tumors to recur after radiation therapy.

Now, more study will be needed to determine potential toxicity to humans of targeting CD44s. Xu and his team currently are planning follow-up studies, hopeful that these could lead to a life-extending therapy for pancreatic cancer patients in the not-too-distant future.

Xu knows that every day counts.

“The sad truth is that patients diagnosed with pancreatic cancer have few treatment options,” he said. “The only hope for a cure is surgery, but unfortunately pancreatic cancer patients are often diagnosed too late, when surgery is no longer an option. We need better treatments for these patients. Now that we know more about how cancer originates and how tumors re-grow after treatment, we can design new therapies to prevent this. Our team is motivated in accomplishing this goal and move new therapy to the clinic to benefit the patients and their families.”