Accused of brainwashing and causing tragedy, groups such as these have colored the public's view of spiritually driven communal living or cults. This negative stereotyping has followed even peaceful groups for centuries, often branding them as reviled, religious offshoots or fringe groups based on some practice – most likely communal living — that puts them at odds with the mainstream. Group members are seen as withdrawn from everyday life, and the term “cult” itself is loaded with negativity.

However, a University of Kansas researcher who has studied religious and spiritual “intentional communities” says the world can learn a lot from these types of groups just by getting beyond stigmas in place. Usually leaders and members have key social causes at the heart of their mission. 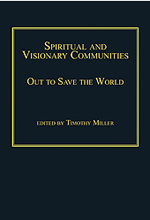 “People in these positions happen to be highly devoted to what they are doing. They are not idiots,” said Tim Miller, KU professor of religious studies. “They’re seeking to break down stereotypes that are harmful, and they’re not nearly as sinister as a lot of people make it out to be.”

He edited the anthology “Spiritual and Visionary Communities: Out to Save the World,” which is the first volume in the Ashgate Inform Series on Minority Religions and Spiritual Movements.  Scholars and even some communal residents themselves provide insight into different present-day communities around the world. The series was unveiled at the Inform Anniversary Conference, which was Jan. 31-Feb. 2 at the London School of Economics and Political Science.

Miller says there are examples of intentional communities today that reflect an idealistic vision and are focused on the improvement of society, such as environmental practices or social attitudes. For example, Tamera is a peace research village in southern Portugal with self-sufficiency, sustainability and sound environmental practices at its heart. The Camphill villages around the world seek to create communities to help integrate people with significant cognitive disabilities and allowing them to function at a high level.

“They have not just withdrawn out of pure negativity,” Miller said. “It’s more about saying we can really show the world a better way to do things. We’re going to show you a different way to live, which is a theme you find in communities over and over: ‘The norm is not good. We can show you something better.’”

Intentional communities are diverse and are typically based on religious convictions or secular commitment to a vision of a better society. However, in the public mind they are often lumped into one category, typically due to a negative news event associated with some fringe group in the past, Miller said.

Throughout history, new religious and spiritual movements have popped up all over the world, and there are examples of groups thought to be on the fringes initially — such as Quakers — that evolved over time and became established as mainstream religions. In some cases, entities within well-known religious groups also practice communal living, as in the cases of Catholic monasteries and Buddhist sanghas.

For newer groups, overcoming one basic stereotype does seem to be their main, common challenge, Miller said.

“People by and large are scared of things that are different,” he said. “Someone who is different is inherently suspicious. It’s unfortunate because there’s nothing inherently dangerous about being different.”