LAWRENCE — Kansas lies within the Great Plains, the historic grasslands of the central United States, where cropland touches prairie, where few natural lakes and wetlands persist. Into this vast landscape, known as the “Horizontal Yellow” by some ancient plains tribes, European settlers brought a lifestyle dependent on agriculture. Water has been an issue for Kansans ever since. 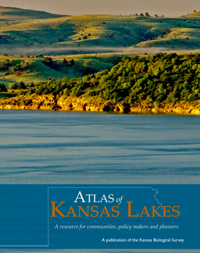 Most Kansas lakes were constructed after the Dust Bowl era to meet the demands of expanding agriculture and a growing population. Now some of the state’s oldest, yet still active, reservoirs are nearly half-filled with sediment, and the resources they provide are diminishing.

The state’s first Atlas of Kansas Lakes, just published by the Kansas Biological Survey at the University of Kansas, provides information on nearly 80 of the state’s reservoirs and a broad overview of their condition across the state.

Biological Survey scientists have studied the health of Kansas reservoirs for more than a decade, mapping the bottom of many reservoirs, which provides a means to determine sedimentation rates. They also have tested water for characteristics such as clarity and levels of nutrients, including nitrogen and phosphorus, which can lead to harmful algal blooms.

“We felt it was time to collect our studies to date into an accessible reference book,” said Ed Martinko, director of the Biological Survey. “As scientists, we feel a responsibility to provide more information to the public and resource managers about the status and trends of the state’s water resources, especially during times of drought. We also want to show where further study is needed.”

The Atlas of Kansas Lakes: A resource for communities, policy makers and planners, was developed for use by municipalities, lawmakers and project planners, as well as scientists, teachers, students and other individuals interested in water issues in Kansas.

It presents a compendium of data on the 21 federal and 55 state and local lakes studied by the Survey to date, with many photographs and clear, colorful charts. Opening sections provide a thorough overview of the types, history and status of water bodies in Kansas, as well as issues connected with aquatic nuisance species and species of conservation concern. Charts list these species, and text includes a list of online resources. Maps in these sections cover the state’s climate and physiography, its 12 major watersheds and rivers, and those lakes included in the Atlas.

The majority of the 240-page book is made up of maps and charts illustrating data on the lakes, with an opening section on how to use the Atlas. Presentation material for each lake includes:

The Kansas Biological Survey is a research unit established at KU in 1911.