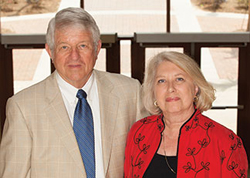 Jerry Jennett is CEO of Georgia Gulf Sulfur Corporation. He earned a bachelor’s degree in business from KU in 1963. Kay is a commercial artist who graduated from the Columbus College of Art and Design.

This is the second scholarship fund the Jennetts have established for KU. In 2010, they provided $200,000 to KU Endowment to establish a scholarship in the School of Business for undergraduates who work for or hold internships with KU Athletics.

“I am encouraged to help others, because I’ve personally seen how much it matters,” said Jennett. “I hope that students in the new program will be at least partially working their way through college.”

While attending KU, Jennett worked a number of jobs. He was night supervisor in a warehouse, delivered appliances, painted houses, serviced cars at a gas station, and assisted in the kitchen of the Chi Omega sorority house in return for room and board. In addition, his parents provided what financial assistance they could.

“Jerry and Kay Jennett embody the best ideals of Jayhawk education,” said Dean Neeli Bendapudi. “They wear their success lightly and give back generously. This scholarship fund will take the program to new heights, allowing more students to explore careers in finance, preparing them for success in their chosen professions.”

Professor Bill Beedles, director of the School of Business undergraduate programs, expressed appreciation for the gift. “For generations to come, KU finance majors who aspire to careers in the money centers of the world will enjoy greater opportunities because of the generosity of the Jennetts."

The Finance Scholars Program was started in 2005 by Professor Catherine Shenoy, under the name Jayhawks on Wall Street, to facilitate the placement of finance students in investment-related areas at top-tier financial institutions. In 2008, it was renamed as the Finance Scholars Program. Over the last eight years, the program has successfully helped students place at top financial institutions in New York, Boston, Chicago, San Francisco, Los Angeles, Dallas, London and Mumbai. The program prepares students for successful careers in finance.

The gift counts toward Far Above: The Campaign for Kansas, the university’s $1.2 billion comprehensive fundraising campaign. Far Above seeks support to educate future leaders, advance medicine, accelerate discovery and drive economic growth to seize the opportunities of the future.