LAWRENCE — A University of Kansas researcher has traced an unlikely source at the root of helping open up the vast Pacific Ocean to exploitation in the modern age: guano. 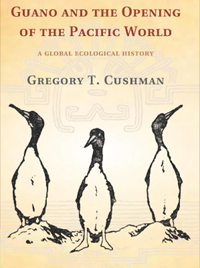 That’s right. There’s much more than it would seem to bird excrement, as its nitrogen, phosphates and other contents helped play a crucial role in many aspects of products of the Industrial Age. Gregory Cushman, associate professor of international environmental history, followed the droppings of sea birds in his book "Guano and the Opening of the Pacific World: A Global Ecological History," which has been reviewed in the journal Science and The Times Literary Supplement, where it was on the cover of the London publication in December.

“The idea that a thing such as guano could be in the mix of such a tremendously important moment in world history makes us think about the way we interact with the world,” Cushman said.

The book details how bird guano was mined for fertilizer in Latin American countries, like Peru, and a number of Pacific Islands beginning in the 1800s. It played a pivotal role in the agricultural and economic development of a number of First World countries.

“It tells us quite a lot about the historical circumstances that have enabled us to grow to become so numerous as a species,” Cushman said. “Fertilizer used to produce food and meat is fundamental to being able to support large populations of people.”

Guano’s significance extended beyond use for fertilizer because nitrates shipped along with it from the adjacent coast were critical catalysts for production of sulfuric and nitric acid that helped make production of goods like glass, bleach, dyes, color and glazes more numerous and inexpensive.

“The opening of the natural world in the Pacific exploration made a lot of the basic things we associate with modern industrialization possible,” he said.

Because of the Pacific Basin’s vastness — “so much water and so many islands” — its environmental history has eluded scholars, largely until the past 18 months, Cushman said.

“This has been sort of a black hole in part of world history, and a number of us have noticed this to an extent independently,” he said.

By following the birds and guano trade in the Pacific region, Cushman was able to delve into the environmental history of South American countries like Peru and Chile, plus East Asia and Oceania. Cushman’s environmental research also focuses on the effects of natural disasters and climatic trends, such as the El Niño and La Niña phenomena, and earthquakes similar to the large tremors that shook parts of Chile in early April. The history of guano also has a connection to human understanding of these types of disasters.

Scientists in the 1920s and 1940s studying birds in the Peruvian region watched El Niño wreak havoc with massive rainstorms and disappearance of fish stocks. They reported their findings about the disruption of the ocean-atmosphere system in the tropical Pacific at scientific meetings in Japan and Indonesia.

“The fact that we call the El Niño phenomenon ‘El Niño,’ a name indigenous to the coast of Peru, is directly related to the importance of the guano industry,” Cushman said.

A 9.0-magnitude earthquake in 1868 caused a tsunami — comparable to the 2004 Indian Ocean disaster — recorded as far away in Hawaii, New Zealand and Japan. The 1868 disaster destroyed facilities where nitrates were produced and threw a wrinkle into the global market.

“The last time a quake of this magnitude struck the Atacama Desert region was smack in the middle of the guano and nitrates boom,” Cushman said.

Another earthquake in 1877 had a similar effect on nitrate futures and played a role in sparking the War of the Pacific from 1879 to 1884 pitting Peru and Bolivia against Chile.

The earthquakes in April of this year in Chile are a reminder of the environmental volatility of the region, although damage from the recent earthquakes was somewhat mitigated. Thankfully, Cushman said, the recent Chile earthquakes did not cause a tsunami, which typically creates worse effects as far as damage and casualties.

“I think this is really good evidence that our continued experience with these massive earthquakes is having an impact on governmental policy and building practices,” he said. “Even though we continue to build things in harm's way, we’re doing so in a way that they are not as vulnerable as they have been in the past.”

Cushman, who was featured in a 2010 episode of the Dutch Radio and Television series “Beagle: In Darwin’s Wake” about environmental issues in Latin America and the Pacific Basin, said the choice to use guano as the vehicle to expand on environmental history of the Pacific Ocean has likely led to much of the international attention to his book.

“It’s an oddity of history. It’s funny,” he said. “But it’s also the sense that excrement is a central part of our existence. One of the things that’s amazing about this, it’s so connected with our everyday lives.”

Cambridge University Press has recently released “Guano and the Opening of the Pacific World” in a paperback edition.