LAWRENCE - This summer nineteen University of Kansas students will share their talents on the international stage when they embark on a whirlwind European tour. 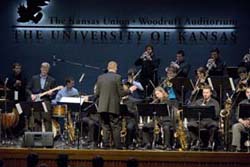 In early July, KU Jazz Ensemble I will play eight shows in 11 days, with dates in France, Germany and Switzerland, including appearances by invitation at two of the world’s most prestigious jazz festivals — the Montreux Jazz Festival and the Jazz À Vienne Festival. The ensemble and its director, Dan Gailey, will be joined on all performances by two special guests - celebrated Kansas City-based jazz vocalist Deborah Brown and Steve Leisring, world-renowned trumpeter and KU faculty member.

Local audiences can preview selections from the repertoire for the European dates at a special kickoff concert at 7:30 p.m. Thursday, July 3, at the Lied Center of Kansas. The event is free and open to the public. It is sponsored by the KU School of Music and the Lied Center. 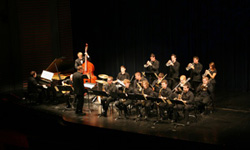 “We are incredibly excited to be invited to perform on major international stages this summer. It is a recognition of the exceptional talent we have in the KU Jazz Studies program and underscores the quality and range of opportunities our students receive,” said Gailey, director of KU Jazz Studies. “The chance for our students to share these stages with major artists such as Deborah Brown and one of our most distinguished faculty members, Steve Leisring, will make this unforgettable experience even more rewarding.”

Jazz Ensemble I is the premier ensemble within the distinguished KU Jazz Studies program. The 19-person ensemble includes graduate and undergraduate students with hometowns as near as Kansas City and as far as New Jersey. For many of the students, this will be their first time visiting and performing outside the United States. Under the leadership of Gailey, individuals or groups in the program have received 19 DownBeat Student Music Awards since 1992. Jazz Ensemble I has garnered three DownBeat Student Music Awards since 1992 in the category of Best College Big Band in the U.S. or Canada.

The group will fly July 4 to Zurich, Switzerland. They will then play four shows from July 5 to 8: the Brienz Jazz Festival in Brienz, Switzerland; two shows at the Montreux Jazz Festival in Montreux, Switzerland, and the Jazz À Vienne Festival in Vienne, France. The tour will conclude with three dates in Germany, beginning in Timmendorfer Strand and Hohenlockstedt. The final show will take place in Eutin, Germany — one of Lawrence’s sister cities — at the Eutin Festival (Eutiner Festpiele). The group will return home July 13.

Born in Kansas City, Missouri, Brown took her musical talents from coast to coast in the U.S., eventually leading her to Europe via Japan and Indonesia, culminating in a 12-year residency in Europe. Brown has made a name for herself with appearances in more than 50 countries around the world, performing at nightclubs, concerts, jazz festivals, and on television and radio soundstages. She has more than 20 recordings as a leader, her latest being "All Too Soon" with special guest Bobby Watson, and she is featured on many others as a special guest artist. Brown has spent the last couple of decades living and teaching off and on in Europe, and she performs regularly in Russia. This is her first time performing with KU’s flagship ensemble.

"I am honored to play with such an accomplished group of musicians,” Brown said. “I have full confidence the KU Jazz Ensemble will make a formidable impression on the European jazz scene."

Leisring, associate professor of trumpet, came to KU in 2003 after performing for 14 seasons with the Tenerife Symphony Orchestra, Canary Islands, Spain. As a member of the orchestra, he can be heard on more than 35 commercial CDs. Leisring has performed in the jazz world with the likes of Gary Foster, Steve Houghton and the legendary Phil Woods.

KU Jazz Ensemble I performers are as follows:

The Montreux Jazz Festival was founded in 1967. Over the years the festival has become a not-to-miss event for music fans in Switzerland and around the world. Its stages have been graced by music’s greats from Miles Davis to Ray Charles and from David Bowie to Prince.

The Eutin Festival (Eutiner Festspiele) was established in 1951 in celebration of the life of composer Carl Maria von Weber, who was born in Eutin. It has been held yearly during July and August in the garden of Eutin Palace in an open-air theater on the banks of the Great Lake of Eutin. 2011 marked a new chapter in the history of the festival when the Eutin Chamber of Commerce established the New Eutin Music Festival. A unique aspect of the New Festival is the partnership with the School of Music to bring outstanding music students and emerging young professionals to Eutin to perform in the festival. This partnership is unlike any other cooperative collaboration in the world, given its ties to professional experience, education and cultural immersion.

KU in the news
The Wall Street Journal — Sat, 10/23/2021
I spent 44 years studying retirement. Then I retired.
The Washington Post — Wed, 10/20/2021
Excluding Black Americans from our history has proved deadly (opinion)
Researchers at @JuniperGrdensKU & @KUMedCenter have a received a new $345K grant to further study “Stay, Play, Talk… https://t.co/UpM16ubpTx
«»
Follow us on Twitter »
Why KU
Apply »
One of 34 U.S. public institutions in the prestigious Association of American Universities
44 nationally ranked graduate programs.
—U.S. News & World Report
Top 50 nationwide for size of library collection.
—ALA
5th nationwide for service to veterans —"Best for Vets: Colleges," Military Times