LAWRENCE — The Dole Institute of Politics at the University of Kansas will screen the documentary “Harvesting the High Plains” at 3 p.m. Tuesday, March 10. This documentary chronicles the challenges two men faced, searching for a way to harvest in the midst of the Dust Bowl Era. Director Jay Kriss will introduce the film and take audience Q&A directly following. 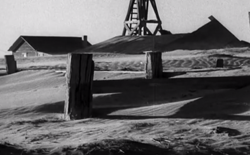 “Senator Dole is a part of our state’s agricultural history as he worked tirelessly for legislation to help farmers,” said Dole Institute Director Bill Lacy. “That is why we always enjoy having the opportunity to further highlight this industry’s importance on the state, national and world levels, and this documentary is one that does so in the context of a historic and catastrophic U.S. weather event.”

Just as the U.S. was beginning to rise from the Great Depression, nature waged a war on the Great Plains. “Harvesting the High Plains” follows the risks that John Kriss, a farmer from Colby, and Ray Garvey, a Wichita entrepreneur, took to cultivate land in Western Kansas and Eastern Colorado. Because of their hard work, harvesting was possible, and thus the land became the "Breadbasket of the World."

The film is inspired by the novel of the same name, written by Craig Martin, a professor at Wichita State University. It is narrated by Mike Rowe, of Discovery Channel’s "Dirty Jobs," and has been featured on PBS affiliate stations across the U.S.

To conduct background research for the film, Kriss utilized the Kansas State Historical Society and the archived letters of the two farmers, who wrote to each other almost every day. They also researched letters to banks and high-level officials, such as secretaries of Agriculture. In all, approximately 30,000 documents were available. Additionally, an old Works Progress Administration film, “The Plow That Broke the Plains,” was purchased, and much of the raw footage it used was digitized through the National Archives and the Library of Congress and used in “Harvesting the High Plains.”

Kriss has more than 34 years of experience as a camera operator and cinematographer and is now a director. In addition to “Harvesting the High Plains,” Kriss has also directed the documentary “1000 Miles.” He currently works on his own projects through his production company, Inspirit Creative, with partner Sydney Duvall.

The event is free and open to the public. Refreshments will be served.

The Dole Institute of Politics is dedicated to promoting public service, civic engagement and politics. It is located on KU’s west campus and, in addition to the Robert J. Dole Archive & Special Collections, offers free public programming with world-renowned guest speakers on a variety of topics that intersect politics, as well as opportunities for students of all ages.

For more information on this or any Dole Institute events, visit www.doleinstitute.org or call (785) 864-4900. The Dole Institute of Politics is dedicated to promoting public service, civic engagement and politics. It is located on KU’s west campus next to the Lied Center.

Image via "Harvesting the High Plains."