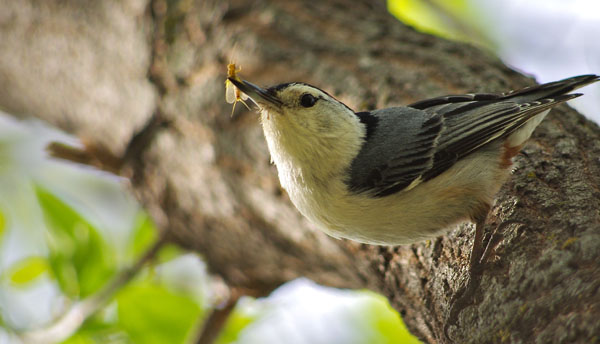 LAWRENCE — Genomic sequencing of White-breasted nuthatches populating isolated mountains in Southern Arizona shows pressure to adapt to unique habitats prompts genetic branching among clades of the birds, rather than distances separating the “sky islands” where they live. 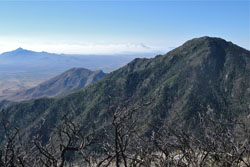 “Non-random gene flow is causing these birds to become genetically distinct based on certain environments,” said Joseph Manthey, doctoral student at the University of Kansas’ Biodiversity Institute. “As the nuthatches can fly, their ability to disperse suggested they’d either be able to move easily between nearby sky islands or not at all because of distances between them. So I was expecting a pattern of isolation-by-distance — or that some sky island populations were genetically distinct due to isolation from other populations. “

Instead, the researchers found variations in temperature and rainfall-triggered genetic differences between the clades of nuthatches — not expanses separating them. The Madrean Sky Islands feature changes in habitat along elevational gradients in mountains.

“In this region, habitat at the base of the mountains is desert, while the higher elevations have coniferous forests. In this way, they act as islands to species that require the forests to survive,” Manthey said.

Manthey’s paper, co-authored by Robert Moyle, associate professor of ecology and evolutionary biology, has been hailed as a “blueprint” for future isolation-by-environment studies. It soon will be published in the peer-reviewed journal Molecular Ecology.

The research stands out because of its detailed analysis of the nuthatches’ genetic profiles. The investigators examined single nucleotide polymorphisms — or, mutations at a single spot in the nuthatches’ genome. “We were looking for loci that might be under selection, or genetic locations that are important for adaptation to specific environments,” Manthey said.

He added the new technique differs from previous landscape genetics studies identifying genetic variation because earlier efforts didn’t pinpoint where variations happened in the genome or if they were close to specific genes.

The researchers used the KU Genome Sequencing Core’s resources, including an Illumina HiSeq2500, which takes genomic samples and gives back millions to billions of short sequences of the genome. The instrument incorporates fluorescent dyes during replication, which is taking place in millions of genetic fragments at a time and snaps pictures of each of the fluorescence events.

In this way, the investigators were able to isolate genetic changes and tie those to unique environmental factors in the Madrean Sky Islands.

Manthey is conducting similar studies in the sky islands on other species of bird, as well as ants and pine species, to see if these results hold true beyond the nuthatches.

“This region is the only biodiversity hotspot of North America, which is an area that contains a high level of biodiversity, as well as being threatened with destruction, either through human landscape change or climate change,” he said. “Understanding more about limitations of how plants and animals are able to disperse through this landscape gives us insights into how species will react to the inevitable future changes and how we may better conserve these natural resources.” 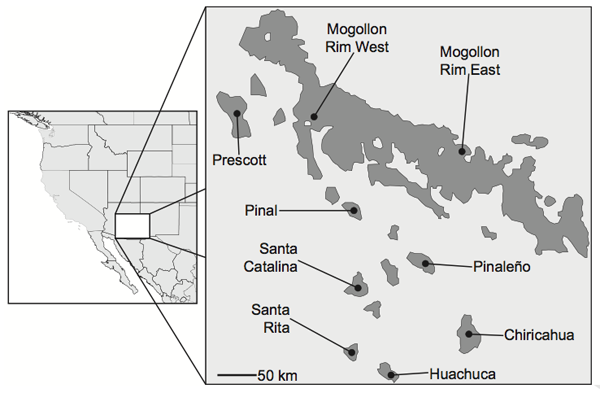 At right: The view from Carr Peak in the Huachuca Mountains, one of the southernmost sky islands in the U.S. It shows the transition from forest in the foreground at high elevations to desert below. The background is looking into Mexico, where there is a barely visible forest fire.