LAWRENCE — Two University of Kansas professors walk the halls of the same university, teach many of the same students and collaborate on research, yet they traversed different paths to get there, with results that diverge even today.

One grew up in a working-class town fallen on economic hard times, his family often suffered through layoffs, and they imagined that a football scholarship was his only way out.

The other grew up in an upper-middle-class family with grandparents who had opportunities to save enough to put her through college debt-free; surrounded by supporters, she knew all along she’d earn a degree.

William Elliott III walked the former route, and Melinda Lewis traversed the latter. They have co-authored “The Real College Debt Crisis: How Student Borrowing Threatens Financial Well-Being and Erodes the American Dream.” They open their book by sharing their respective stories to illustrate the problems with America’s reliance on student debt to pay for higher education.

“In our own narratives, we find evidence of the fragility of the effort plus ability equation that constitutes the core of the American Dream, and we see the imprint of a flawed financial aid paradigm in our own lives,” Elliott and Lewis write. “In our histories and in the futures of American children, we see the limitations of what individual exertion can deliver in terms of equitable outcomes without the support of equitably supportive institutions. We do not share our own stories in search of sympathy or admiration but, instead, as a tangible reminder that real lives are at stake in today’s policy debates around student loans and that the imprint of our policies can be vividly felt, when we are honest about our own journeys.”

Elliott, associate professor and director of the Center on Assets, Education and Inclusion in the School of Social Welfare; and Melinda Lewis, associate professor of the practice, argue that student debt has reached a point in which revolution is necessary, just as the Homestead Act in the 19th century and the G.I. Bill in the 20th century drastically changed which Americans could succeed economically. The American Dream has always held that hard work plus ability will allow individuals to better themselves financially. However, so many students are graduating college with crushing debt they are unable to buy homes, get married or begin saving for their own children’s futures.

Through part one of the book, Elliott and Lewis provide evidence of a crisis in the basic paradigm upon which the American higher education funding institution is built: 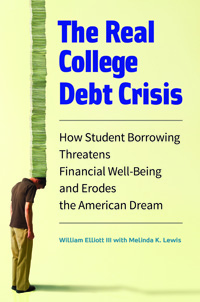 By exposing the cracks in the current paradigm and illustrating how it is increasingly unable to solve the problems it was intended to address, the authors intend to help push the national conversation in the direction of finding a new solution. In part two of the book, they articulate viable alternatives to the current model of debt dependence, namely child savings accounts, or CSAs.

“What we hope to communicate is more than just, ‘Yes there is a crisis,’” Lewis said. “We’re looking for ways policy and a new look at the science of the field can lead to a solution. The problems with our reliance on student loans are bad enough that we need new metrics to determine its true scope and to judge the alternatives we construct.”

The higher education funding system is reeling from years of recession-era budget cuts and the results of overreliance on student borrowing, but Elliott and Lewis argue education is still the best hope to continue upward economic mobility for all citizens. However, without accurate analysis of the dimensions and causes of the problem, policy changes likely will fail to bring about change and may even exacerbate the issue. For example, some proposals, such as free study at two-year colleges, could increase inequity in the system by funneling disadvantaged students to certain types of institutions, and repayment plans that extend the borrowing period of indebtedness may exacerbate the financial effects of borrowing, they argue.

The key in escaping the debt cycle lies in shifting from loans as the primary method of paying for higher education to assets, Elliott and Lewis write. Through the book’s closing chapters they illustrate how assets, even meager savings accounts, provide a launching pad for economic mobility. The authors also illustrate how CSAs can serve as “the next evolution in financial aid” and bring about a beginning of a revolution in the U.S. approach to financing higher education.

Too often in the debate about student debt people focus on the wrong question. Instead of asking whether or not individuals are better off after graduating from college, the question should be “whether students who have to borrow to finance their college educations are able to attain equitable outcomes compared to those who did not have to borrow for higher education,” Elliott and Lewis write.

Without such a shift in national policy and approach to thinking about higher education funding, an unequal system will persist. Situations similar to the authors’, where both worked hard and earned similar degrees, but one graduated with substantial debt while the other finished nearly debt-free, will continue and likely prevent many disadvantaged students from seeking an education and achieving the American Dream.

“Through this lens, it becomes clear that debt dependence is fundamentally incompatible with the American values of equality of opportunity and a threat to American insistence that merit, not oligarchical privilege, should determine one’s fate,” Elliott and Lewis write.