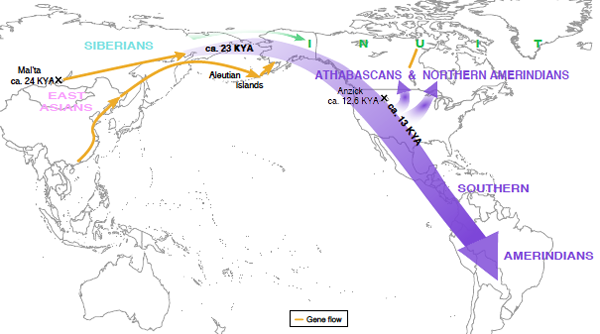 LAWRENCE — A new genome-scale study that includes a University of Kansas anthropological geneticist has determined ancestors of present-day Native Americans arrived in the Americas as part of a single-migration wave from Siberia no earlier than 23,000 years ago.

Later migrations of Aleuts and Eskimos occurred approximately 9,000 and 4,000 years ago.

"Using coalescence analyses, not just using one piece of DNA, but the entire genome, we find that the earliest someone could have come to the Americas was 23,000 years ago," said Michael Crawford, head of KU's Laboratory of Biological Anthropology and a professor of anthropology. "This study also pretty well does in the whole idea that gene flow from Europe contributed to the original migration of present-day Native Americans."

Crawford is a co-author on the study, and the journal Science has published its results online. The Center for GeoGenetics at the University of Copenhagen headed the international research team, which included co-authors Eske Willerslev, a Lundbeck Foundation professor at the center in Copenhagen; Maanasa Raghavan, a postdoctoral researcher at the center; Yun Song, a professor of electrical engineering and computer science, statistics and integrative biology at University of California, Berkeley; and David Meltzer, an anthropology professor at Southern Methodist University, among others.

To more accurately pinpoint the account of how and when modern humans populated the Americas from Siberia, the team generated genomic data from several present-day and past Native American and Siberian populations. This included an analysis of the DNA of the fossil known as Kennewick Man, found along the Columbia River in Washington State in 1996.

"This is not just mitochondrial DNA," Crawford said. "It's shown on the entire genome that's been sequenced."

Crawford is an expert on genetic markers of Siberian human populations. He led the first foreign anthropological team into Siberia in 1989 after the breakup of the Soviet Union. He also worked with Willerslev's research team on Paleo-Eskimo migration patterns from Siberia, which occurred thousands of years after the migration in the study released this week.

They found the ancestors of all present-day Native Americans entered the Americas from Siberia into what is now Alaska no earlier than 23,000 years ago. The group did split into the Athabascans and Amerindians, and after no more than an 8,000-year isolation period in Beringia — the land bridge that once connected Siberia to Alaska — they began to populate the Americas mostly to the south. Earlier studies had hypothesized about a longer isolation period.

The research team was also able to separate gene flow — though a weak genetic connection — between some Native Americans and groups related to present-day East Asians and Australo-Melanesians, including Papuans, Solomon Islanders and South East Asian hunter-gatherer groups. Willerslev said the team could not exactly say how and when this gene flow occurred but that it was possible it came through Aleutian Islanders living off the coast of Alaska.

A past hypothesis in the field had suggested that populations related to Australo-Melanesians were part of a separate migration that gave rise to the earliest Americans, known as Paleoamericans, whom ancestors of today's Native Americans replaced.

This hypothesis was based on cranial morphology, but a deeper analysis of the genome in this study on historical Central and South American populations found no evidence they were closely related to Australo-Melanesians. They could have possibly mixed in later after the initial migration if they were brought to he Americas as slaves, Crawford said.

"It has nothing to do with gene flow early on," he said. "It was gene flow much later."

Overall, the team's study provides a clearer picture for how Native Americans began to populate the Americas — something scientists have argued about in research for centuries.

"Some of the most important questions people ask is who are we? Where did we come from?" Crawford said. "Now, thanks to genetic analysis, the picture is clearer for Native Americans. They came from Siberia."

Image courtesy of Science magazine and the Center for GeoGenetics at the University of Copenhagen.