LAWRENCE — Disability and race weigh heavily on the school experience of millions of young people, yet disability studies and critical race theory rarely look at how the two intersect. A University of Kansas professor has co-edited a book examining how disability and race together affect the education system, from labeling certain students as “abnormal” in learning and behavior to forcing young people into the school-to-prison pipeline.

“DisCrit — Disability Studies and Critical Race Theory in Education” brings together leading figures in disability studies and critical race theory. Edited by David Connor of Hunter College, Beth Ferri of Syracuse University and Subini Annamma, assistant professor of special education at KU, it was born from a 2013 scholarly article authored by the book’s co-editors that forged new ground in examining how race and disability intersected in education.

“We looked at how race and disability are inextricably linked,” Annamma said of the original article. “These two theories have had a tendency to deny each other. We are trying to open up a more productive conversation between the two.” 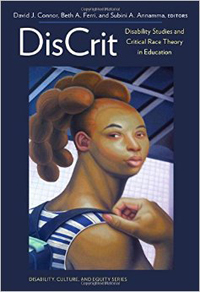 The book examines the topic in six parts:

Among the book’s chapters, authors explore topics such as culture’s effects on learning and how racism and ableism are part of school and community in cases such as the George Zimmerman shooting of Trayvon Martin. Elizabeth Kozleski, chair of KU’s No. 1-nationally rated Department of Special Education, authored a chapter on how large-scale data focuses on certain categories such as race and disability while ignoring the intersections between the two, which puts focus on such topics at the expense of others.

On a larger scale, the book examines how certain students are labeled. Once a student is labeled as having a certain disability or belonging in special education classes, it is often difficult for the student to shed that label. This is important because research has shown for many years that minority students are overrepresented in special education classes and minority students with disabilities are overrepresented in suspensions from school and juvenile jails.

The book, published by Teachers College Press, includes the original article upon which the book is founded, as well as an introduction from the editors and a conclusion chapter examining critical conversations across race and disability.

Annamma is working on a new book that shares the stories of young minority girls with disability in a maximum-security prison and examines their perceptions of how they ended up in the facility. The field of education and education reform often focus on adults’ solutions to inequities.

“In doing so, education ignores the insightful perspectives of young people who are most affected by those inequities,” Annamma said.

“DisCrit” can be of value to educators, policy makers, school administrators, advocates and anyone interested in why America’s education system is failing some students and how to address the problems. Decades of overrepresentation of minority students and students with disabilities shows that, even though it may not be intentional discrimination, certain groups of students are being labeled and ultimately failed by the U.S. education system.

“Racism and ableism are perpetuated in our schools. We are yet to find a body of research that consistently shows kids with disabilities and kids of color are actually acting out more, even though they are being pushed out of our schools. Instead, multiple studies have shown that kids of color and those with disabilities are being punished more often and more harshly for the same behaviors as their peers,” Annamma said. “It’s not about faulting educators, but holding ourselves accountable for what’s happening. We need to ask ourselves why we’re not willing to serve all kids.”