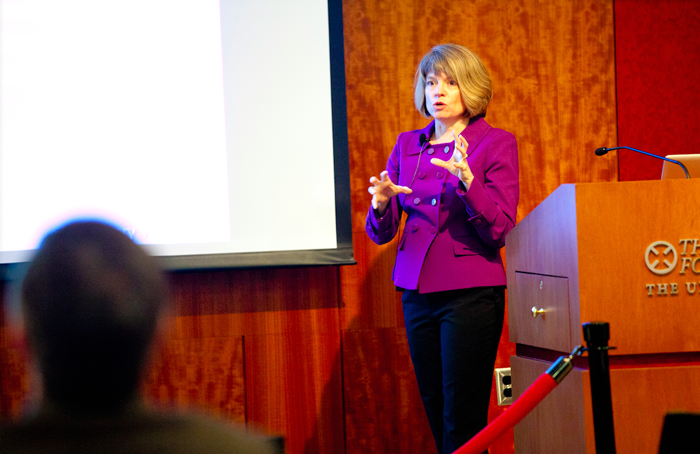 LAWRENCE — Race, not gender, appears to be the most significant factor influencing the award of a National Institutes of Health Research Project Grant, according to a new study led by a University of Kansas economist.

"In most cases, NIH funds are the gateway to having tenure and becoming a full-fledged member of an academic faculty," said Donna Ginther, professor of economics and the study's lead author. "Understanding who gets grants in order to promote a more diverse applicant pool will add to the diversity of the student body at colleges and universities."

The research follows a 2011 Ginther-led study in the journal Science that found a 10 percentage-point gap in research funding between black and white applicants. The NIH, the world's foremost biomedical funding agency, in response to that study announced new initiatives to combat the discrepancy.

The new study, which is scheduled to appear in the August issue of the journal Academic Medicine, did contain some decent news, Ginther said, because the data showed white women have a slight advantage over men in the receiving NIH Type 1, or R01, awards.

"If women of color are disadvantaged, it has to do with race, not gender," said Ginther, who is also director of the Center for Science Technology & Economic Policy at the KU Institute for Policy & Social Research.

Applications for NIH funding go through a peer review process that considers the significance, innovation and approach of the grant application, and approximately half of the proposals are discussed and assigned a priority score. Among those scored, budgets and NIH institutes' priorities determine which applications are funded.

Applicants self-identify race, ethnicity and gender, but that information is not available during the peer review. However, biographical facts included in the review materials can provide clues to the identity of the applicants, the researchers said.

The new study that examined R01 awards from 2000 to 2006 along the lines of race and gender also reflected the following:

The researchers recommend policies designed to encourage women and men of color to submit revised and additional grant proposals to increase their chances of receiving NIH funding.

"Rejection of proposals is par for the course. It’s important that researchers understand that they need to talk with their program officer, revise the proposal and try again," said Ginther, noting that many women and minority applicants tended not to submit multiple proposals.

She said the findings of the success of the likelihood of women applicants to earn funding indicate some progress in academic science. For example, other studies have shown that research teams that include women had contributed to changes in how products and medical devices were designed.

Last year, NIH issued a directive that researchers must take gender into account in all research designs. Studies now show that even with mice, that female response to pain is different than with men.

Ginther said that additional policies are warranted to address the racial gap among NIH awards. For example, NIH has developed a mentoring network for minority scientists to help encourage them to remain in the field and in pursuit of faculty positions and tenure, she said.

"Science is a high-risk enterprise," Ginther said. "So you want to have as many qualified people working in science as possible. You don't want to make it the exclusive domain of a select few."