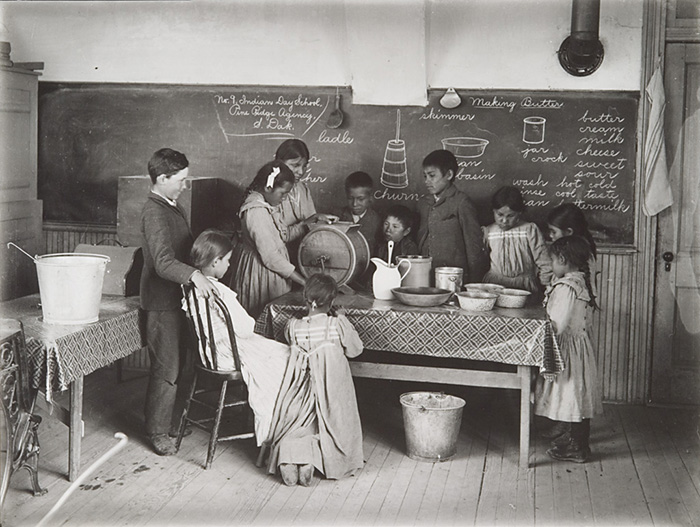 LAWRENCE — The Spencer Museum of Art has been awarded a $159,049 federal grant from the National Endowment for the Humanities to organize two weeklong workshops for K-12 teachers. These events will be supported by the NEH Landmarks of American History and Culture program, which awards up to $160,000 to support projects that use historic sites, primary sources and scholarly works to understand important issues in American society. The Spencer’s workshops, “Native American and African-American Educational Experiences in Kansas, 1830–1960,” will explore the complex history of racial disparity and discrimination in U.S. education through the lens of cultural landmarks in Kansas.

“This grant will allow the museum to engage educators on topics that are not only historically significant but also of present-day urgency and relevance,” said Saralyn Reece Hardy, Marilyn Stokstad Director of the Spencer Museum.

The workshops will focus on the educational experiences of Native Americans and African-Americans in Kansas from the passage of the Indian Removal Act of 1830 through the 1954 Supreme Court decision in Brown v. Board Education of Topeka and its immediate aftermath. Participating teachers, who will be named as NEH Summer Scholars, will join Spencer Museum staff as they encounter the Shawnee Indian Mission State Historic Site, Haskell Indian Nations University, the settlement of Nicodemus, the Sumner High School Alumni Room and the Brown v. Board of Education National Historic Site.

KU Associate Professor of History Kim Warren, who will serve as a keynote lecturer and faculty member for the project, said that Kansas has been a flashpoint for national debates over freedom, equality and education.

“It’s a wonderful opportunity for teachers from around the country to understand not only the racialized history of American educational systems but also the complicated and pivotal role that Kansas has played in that history,” Warren said.

In addition to visiting historical landmarks, teachers will engage with primary source material from KU’s Spencer Research Library, the National Archives at Kansas City and the Haskell Cultural Center and Museum. The Spencer Museum will also host a related exhibition showcasing its strong collection of art pertaining to Native American and African-American history and culture.

“The project and related exhibition will allow the museum to serve as a site for critical conversations about race, multiculturalism and discrimination in the United States,” Mesick said. “With attitudes toward race appearing in the forefront of American consciousness, we look forward to facilitating exploration of these issues through art.”

The Spencer Museum’s workshops will enable and encourage K-12 educators to interact with leading scholars. In addition to museum staff, 10 experts will participate in the workshops as project faculty, providing keynote lectures and tours, offering interactive seminars, and facilitating conversations and panel discussions with community activists. The interactions and relationships will help build important communities of inquiry, enhancing K–12 teachers’ knowledge and appreciation of subject matter, and providing university faculty insight into the frontlines of American education.

The workshops will also allow the Spencer Museum to engage one of its key constituents: teachers.

“As a university art museum, the Spencer regularly enjoys a strong and growing relationship with faculty and students at the higher education level,” Straughn said. “We’re excited to extend and strengthen our networks with educators working with younger generations of learners through this NEH Landmarks grant.”

The educator workshops will take place in June and July 2017. One of the first tasks that project directors will undertake is creating a website to publicize the workshops to interested educators, who can apply to become Summer Scholars through the NEH in the early spring.

In the intervening months, project directors and faculty will develop and fine-tune the curricula to ensure participating teachers enjoy an academically rigorous and stimulating experience.

Photograph from the Spencer Museum’s collection showing Native American students at the Pine Ridge Indian School in South Dakota. This is one of many works of art the museum will display in an exhibition organized in conjunction with its NEH Landmarks of American History and Culture project.