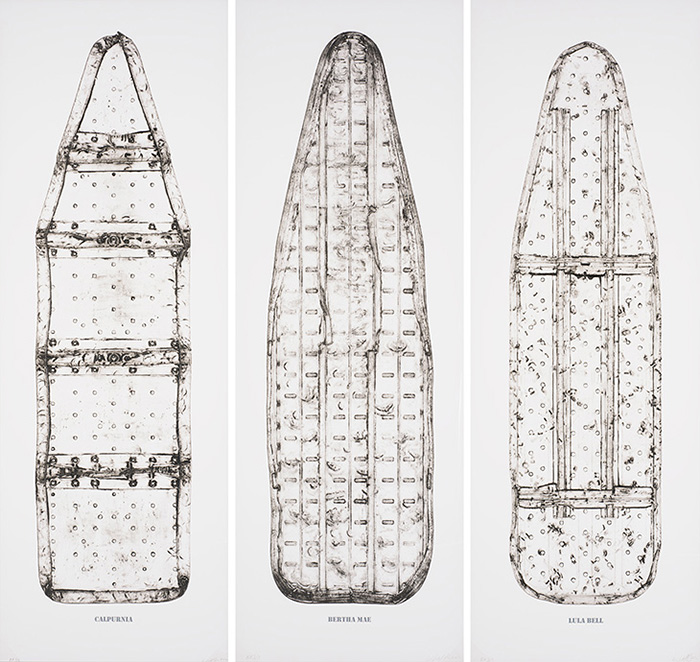 LAWRENCE — In conjunction with the University of Kansas selection of “Between the World and Me” by Ta-Nehisi Coates as the 2016–2017 Common Book, the Spencer Museum of Art has selected three prints by artist Willie Cole as the accompanying Common Work of Art. Framed as an intimate letter to Coates’ adolescent son, “Between the World and Me” delves into the narrative of race in America and that narrative’s particular effect on black Americans. Similarly, Cole’s work explores race, culture and inequality through his innovative use of domestic objects.

The three selected prints — “Calpurnia,” “Bertha Mae” and “Lula Bell” — are from a 2012 series of works by Cole titled “Beauties.” Cole printed the “Beauties” from metal ironing boards that he acquired secondhand. He and his assistants flattened the ironing boards by driving over them with cars, beating them with hammers and running them through the etching press until they were less than 1/8 of an inch thick. The resulting prints, displayed vertically, resemble not only their domestic antecedents but also shrouded figures and 18th-century diagrams of slave ships. Driving home this relationship, the prints are titled with names referencing Cole’s ancestors, iconic slaves and domestic servants from literature.

Kate Meyer, Spencer Museum assistant curator for works on paper, said Cole’s prints were selected as the Common Work of Art because they parallel the discovery process of reading “Between the World and Me.”

“When you read the book you imagine the subject, Coates himself, and the experience of being a black man in America today, more complexly. Likewise, experiencing the ‘Beauties’ rewards your contemplation. The subject gains rich associations through the process of looking, discussing and sharing,” Meyer said.

Although the prints evoke notions of servitude and slavery, Cole says he does not project these associations: “I bring it out. The objects have a memory and history of their own. So if you have a slave, or just a domestic worker, people working for little money, their objects have a memory of that experience.”

The Common Work of Art prints will be on display, along with related works from the Spencer’s collection, in the museum’s newly renovated Teaching Gallery. The museum’s galleries will reopen to campus and the public Oct. 15 after a major 15-month renovation. The museum will also collaborate with KU’s Office of First-Year Experience to incorporate the Common Work of Art into Common Book programming.

“The Common Work of Art contributes to different modes and perspectives for students to engage more fully in the ideas generated by the Common Book through courses and co-curricular programming,” said Howard Graham, associate director for academic programs in the Office of First-Year Experience.