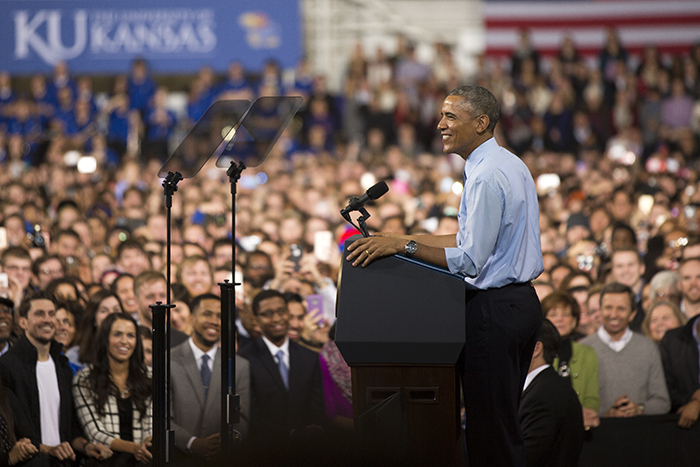 LAWRENCE – Donald Trump used Twitter and reality television as launching pads to win the presidency. And while President Barack Obama is no social-media slouch, it was, in large measure, his oratorical skills that helped propel him to the nation’s highest office.

As the president prepares to deliver his final address Tuesday, Jan. 10, University of Kansas Professor of Communications Studies Robert Rowland, an expert on presidential rhetoric, has compiled a list of Obama’s “greatest hits.”

Rowland was himself a national debate champ while a college student, and he says he has been influenced by the German sociologist Jurgen Habermas’ writings about the public sphere, “where we have give and take, and, hopefully, sensible decisions are reached.”

Rowland has specialized in the rhetorical legacies of presidents Ronald Reagan and Obama, whom, he says, are not such strange bedfellows as they might seem at first glance. Both men, he said, are or were excellent communicators, raising the sights of their fellow citizens to lofty national ideals. Rowland is the author of, among other books, “Reagan at Westminster: Foreshadowing the End of the Cold War” (2010, Texas A&M University Press). He’s working on a couple of books about Obama.

Rowland accepts the conventional wisdom that Obama’s trail to the presidency was blazed by his acclaimed speech at the July 2004 Democratic National Convention backing that year’s nominee, then-fellow U.S. Sen. John Kerry.

“That was the most important speech he ever gave,” Rowland said. “That was the one where he said there are no red states or blue states, but that we are the United States of America. It’s part of the core message he maintained throughout his presidency: That we are different on the surface, but fundamentally we are more alike.”

Others in and just beyond Obama’s rhetorical Top Ten, according to Rowland:

“This is where he says ‘in the unlikely story of America, there has never been anything false about hope,’ and he uses the refrain ‘yes, we can,’ which became part of a video made by will.i.am and Jesse Dylan,” Rowland said.

“He talks about ‘the winter of our sorrow.’ It’s somber. The tone of it was criticized at the time. It’s not inspiring like ‘yes, we can,’” Rowland said.

“It’s the story of America gradually becoming more welcoming and inclusive,” Rowland said. “It’s the communitarian America of Obama, not the individual striver of Reagan. It talks about the things we can only do together. … At the ’08 convention, he talks about the evolution of the American dream. He talks about a young preacher from Georgia, and you realize it’s Martin Luther King Jr. He samples his greatest hits all the time, like Reagan’s ‘City on a hill’ and “Rendezvous with destiny.’ ”

“This is also called his ‘Race Speech,’ and it was delivered after the controversy over remarks made by his minister, Jeremiah Wright,” Rowland said. Wright infamously used the phrase “God damn America,” forcing Obama to repudiate some of Wright’s remarks but refusing to totally disavow him.

“He sees things from both sides,” Rowland said.

“He spoke along with the civil rights icon Congressman John Lewis … of progress that had been made in moving the nation closer to the more perfect union, but also of the need for more progress.  He used John Lewis as a model of fighting for justice,” Rowland said.

"This was where he broke down in tears and said, ‘Every time I think about those kids, it gets me mad,’” Rowland said. Obama called for action to control gun violence while preserving the Second Amendment.

This was where Obama sang “Amazing Grace” to highlight his theme of grace in the aftermath of a shooting spree inside a black church by a white supremacist who killed nine people.

“He talks about the trail from Seneca Falls, where the women’s rights movement was born in 1848, to Selma to Stonewall,” Rowland said. “Lincoln’s is the only other second inaugural address that was better than the first.”

“This is a policy-oriented speech where he reads a letter from Sen. Edward Kennedy that Kennedy wrote before he died, saying that ensuring health care for people is about the quality of our character as Americans,” Rowland said.

Finally, Rowland said, a speech Obama delivered in Kansas was among his best. Delivered during the run-up to the 2012 election, this speech represented a political pivot.

“In ’08, he was transformative,” Rowland said. “It was going to be a new politics. … Then came the debt-ceiling crisis in 2011, when he went as far as possible to meet the other side, and then he puts it aside and shifts to a theme of fairness, a la Bernie Sanders. In Osawatomie, he says everybody needs a fair shot, and everybody needs to pay their fair share. After his re-election, he drove a hard bargain and raised the top income tax bracket, and since then income inequality has declined in this nation.”