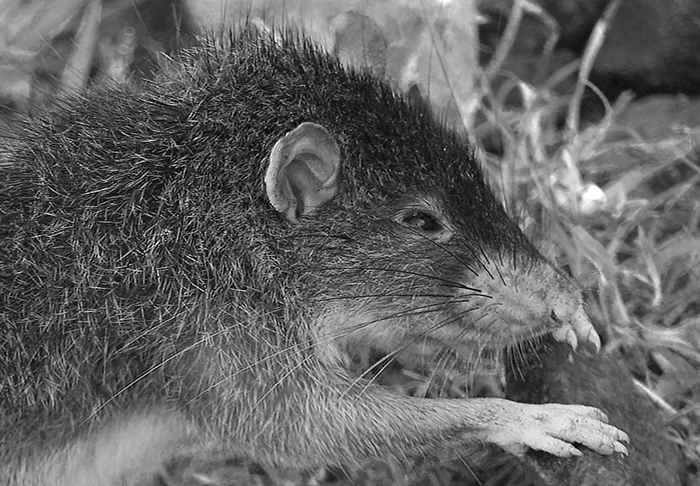 LAWRENCE — A newly discovered mammal in the Pacific has earned worldwide attention after scientists named it Rattus detentus to call attention to an Australian detainee center on the animal’s home island. Recently, the new animal was featured as a top scientific discovery of 2016 in Discover magazine’s “Year in Science” issue.

For decades, scientists had suspected an unnamed animal was inhabiting Manus Island, part of the Papua New Guinea Admiralty Group.

“Its bones and teeth were known for quite some time,” said Robert Timm, professor in the Department of Ecology & Evolutionary Biology and curator emeritus in the Biodiversity Institute at the University of Kansas. “For thousands of years, indigenous people on that island would eat them, and we know that because of middens — discarded trash from people’s kitchens. So we had lots of older fragmentary remains but no modern specimens. We knew of its existence because of skeletal remnants from only one rock shelter."

That all changed recently when biologists working with Conservation International and a graduate student from Finland, conducting research for his dissertation on Manus Island, located the first contemporary example of the rare rodent.

“Local residents on the island continue to set traps to capture these rats and other wildlife for food,” Timm said. “We now have three modern specimens. The first two consist of discarded bones from meals and were salvaged in 2002.”

In 2012, the graduate student obtained a fresh specimen that was captured in a snare by a local boy working with him.

“Now, we have a beautiful specimen to work with and well-preserved DNA,” Timm said. “The DNA is critical in ascertaining where this species belongs in the tree of life.”

Although the rodent’s relationship to other species is now understood, Timm said the habits and abundance of Rattus detentus remain shrouded in mystery.

“We actually know almost nothing about its behavior because it’s so hard to find,” he said. “We believe it specializes on eating big seeds that are hard to chew into, because of the teeth. One of our Australian colleagues worked very hard to find more of this newly recognized species using camera traps and a variety of other techniques, and he didn’t find any evidence of them whatsoever. That suggests there aren’t very many of them left.”

Manus Island is now best known for the Manus Regional Processing Center, an immigration detention facility operated by the government of Australia. The facility has drawn the ire of human rights groups throughout the world.

The word detentus is Latin for “detained” and is meant to indicate the isolation of this animal on Manus Island and the recent use of the island to detain people seeking political or economic asylum. (Last August, Australia announced its intention to close the center, although a timetable for closure remains unclear.)

In addition to humanitarian concerns, Timm said the sprawling center contributes to a deteriorating habitat for the newly discovered species. Further threats include other wildlife, along with the introduction of domestic cats on Manus Island and widespread logging.

“There is significant deforestation there and no replanting of these beautiful tropical forests,” said the KU researcher. “Some sections of it are still wonderful, with high trees, thick luxurious growth — lots of habitat for all sorts of plants and animals. The problem is that now there are too many people and not enough care taken of the habitat.”

Photo: The Rattus detentus. Photograph courtesy of the Journal of Mammalogy and Valter Weijola.