LAWRENCE — Traditionally, scholarship on Hinduism has been limited by a common view that prayer refers primarily to spontaneous outpourings of the heart.

However, a University of Kansas researcher has examined a collection of literary hymns from 14th-century Kashmir to argue that carefully constructed poetry has been a key feature of prayer in India for centuries. 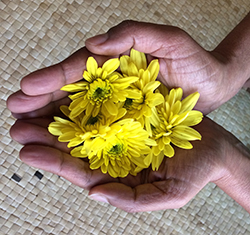 "When prayer has been used to analyze religion in India, it's been used in a relatively narrow way," said Hamsa Stainton, assistant professor of religious studies. "The study of Hinduism in India has been hindered in some way by this limited perspective of what prayer is. There are a wide variety of genres, texts and practices that can be fruitfully discussed in terms of prayer. What happens when we do that is we start to think about prayer differently as well."

In his study recently published in the International Journal of Hindu Studies, Stainton translated and analyzed a collection of literary hymns in Sanskrit, known as stotras, titled the Stutikusumāñjali and composed by Jagaddhara Bhaṭṭa.

Jagaddhara,​ for example, offers interpretations of how poetic prayer works, including the classic Indian practice of making an offering to a deity. At a Hindu temple, a devotee makes an offering, such as flowers or fruit, then frequently receives back a small portion of such flowers or fruit as a physical expression of the deity’s grace. Similarly, poetic hymns are first presented as a verbal and aural offering to their primary addressee, the deity, then they are enjoyed by their secondary audience of human devotees.

Stainton said scholars have often overlooked these types of hymns because prayer was so narrowly viewed as a spontaneous act. Critics also have considered the stotra as being "too poetic," he said.

However, he argues a deeper analysis of the hymns can help people to think about prayer in general differently as well.

"When we look at this case study, we see that this author mixes intense personal devotion with elaborate, dense, sophisticated poetry so that his entreaties and his invocations of auspiciousness and other types of prayer are intrinsically poetic in how he presents them," Stainton said. "He cares about them as poetry. It matters that they're poetry. It's not secondary."

In addition to the recent article, Stainton is working on a book-length project about examining the functioning of poetry as prayer. He said Jagaddhara’s hymns provide a valuable starting point for this type of analysis.

"He's not just offering a prayer and then saying I'm going to make it poetic so that it's more palatable to other people," Stainton said. "There's something inherently important about the beauty and the poetry of it."

Scholarship of prayer in Christianity followed a similar path, he said. Now people generally recognize the diversity of prayers, including the use of songs and poetry, like in the Psalms or other texts, and the meditative practice of lectio divina, “divine reading.”

In India, older patterns of thinking have subscribed to more romantic assumptions of prayer as a spontaneous outpouring of ideas instead of potentially sophisticated poetry that might require study and contemplation to fully appreciate, and which could potentially be read or sung for a public audience.

"The reality is that most prayers we have access to are public, they're often texts that are for teaching others," he said. "They are models. I'm trying to bring this particular genre into a larger conversation about the history of Hindu literature, the history of devotional practices and literary theory in India."