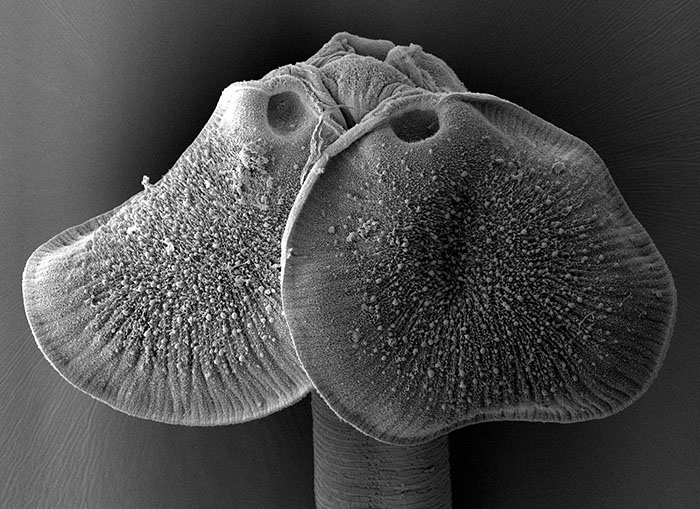 LAWRENCE — Before setting out to assemble a 400-page tome on tapeworms, it might be a good time for a gut check.

That’s what researchers have spent nearly a decade doing: collecting tapeworms from the digestive tracts of vertebrate species in 54 nations around the planet, on a scholarly mission to discover and describe cestodes, commonly called tapeworms. More than 200 new species were described, and the project shaped a better understanding of their planetary diversity. The work had several objectives: 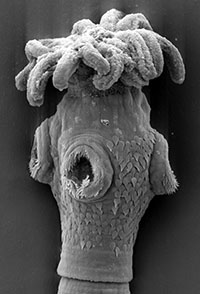 The result of this work is a special publication titled “Planetary Biodiversity Inventory (2008-2017): Tapeworms from the Vertebrate Bowels of the Earth,” just published by the University of Kansas Museum of Natural History.

“This special publication ended up being a summary of what we knew before the National Science Foundation grant awarded in 2008 and a compilation of what we know as a result of all the project activities done as part of the grant,” said co-editor Kirsten Jensen, KU professor of ecology & evolutionary biology and senior curator at the KU Biodiversity Institute.

According to Jensen, the work includes authoritative lists of all known tapeworm species (with the exception of members of one order) that inhabit vertebrates in the world as of 2017.

“What makes this such an amazing resource is that we addressed most aspects for each tapeworm order that a reader might want to know — such as in what species are they found, where are they found throughout the world, what do these organisms look like, and how many are there? Also, we have some estimates of diversity in general. We asked each contributor to add a list of valid species to the end of almost every chapter. So, to date, we know of almost 5,000 species of tapeworms and estimate there to be as many as 20,000 species.”

Jensen, a parasitologist specializing in the systematics, diversity, geographic distributions and host associations of the tapeworms that parasitize elasmobranchs, said cestodes were “poorly known and maligned.”

“There are certainly some tapeworms that cause disease in humans and animals of economic importance, but the vast majority of them, in terms of overall diversity, don’t necessarily cause harm, or harm hasn’t been documented,” she said.

According to Jensen, the animals that most commonly host tapeworms include birds, sharks, stingrays, shrews and catfish — and their tapeworms tend not to bother them.

“For example, birds don’t die because they have tapeworms,” she said. “Their tapeworms aren’t necessarily debilitating. In general, most tapeworms we look at are about a centimeter in total length. If you think about tapeworms that are 30 feet long in larger mammals or humans, those are the exception. The word ‘yuck’ comes to mind because they’re in the digestive system. But on the other hand, they are truly amazing.”

Jensen pointed to several examples of the tapeworm’s distinctiveness. For instance, most cestodes inhabit multiple host creatures throughout their lifespan.

“They have complex life cycles,” she said. “The adult tapeworms that live in sharks and stingrays release their eggs into the environment. Their first hosts are small crustaceans like water fleas. The small crustaceans, containing the tapeworm larva, are then eaten by any number of different other intermediate hosts, in which the tapeworms undergo further development. Tapeworms are thus transmitted through the food chain — a host animal has to be eaten by the next animal for the life-cycle to continue — until one of these intermediate hosts is eaten by the definitive host, the shark or stingray, in which they reach sexual maturity.”

Tapeworms may hook to the digestive tract of their hosts. However, while feeding essentially on their host animals’ own diets, the parasites don’t frequently “hook up” with one another to reproduce.

“Your dog and cat get certain species of tapeworms from swallowing fleas — fleas can host tapeworm larval stages,” Jensen said.

In addition to assembling a trove of tapeworm knowledge, the project helped to train a generation of cestode specialists. Internationally, 14 postdoctoral fellows, 35 graduate students and 59 undergraduate students participated in the research. 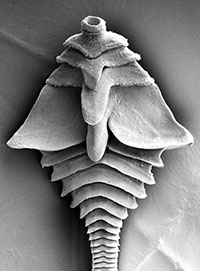 “The training aspect was actually immense, and we are very proud of what came out of this project in terms of training,” said Jensen. “At KU alone, over a dozen undergraduate students worked on this project, along with four master’s students and two doctoral students.”

Images, from top: Scanning electron micrograph of the anterior attachment structure of a species of Paraorygmatobothrium from the Pelagic Thresher Shark from Taiwan.

Top right: Scanning electron micrograph of the anterior attachment structure of a new genus of tapeworm from the Giant Shovelnose Ray from Australia.

Middle right: Scanning electron micrograph of a whole worm representing a new genus of tapeworm from the Ocellate Eagle Ray in the Pacific Ocean.

Bottom right: Scanning electron micrograph of the anterior attachment structure of Litobothrium nickoli from the Pelagic Thresher Shark from Taiwan.

All images courtesy of Kirsten Jensen.