LAWRENCE — Paul Mirecki found himself in the middle of an Indiana Jones-style quest involving looted antiquities. 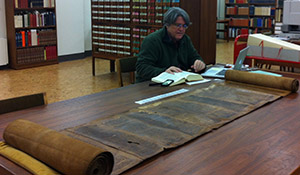 It began with half of a Torah scroll (a handwritten copy of the holiest book in Judaism) dated to about 1750. Mirecki, associate professor of religious studies at the University of Kansas, studied this artifact, which is housed at KU’s Spencer Research Library. Then he wondered what happened to the other half.

“The significance of the scroll is not only its content but the history of the scroll itself. That’s the story,” he said. “It’s like an Agatha Christie mystery.”

The story progressed once Mirecki reached out to the National Library of Israel in Jerusalem, which arranged a collaboration with the archive’s Ephraim Caspi. Two years later, their research led to the Château de Chantilly, a 20,000-acre estate north of Paris, where they believed the first part of the scroll resided.

During spring break in March, Mirecki headed to France to study the item.

“It looks identical to the one we have at KU,” he said, noting both suffered equal damage from water and insects.

“They aged the same way. It’s the same scribe’s handwriting. So all these things match up to where the scroll was torn in half, right down the middle seam. Leviticus 8:24a ends at the bottom of their scroll. And then the top of our scroll begins with Leviticus 8:24b.”

This Leviticus passage (a procedural priestly text regarding Moses and sacrificial animal blood) represents the exact middle of the relic.

“I’ve been able to determine that it was ripped in two, then rolled up equally from both sides,” he said.

But who did the ripping and why they did it developed into the most interesting aspect of the saga.

In 1840, the scroll was intact and residing at a synagogue in the Algerian city of Medea. The Ottoman Empire controlled Algeria at the time. Then France invaded. Meanwhile, a local populace of Muslim extremists launched a pogrom against the Jewish community. Arab religious and military leader Abd-el-Kader intervened in hopes of preventing bloodshed, evacuating members of the Jewish community. But he couldn’t protect their property. As synagogues were looted, the item was taken. (This was likely done by people who didn’t even speak Hebrew and merely hoped to sell it. By ripping it, they had “two scrolls” and could double their profits.)

Enter Henri d’Orléans, the Duke of Au­­male. The son of the last king of France and governor-general during the French invasion of Algeria, the duke lived in Chateau Chantilly.

“I found a quotation from him in his diary,” Mirecki said of the young military commander. “He says in reference to the scroll, ‘I took it with my own hands from Medea’s synagogue in May 1840 when the town had been left to Muslims, and the Jews taken by Abd-el-Kader.’”

The duke brought it back home, where it remains in the vast collection of antiquities he eventually donated to the Institut de France.

KU acquired its half of the scroll thanks to Alpha Owens.

A KU student in the early 1900s, she went on to earn her doctorate from Johns Hopkins University. A woman of wealth, Owens traveled throughout Europe and Latin America “collecting valuable realia material for use in modern language teaching,” according to a 1952 interview. Mirecki thinks she evidently came across the document for sale at a market (or possibly a bookstore) when visiting France, as she had been a student at Sorbonne University. Owens bequeathed it to KU when she died in 1965.

Mirecki notes that the identity of the scroll’s actual creator is a mystery.

He said, “It’s an adult male who comes home from a day of work, has dinner with the family, then goes into a study and does this for four hours. So it’s going to take two to three years, depending on how much time he spends on it every day and every week.”

But the creator’s anonymity also introduces another obstacle.

“It’s difficult to date something like this because scribes tend to write in an old-fashioned style,” he said. “They don’t write the way they write their wife a personal letter; they write in a classic, medieval style, so his handwriting is not easily datable.”

Mirecki has been working on manuscripts his whole career since graduating from Harvard in 1986. The Chicago native is completing his 30th year of teaching at KU, where he specializes in ancient Mediterranean religions and material remains.

“This type of research typically involves going into museums and looking for things in their unstudied inventories that they don’t know they have, and the whole process of cleaning, repairing, translating and then publishing,” he said.

“I just get off on studying ancient documents that were previously unknown.”

Interestingly, this historic piece is “new” to Mirecki.

“I’m usually dealing with ancient Mesopotamia and Egypt,” he said. “This is actually the most modern thing I’ve ever worked on.”