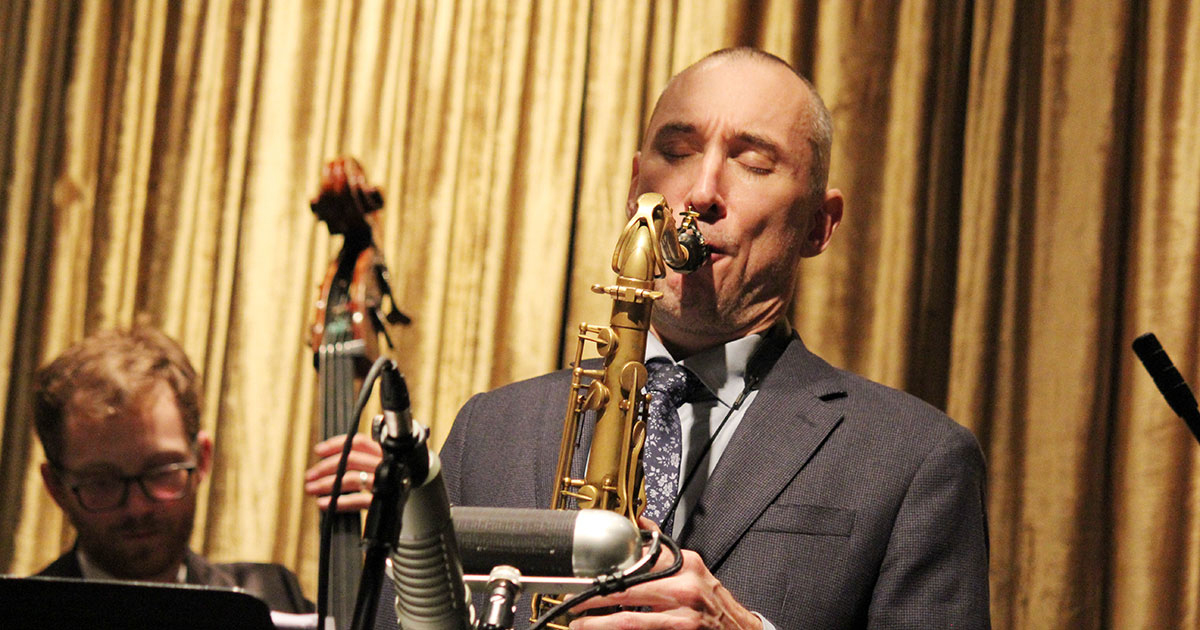 LAWRENCE – Long before he became ensconced as assistant director of jazz studies at the University of Kansas, “since the beginning of the internet,” saxophonist Matt Otto has been online, offering lessons to the masses.

He’d studied at Berklee and The New School, played professionally, including a yearslong stint in Japan, then returned to his native Los Angeles to earn a master’s degree from the California Institute of the Arts.

“My saxophone blog, mattotto.org, was one of the very first lesson blogs online,” he said. “Now there are thousands of them. But when I started, I don't think there were any others.”

The website, which has had nearly 2 million hits over its lifespan, now contains 100 lessons, with titles like “Spread Triads,” “Diatonic 4ths” and “Lydian 5ths.” There are also lessons inspired by Charlie Parker, Dizzy Gillespie, J.S. Bach and Thelonious Monk.

In each lesson, Otto offers a written explanation of the concept and links to a video in which he demonstrates it on the sax. Each lesson has an accompanying, downloadable PDF of a notated exercise to practice the concept.

“It's basically a free educational resource,” he said. “It's been a nice way to just share information with the world and not really expect too much in return.”

Otto sells books that go into greater depth on some of the musical concepts broached in the lessons, and he offers individual lessons via Skype.

“If you're already playing professionally, you probably don’t need the material on the site,” Otto said. “I never had an intention of targeting anyone, but it's basically college-level material. It's honestly just stuff I like practicing. It started out like a classic blog: Here's what I'm working on today; maybe someone will find it interesting.

“I did that for probably a year before there was anyone checking it out at all. It's kind of amazing that after about 10 years, I had upwards of 30 Skype students a week. Before I took the KU job, I had so many Skype students I was basically supplementing my whole life teaching online for a long time. When I got the full-time position, I had to cut all that back.”

Clearly, the good karma Otto put out over the web has come back to him in spades.

He followed his wife to the area when she got a job here (“our house payment is less than the rent on my 600-square-foot apartment in LA,” Otto said), and he quickly earned a place in Kansas City’s storied jazz scene, gigging at top clubs and recording under his own name and with others. He recently recorded a live album with his quartet that is to be released on a label owned by Green Lady and Black Dolphin club owner John Scott later this year.

“If you're 18 years old, to have a resource like me and (Director of Jazz Studies) Dan Gailey and all the great faculty at KU is extremely valuable,” he said. “It's a lot more human and personal than the internet. I mean, the internet is trying to customize itself to you, but the internet doesn't have buildings, it doesn't have concert halls, it doesn't have that human relationship, that mentorship. Learning to inspire a student is really huge.”

Otto said he tries to impart to today’s students the lessons his own mentors instilled in him.

“My main teacher, if nothing else, inspired me to practice with a ton of passion,” Otto said. “And that was what got me able to play as well as I can. His teaching methods were a little more unstructured compared to mine. He just got me believing in myself and wanting to be a musician — seeing the value in it culturally, that it's an important art form and that it contributes in a healthy way to humanity.”

One might even call it one of the eternal verities.

“I think the deepest and most meaningful things are the ones not dependent on a given epoch,” Otto said. “Things that exist outside of technological development, or the Industrial Revolution — you know, relationships with people, eating food — all this stuff is more important and more fundamental, and artists are a part of that. Drawing, painting, writing, speaking, making music, these are ancient things, so they will be around regardless of what epoch we live in.”