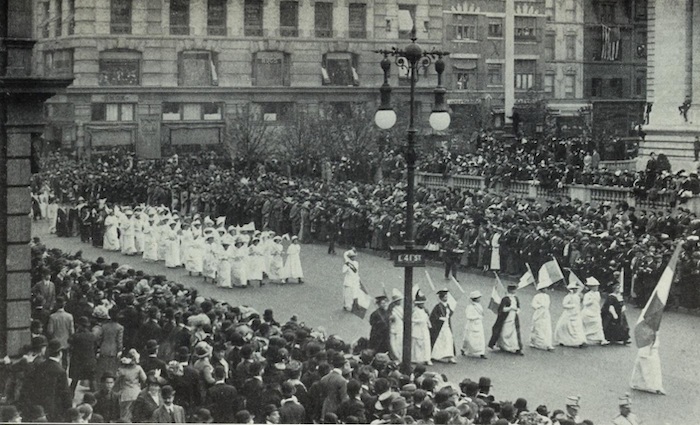 LAWRENCE — A little more than a century ago, women were being beaten, jailed and staging hunger strikes to secure the right for themselves and other women to vote. If those struggles have disappeared from the public consciousness, seven months of events at the University of Kansas will bring them back into the conversation.

The Centennial Celebration of the 19th Amendment kicks off at KU with the Suffrage Anniversary Launch Event at 7 p.m. Sept. 24 at the Dole Institute of Politics. The free event will feature suffrage historians Jinx Broussard, Teri Finneman and Candi Carter Olson discussing the history of the suffrage movement and voting issues that remain today. The event will set the stage for a year of discussions related to the 100th anniversary of the 19th Amendment.

“I think that women in general don’t have the historical context of what so many people were doing to give us the basic rights we have today,” said Finneman, assistant professor of journalism and lead organizer of KU’s celebration. “It’s really important to show how these women went on hunger strikes, were beaten and worked for seven decades so that we have this basic say in our country.”

Finneman is a journalism historian, expert in press coverage of women politicians and the author of “Press Portrayals of Women Politicians, 1870s-2000s.” She said the centennial celebration events running from September through April 2020 will bring in perspectives that were often overlooked in the suffrage movement, including specific discussions of issues affecting Native and African American women.

“One hundred years ago, the suffrage movement was not as inclusive as it should have been,” Finneman said. “We should do better to make sure our events have different voices at the table, and we want to hear from a variety of ages, races and countries. Men can’t be left out either. We hope men will come out to these as well to be supportive of their daughters, sisters, significant others and mothers.”

A listing of events is available online.

“I think it’s really important as a college campus to take an active role in the anniversary,” Finneman said. “Campuses are supposed to be a place of free expression, learning and sharing ideas together. I’m hopeful that by discussing this history of the struggle for rights today, we will pull campus and Lawrence together to have these important conversations.”

The celebration is a collaborative effort including the Dole Institute, Emily Taylor Center for Women & Gender Equity, Hall Center for the Humanities, KU Libraries, School of Journalism, Watkins Museum of History, the Kress Foundation Department of Art History and the departments of Communication Studies, English, Political Science and Theatre & Dance.