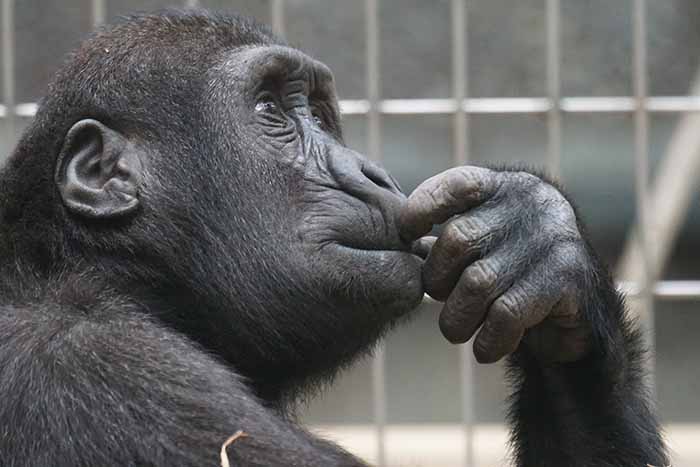 LAWRENCE — A gorilla putting a stick in a termite mound to get a meal, a house cat learning how to open a door and a pensioner inventing a product for safe walking that goes on to earn millions in sales may not seem similar on the surface, but they all come from a similar place: an innate need to solve a problem. A University of Kansas professor has co-written a new study providing a framework to compare nonhuman animal innovation to how humans innovate and the underlying similarities between the two.

Much has been written about how animals innovate to solve their problems, and entire fields of study are devoted to human innovation. Yet, there has been little comparison between the two. Animals, like humans, engage in user innovation, or the process of solving a problem not with the goals of passing the solution on to others or making money, the study argues, though humans have advanced beyond that sole type of innovation.

Andrew W. Torrance, Paul E. Wilson Distinguished Professor of Law at KU, has co-written a study with Lydia Hopper of the Lester E. Fisher Center for the Study and Conservation of Apes at Lincoln Park Zoo in Chicago, comparing human and nonhuman animal innovation. Published in the journal Animal Cognition, the study aims to reframe how animal innovation is considered and to provide easier comparison between the two forms while opening new avenues for research and experimentation.

Hopper, a leading primatologist, and Torrance, a legal scholar with a doctorate in biology, illustrate the two forms of human innovation: user and producer. The majority of innovations fall in the former category, in which someone solves a problem by coming up with a new invention, modifying an existing one or figuring out a new way of addressing an issue. In the majority of cases, once the problem is solved it ends there, with no consideration of marketing or mass producing the innovation. In the case of producer innovation, a solution to a problem is produced on a mass scale, often by commercial or academic laboratories, and distributed on a mass basis both to address common problems and make profits for the innovator.

There are countless examples of nonhuman animals innovating to solve problems, Torrance said, but based on what is known to science thus far, none of it falls into the category of producer innovation. Notably, when animals other than humans innovate, they very rarely communicate their innovation to others, and have not been found to mass produce such solutions. Therefore, they engage in user innovation, the same method of problem solving probably engaged in by the first humans.

“Between the two of us, we were able to come up with a new idea, or framework, that hadn’t been suggested, but once we began thinking about it, it seemed obvious,” Torrance said of his work with Hopper. “Nonhuman animals are innovating all the time, be they chimpanzees learning how to lure termites out of their mounds, Caledonian crows navigating complicated puzzles, or the family dog figuring out how to open the kitchen garbage bin to reach the delicacies inside. We looked at what form of innovation they use. It’s pretty obvious animals other than humans don’t engage in producer innovation; we found no evidence of factories run by creatures great or small. And, nonhuman animals generally don’t communicate their innovations to others. That’s where it ends. Humans, by contrast, engage in both user and producer innovation.”

Humans almost certainly began with user innovation and evolved to develop producer innovation as the needs of society and division of labor made it both necessary and feasible to do so, Torrance said. Yet both types still exist in humans, and user innovation is in fact still an important, even dominant, form in some areas of human activity. The study shares examples of various types of user innovation in which people solve their own needs or groups of people come together to form new solutions or improve existing innovations, whether they were born of user or producer innovation.

Torrance shared the example of parents who have children with Type I diabetes. It can be difficult for a child with the condition to monitor her own blood glucose closely, despite the necessity of doing so. A father named Lane Desborough hacked an existing blood glucose monitor to make it possible for him to monitor his son’s glucose levels remotely. He did so neither for profit nor for others, but simply to solve the problem of keeping his son safe. With a solution in hand, in many similar cases, the innovators stop because their problem has been solved. In the case of Desborough, he generously posted his design on the web for any other person in need to use freely. Sometimes user innovators even give their innovations away for free to companies that can themselves mass produce, market and profit from them.

“Usually solutions to a problem like that arise from a parent or person who is frustrated. So, by themselves, or with others, they come up with a solution and stop there,” Torrance said. “The market plays little role, and there’s no production or profit.”

Humans are an exceptionally innovative species, but not alone in the fact that they can be creative problem solvers.

“We are exceptional by engaging in producer innovation, not simply in the sense that we innovate per se,” Torrance said.

With such a framework and comparison, scholars can take a new understanding to animal behavior and develop a new way of conducting experimental and observational research, the authors argue. Torrance is a scholar who specializes in innovation, intellectual property, biolaw and biodiversity and is currently leading intellectual property for the Eli and Edythe Broad Institute of MIT and Harvard. He said working with Hopper, a renowned primate expert, was exciting in combining insights from seemingly disparate fields to open new avenues of understanding. And while producer innovation has not been observed in animals other than humans, the new framework could help shed light on the question of why it may or may not occur.

“I wouldn’t be surprised if we could find some kind of simple analog of producer innovation in nonhuman animals, perhaps in social insects like ants, termites, bees or wasps that exhibit distinct divisions of labor,” Torrance said. “Rather than factories in the human sense, we might discover simple production lines. The theoretical framework that Lydia and I have proposed might help explain why.”