LAWRENCE — A University of Kansas School of Engineering professor will be appointed by the president of the United States to serve on a national science and technology advisory board.

Shannon Blunt, professor of electrical engineering and computer science, will be named to the President’s Council of Advisors on Science and Technology (PCAST) by President Donald Trump, the White House announced. 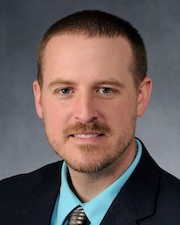 PCAST is a presidential-level advisory council of science and technology leaders from the private sector and academia who provide advice about science, technology and innovation on topics critical to national security, the economy and health.

“I am deeply honored by the opportunity to serve this country in the furtherance of science and technology, and I am ready to get to work,” Blunt said.

PCAST will include 16 members in addition to the chair of the council. The inaugural meeting will take place Nov. 18.

“Professor Blunt is a globally renowned researcher whose work benefits society in meaningful ways, and he is a terrific choice for this important advisory position,” said Arvin Agah, dean of the KU School of Engineering. “Professor Blunt’s appointment to this council serves to further elevate the research profile at the University of Kansas and the School of Engineering, and is a reminder that KU is home to some of the world’s top scholars. We are proud of Professor Blunt and look forward to his contributions to this council and the nation.”

In addition to his role as a professor, Blunt serves as director of the university’s Kansas Applied Research Lab and the Radar Systems Lab. He is recognized internationally for his expertise in radar and remote sensing, with specific research interests including adaptive signal processing for radar and communications, array processing, interference cancellation, waveform diversity and design for physical systems, and spectrum engineering.

Blunt is chair of the Radar Systems Panel of the Institute of Electrical and Electronic Engineers (IEEE) and serves on the Board of Governors for the IEEE Aerospace and Electronics Society. Previously, Blunt spent three years in the Radar Division of the Naval Research laboratory in Washington, D.C. Blunt has made major contributions to radar technology via his publication of more than 150 articles and 11 book chapters, two books, his 16 patents/patents-pending, and his receipt of the Fred Nathanson Memorial Radar Award and IEEE Fellowship for contributions to radar waveform diversity and design. Read his full biography.

According to the White House press release, PCAST is a presidential-level advisory council of the nation’s science and technology leaders from the private sector and academic communities who will provide advice about science, technology and innovation on topics critical to the nation’s security and economy, and the health and welfare of the American people. Among other areas, the council will provide policy recommendations on strengthening U.S. leadership in science and technology, building the workforce of the future, and supporting foundational research and development across the country.

PCAST was launched by executive order in 2001, formalizing a process that had been in place through many previous administrations to advise the President on matters involving science, technology, education and innovation policy. The council provides the President with scientific and technical information to inform public policy relating to the U.S. economy, the U.S. worker, national and homeland security and other topics. The council includes distinguished individuals from sectors outside the federal government and represents diverse perspectives and expertise in science, technology, education and innovation.

According to the White House announcement, the council will be chaired by Kelvin K. Droegemeier, director of the Office of Science and Technology Policy, and appointed members of the council will now include: