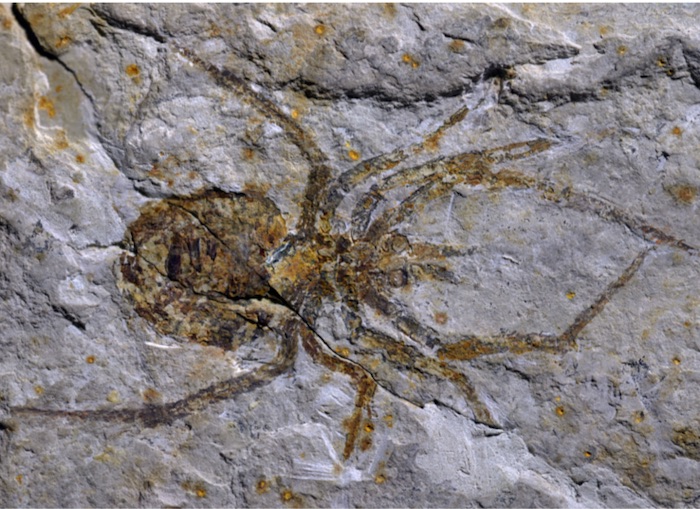 LAWRENCE – Earlier this year, a remarkable new fossil specimen was unearthed in the Lower Cretaceous Yixian Formation of China by area fossil hunters – possibly a huge ancient spider species, as yet unknown to science.

The locals sold the fossil to scientists at the Dalian Natural History Museum in Liaoning, China, who published a description of the fossil species in Acta Geologica Sinica, the peer-reviewed journal of the Geological Society of China. The Chinese team gave the spider the scientific name Mongolarachne chaoyangensis. 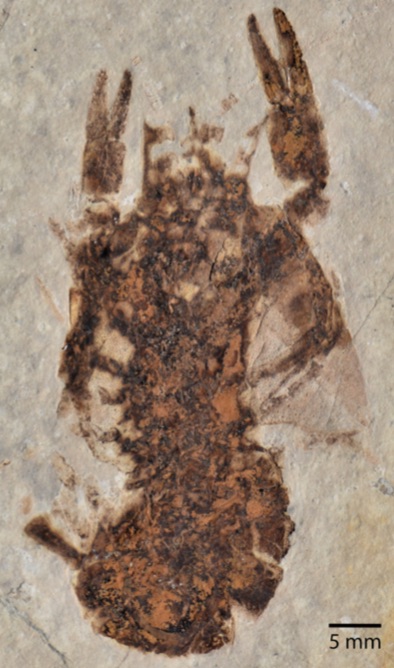 But other scientists in Beijing, upon seeing the paper, had suspicions. The spider fossil was huge and strange looking. Concerned, they contacted a U.S. colleague who specializes in ancient spider fossils: Paul Selden, distinguished professor of invertebrate paleontology in the Department of Geology at the University of Kansas.

“I was obviously very skeptical,” Selden said. “The paper had very few details, so my colleagues in Beijing borrowed the specimen from the people in the Southern University, and I got to look at it. Immediately, I realized there was something wrong with it – it clearly wasn’t a spider. It was missing various parts, had too many segments in its six legs, and huge eyes. I puzzled and puzzled over it until my colleague in Beijing, Chungkun Shih, said, ‘Well, you know, there’s quite a lot of crayfish in this particular locality. Maybe it’s one of those.’ So, I realized what happened was I got a very badly preserved crayfish onto which someone had painted on some legs.”

Selden and his colleagues at KU and in China (including the lead author of the paper originally describing the fossil) recently published an account of their detective work in the peer-reviewed journal Palaeoentomolgy.

“These things are dug up by local farmers mostly, and they see what money they can get for them,” Selden said. “They obviously picked up this thing and thought, ‘Well, you know, it looks a bit like a spider.’ And so, they thought they’d paint on some legs – but it’s done rather skillfully. So, at first glance, or from a distance, it looks pretty good. It’s not till you get down to the microscope and look in detail that you realize they’re clearly things wrong with it. And, of course, the people who described it are perfectly good paleontologists – they’re just not experts on spiders. So, they were taken in.”

In possession of the original fossil specimen at KU, Selden teamed up with his graduate student Matt Downen and with Alison Olcott, associate professor of geology. The team used fluorescence microscopy to analyze the supposed spider and differentiate what parts of the specimen were fossilized organism, and which parts were potentially doctored. 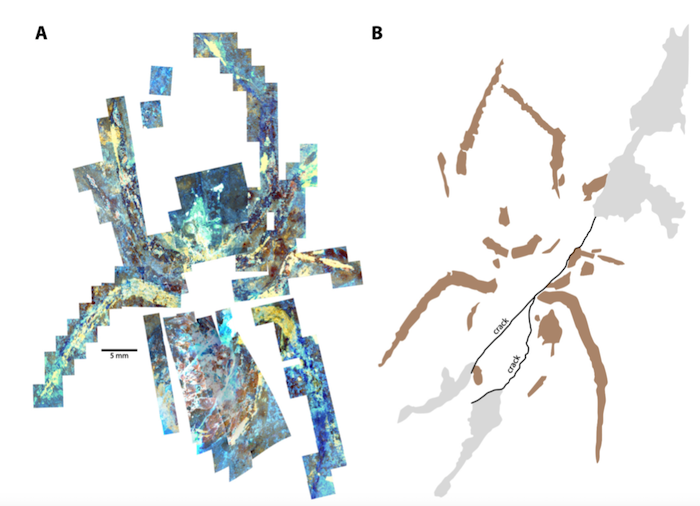 “Fluorescence microscopy is a nice way of distinguishing what’s painted on from what’s real,” Selden said. “So, we put it under the fluorescence microscope and, of course, being a huge specimen it’s far too big for the microscope. We had to do it in bits. But we were able to show the bits that were painted and distinguish those from the rock and from the actual, real fossil.”

The team’s application of fluorescence microscopy on the fossil specimen showed four distinct responses: regions that appear bright white, bright blue, bright yellow, and ones that are dull red. According to the paper, the bright white areas are probably a mended crack. The bright blue is likely from mineral composition of the host rock. The yellow fluorescence could indicate an aliphatic carbon from oil-based paint used to alter the crayfish fossil. Finally, the red fluorescence probably indicates the remnants of the original crayfish exoskeleton.

“We produced this little paper showing how people could be very good at faking what was clearly a rather poor fossil – it wasn’t going to bring in a lot of money – and turning it into something which somebody bought for quite a lot of money, I imagine, but it clearly was a fake,” the KU researcher said. 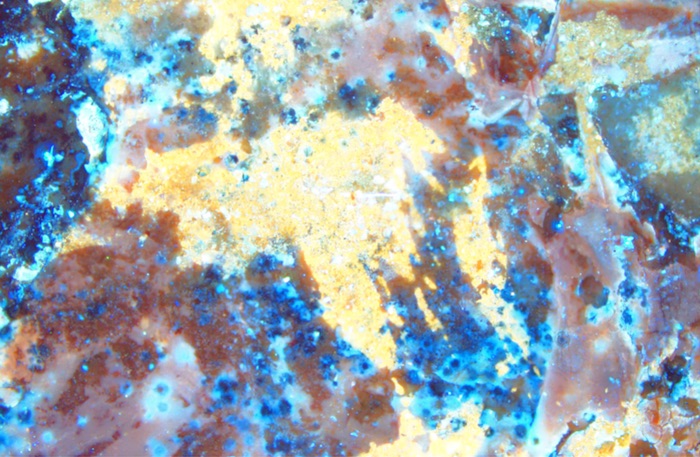 Selden said in the world of fossils fakery is commonplace, as impoverished fossil hunters are apt to doctor fossils for monetary gain.

What’s less common, he said, was a fake fossil spider, or a forgery making its way into an academic journal. However, he acknowledged the difficulty of verifying a fossil and admitted he’d been fooled in the past.

“I mean, I’ve seen lots of forgeries, and in fact I’ve even been taken in by fossils in a very dark room in Brazil,” he said. “It looked interesting until you get to in the daylight the next day realize it’s been it’s been enhanced, let’s say, for sale. I have not seen it with Chinese invertebrates before. It’s very common with, you know, really expensive dinosaurs and that sort of stuff. Maybe they get two fossils and join them together, this kind of thing. Normally, there’s not enough to gain from that kind of trouble with an invertebrate.

"But somebody obviously thought it wasn’t such a big deal to stick a few legs onto this, because a giant spider looks very nice. I’m not sure the people who sell them necessarily think they’re trying to dupe scientists. You tend to come across these things framed – they look very pretty. They’re not necessarily going to be bought by scientists, but by tourists.”

Selden didn’t know the eventual fate of the enhanced spider fossil, which he likened to the famed “jackalope.”

He said he thought it would go back to China where it could be put on display as a cautionary tale. One thing is for certain: it will be stripped of the scientific name Mongolarachne chaoyangensis and rechristened as a crayfish. Because of the fossil’s alterations and state of preservation, Selden said it was hard to pin down its exact species. The team tentatively placed the fossil in Cricoidoscelosus aethus, “because this is marginally the commoner of the two crayfish recorded from the Yixian Formation.”