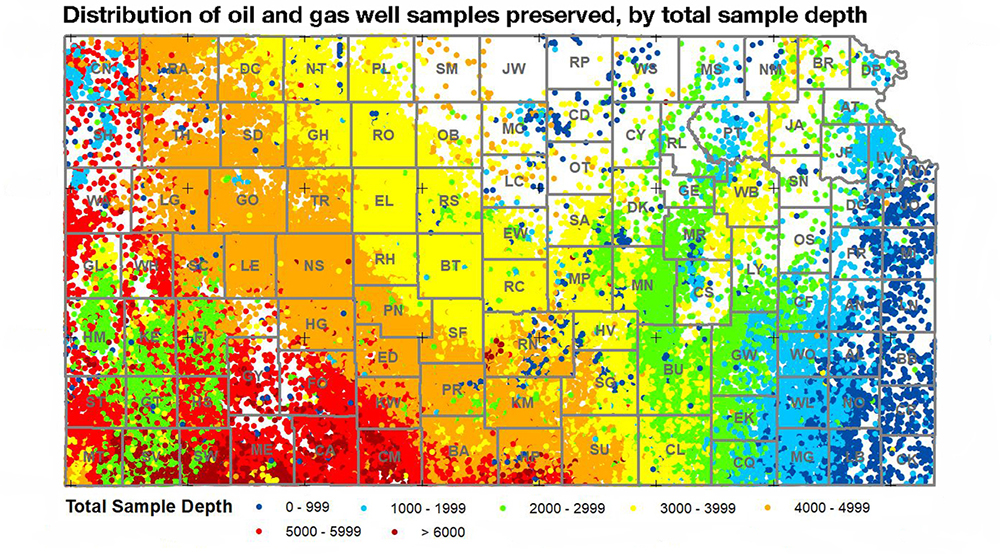 LAWRENCE — Rock cuttings recovered from boreholes and wells drilled as deep as 6,000 feet beneath the surface are preserved in Wichita at the recently expanded and renamed Kansas Geologic Sample Repository, Kansas Geological Survey, University of Kansas. The KGS’s main office is in KU’s West District in Lawrence.

Previously known as the KGS-Wichita Well Sample Library, the repository has a new 6,000-square-foot addition for its growing collection of cuttings from Kansas, submitted mainly by companies exploring for oil and gas. Cuttings are small pieces chipped off subsurface rock layers by an advancing rotating drill bit and then flushed to the surface.

“Rock cuttings are a valuable source of geologic information about what lies beneath us,” said Mike Dealy, manager of the Kansas Geologic Sample Repository. “A skillful geologist or petroleum engineer can use cuttings to determine rock type, the specific formation encountered, formation depths and hydrocarbon content.”

Hydrocarbons — compounds of hydrogen and carbon — are the chief component of crude oil and natural gas. Texture, fossil content, mineral composition and porosity — the percentage of open space within a rock formation — are among the characteristics in cuttings that help determine if a rock formation contains hydrocarbons. Cuttings also provide important clues for geologists to an area’s environment hundreds of millions of years ago.

Most oil-producing rocks in Kansas formed 500 million to 252 million years ago. Shallow, intermittent seas covered much of the state during that time span, and carbon-rich sediment formed from shell debris and other sources that settled on sea floors eventually was buried and compressed into layers of rock.

Although the youngest of those layers are at or near the surface in eastern Kansas, oil-producing rocks are about 3,000 to 6,000 feet underground in the large swath of western and central Kansas that encompasses the state’s top-10 oil-producing and gas-producing counties.

While the Kansas Corporation Commission regulates the preservation of rock samples and records from oil and gas drilling, the KGS can request that any sample deemed significant be preserved and conserved at the sample repository.

From 2007 through 2019, staff processed 24 million sample feet — or 4,545 miles — of rock from about 18,400 Kansas oil and gas wells. Production of drilling and preservation during those years peaked in 2013 as a wave of horizontal drilling crested in south-central Kansas.

Used mainly by companies exploring for oil and gas and scientists studying the subsurface environment, the cuttings can be viewed at KGS-Wichita or checked out for an extended period. A database of the collection is available online.

In addition to preserving sample cuttings, the KGS is the state repository for 67,000 boxes of core from more than 5,000 drill holes. Stored in Lawrence, the cylindrical drill cores — 2 to 4 inches in diameter and often hundreds of feet long — are brought up in intact segments, as opposed to chopped pieces. Although cores provide a more complete picture of the subsurface environment than cuttings, coring is more expensive and less often done.

The KGS also archives drilling records and other documents for more than 450,000 oil and gas wells and 273,000 water wells at its headquarters in Lawrence.

The Kansas Geological Survey is a research and service division of KU. KGS researchers study and provide information on the state's geologic resources and hazards, including groundwater, oil and natural gas, rocks and minerals, and earthquakes.