LAWRENCE — When Michael Davis was a professor at the University of Kansas School of Law in 1971, he made a big impression on law student Christopher “Kit” Smith — so big that Smith and his wife, Diana, have pledged $1 million to create a fund at KU Law in Davis’ name. 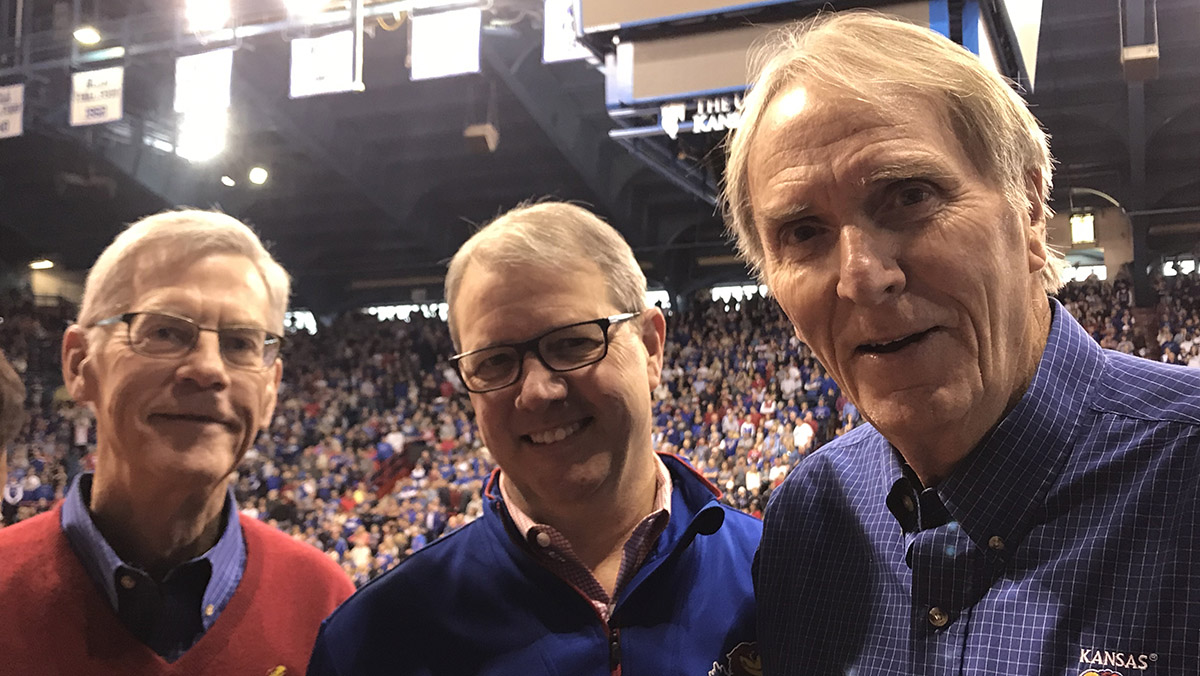 “When I was in law school at KU, I had the advantage of an incredibly strong faculty,” Smith said. “The professors’ offices in old Green Hall were small, but the doors were always open. And if you went in, you got personal attention.” That special support allowed him to launch a career in Washington, D.C.

Smith lives in Evergreen, Colorado. He grew up in Fairway and attended Shawnee Mission North High School. He earned his undergraduate degree at Wabash College in Indiana before entering KU Law School. After graduation in 1972, Smith joined the law firm Arent Fox in Washington, D.C. Twenty-five years later, he was elected managing partner of the firm. Smith then moved in 2003 to Dentons, the largest law firm in the world, where he continues his 48-year legal career as a senior partner.

Davis, a native of Clay Center, lives in Lake Quivira. He received his undergraduate degree from Kansas State University and his law degree from Michigan. Davis joined the KU Law faculty in 1971. In 1974 he was named the first general counsel of the university, a position he kept until he was appointed dean of the law school in 1980.

During his nine years as dean, Davis recruited key faculty members, raised the entering class profile and chaired the Committee of (Lawrence campus) Deans. His fundraising efforts quadrupled the prior annual giving total, increased the number of distinguished professorships from one to five, and led a successful capital campaign of which Smith was a key committee member. As dean, Davis spent a great deal of his time “out of the building,” traveling across Kansas and the country representing KU Law.

During these travels, Davis, at the request of the chancellor, often represented the entire Lawrence campus and helped raise the profile of KU Law for alumni, law firm recruiters and potential new students. It was during these “missions” that Davis and Smith became a strong team for the growing number of KU grads interested in law firm, government or corporate jobs in the greater Washington, D.C., area.

Smith was the hometown coordinator of these efforts that paid off with dozens of KU placements in this fertile source of entrance and advancement. Similar efforts were successful in cities from Chicago to Los Angeles, again broadening KU Law graduate opportunities and alumni interest. Smith was Davis’ national role model for these endeavors as well as the creator of area alumni address and phone lists before computer data bases became available.

Davis remained on the faculty for 26 years after leaving the deanship. In addition to his teaching and writing responsibilities, he worked on two more capital campaigns and, in 2005-06, served as interim dean. He was a “go-to” accreditation leader for the American Bar Association, serving on, and usually chairing, more than 30 visits to American law schools and their foreign-based programs. He chaired both the ABA Accreditation and Standards committees, and he finished his career as a six-year member of the Council on Legal Education and Admissions to the Bar, the highest regulatory body for American legal education.

Stephen Mazza, dean of KU Law, expressed his gratitude for the gift and recognized the influence Davis had on KU Law.

“Mike recruited some of KU Law's most recognized scholars who helped build a reputation for the school that we continue to protect and nurture,” Mazza said. “Kit’s gift also recognizes the important role Mike played in building the school's fundraising efforts and his level of engagement with the alumni base over the years. Mike was instrumental in explaining to the alumni base about the importance of private support at a time when many law schools did not see the need for an active fundraising effort. In that sense, Mike put KU Law ahead of the game.”

Former KU Chancellor Gene Budig reflected on his friendship and collaboration with Davis during their time at the university.

“Mike was dean of law when I first came to the campus, and over the next eight years we worked closely together. He was a highly effective leader for the school, which grew in both reputation and assets during his tenure. At my request he often spoke for the Lawrence campus at alumni occasions throughout the nation,” Budig said. “His work for the St. Lawrence Campus Center, Coach Roy Williams, the American Bar Association and the Douglas County Community Foundation further engrained him as a highly valuable faculty member and leader. Mike and I remain good friends, and I am pleased to learn that this generous gift will keep his name alive for further generations of KU students, faculty and alumni.”

Smith said, “My gift to the law school is a small way of trying to give back, particularly to those who trained me when I didn’t know the first thing about law, and who left a lifetime impression on me.”