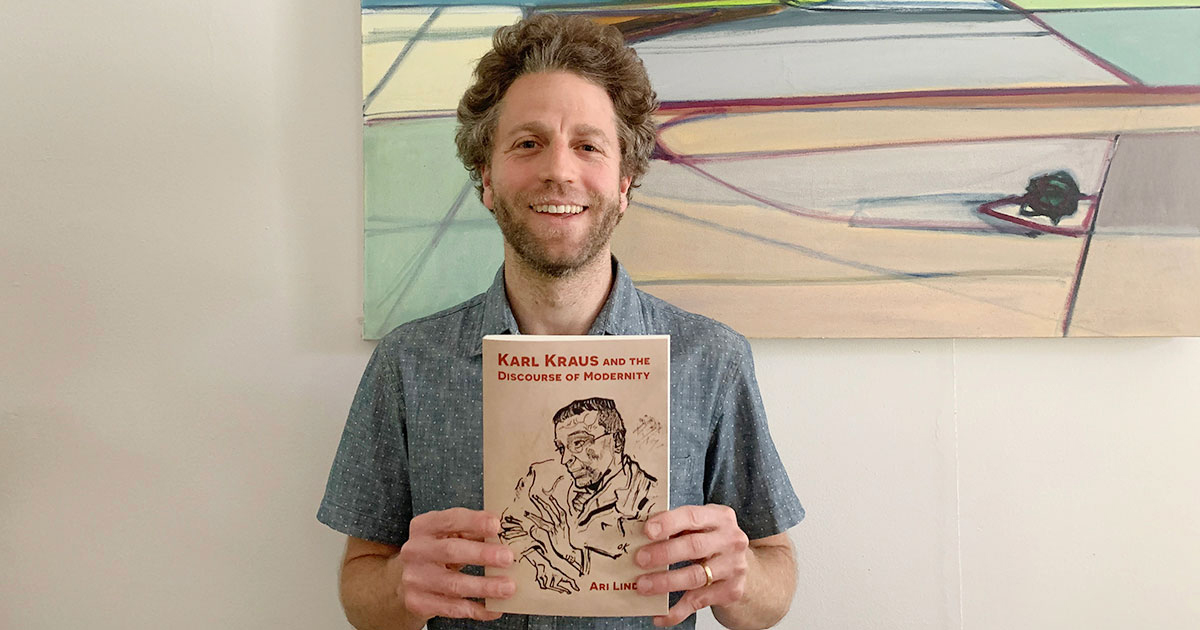 LAWRENCE – More than a century ago, before the Great War and long before Hitler’s rise to power, Austrian writer and satirist Karl Kraus (1874-1936) was calling out the danger that “fake news” could drag a nation into unnecessary military conflict and ruin.

In that sense, he was one of the first media critics, forming his own magazine, The Torch (Die Fackel), mainly to criticize the dominant and later belligerent narratives pushed by his nation’s leading news outlets.

It was just one of the prophecies from Kraus that came to pass and that are reviewed in-depth in a new monograph titled “Karl Kraus and the Discourse of Modernity” (Northwestern University Press)  by Ari Linden, University of Kansas associate professor of German studies.

Linden writes that Kraus’s media criticism should be considered a significant contribution to the theorization of “European modernity and, more specifically, of its self-destructive tendencies” during the first half of the 20th century. The book reappraises some of the Kraus’ most important literary works, and it compares Kraus favorably to such better-known European thinkers as Soren Kierkegaard, Walter Benjamin and Theodor Adorno.

Kraus combined the incisiveness of a journalist with the wit of a comedian and the cut-and-paste literary techniques popularized in the mid-20th century by the Beat writers.

“He’s like a combination of Stephen Colbert, William S. Burroughs and Marshall McLuhan — but doing this a century ago,” Linden said recently. “I think that's part of what makes him both relevant and resonant today. His techniques would be recognizable.”

And yet, in part because his use of language is so dense and filled with historical allusions, Linden said, Kraus has been overlooked. The book is Linden’s attempt to set the record straight.

“Kraus is a major figure in the German-speaking world that very few people have actually read,” Linden said. “Everyone knows about him. Everyone can quote something from him. But relatively little scholarship on him has been published in English over the last several decades.”

Kraus was born into a wealthy Jewish family in what was then the Austro-Hungarian Empire. But in his writings, his sympathies were directed toward the working classes.

Linden writes in the book that Kraus’ “bête noire throughout his life was the daily press, and what Kraus considered to be its deleterious effects on the imagination of the modern reader and thus on modern political life. ‘How is the world ruled and led to war?’ Kraus once wrote. ‘Diplomats lie to journalists and believe these lies when they see them in print.’ Here, Kraus addresses not only the feedback loop informing the relationship between the press and the state, but the facility with which mendacity ... is taken for truth. Mendacity, for Kraus, takes on many different forms in the context of journalistic discourse.”

Linden writes that because “Kraus’ critiques of the press are inextricable from larger discourses concerning the predicaments of modernity ... this book, broadly stated, is interested in the question of how illiberal forces, regimes and ways of thinking develop within ... a liberal framework. Kraus is concerned, I argue, with the conditions of lived experience that permit undesired wars to be waged, democracies to flounder, and political extremism to take root.”

Kraus not only criticized the forces that led to the first World War but also those that would lead to the second. As a Jew, his disdain for Hitler was understandable, if prescient.

“He's hard to place on a political spectrum,” Linden said. “I like to think of Kraus as a truly radical thinker, but his positions changed throughout his life. From being a monarchist in his early days, he later welcomed the monarchy’s demise after it had plunged Europe into the First World War. He developed strong sympathies with the communists but never officially aligned himself with the party, which he thought was incapable of perceiving the true threat of Nazism. Until 1932, he reserved most of his venom, however, for the bourgeoisie and the centrist commentariat.

“He perceived what was going on very, very early. He already started mentioning Hitler and the swastika in the early ’20s. He was concerned about alliances that were being formed between the clergy and the nostalgic aristocrats that wanted the monarchy to be restored and this newer brand of far-right extremism embodied in what eventually became National Socialism. Kraus foresaw how these forces were finding their way into the mainstream.”

This dynamic and its relevance to today are why, Linden said, there is something of a Kraus revival going on among scholars and writers like the novelist Jonathan Franzen and why Linden is pleased to be a part of it.