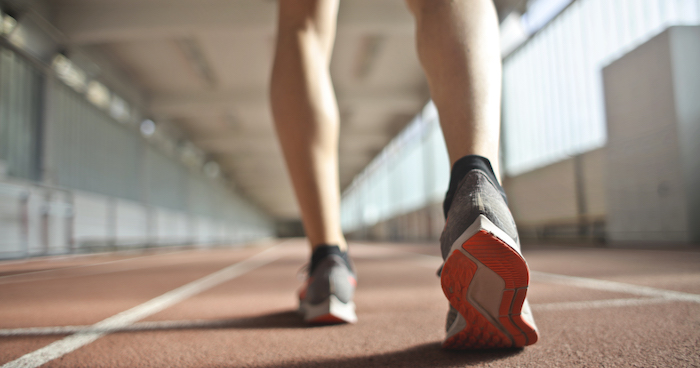 Yet the last of these supposed workout benefits — weight loss — is problematic for people living with an eating disorder such as anorexia nervosa or bulimia nervosa. Both eating disorders are marked by distorted negative perceptions of one’s body and often a compulsive desire to lose weight.

“Excessive exercise is a behavior people with eating disorders can engage in without anybody really noticing that they’re doing something that could be harmful,” said Danielle Chapa, a doctoral student at the Center for the Advancement of Research on Eating Behaviors in the University of Kansas Department of Psychology. “With excessive-exercise behavior, people may be exercising with extreme intensity, for two or more hours, or when they have a fever or when they’re injured. Exercise can be a compulsive behavior — something they have to do. It’s problematic because it could make recovery from an eating disorder a much longer process. There’s also a lot of medical complications that go along with excessive exercise — for instance, increased susceptibility to injury.”

Now, with an $84,940 award from the National Institute of Mental Health, Chapa will investigate the causes and effects of excessive exercise on study participants who are experiencing eating disorders. The investigation, called the FuEL Study (Function of Unhealthy Exercise in Everyday Life), represents Chapa’s doctoral thesis. She hopes it also will expand the tools available to clinicians to help diagnose and treat eating disorders when lives hang in the balance — 20,000 people die each year from eating disorders due to medical complications or suicide.

Chapa now is recruiting 80 participants at fuelstudy@ku.edu. She hopes to better understand the emotional function of excessive exercise in those living with eating disorders, as well as “moment-to-moment predictors” of unhealthy exercise. People in the study will be prompted via smartphone to track their emotional state for seven days.

For a week, each participant in Chapa’s study will receive random surveys via a mobile-phone app every few hours.

“We want to see what their mood is at each of those surveys,” she said. “With enough surveys throughout the day, we can see how affect changes.”

To track exercise, the same participants will wear a research-grade activity monitor for the duration of their participation, allowing Chapa to detect relationships between participants’ emotional states and the timing and intensity of their exercise.

“The Actigraph will collect things like number of steps that a person takes, how long a person is physically active and the level of intensity of their physical activity — if it’s moderate or vigorous,” she said. “We’ll also use that data to identify when exercise occurred in the day, because you get an exact time of exercise. We can then combine the Actigraph data with information we get from the surveys.”

At the end of each day, participants will log information about overall health and injuries.

Chapa, who works with people experiencing eating disorders in a clinical setting as part of her KU doctoral work, said she hoped her study would produce data that someday could underpin effective interventions for excessive exercise as a follow up to her project.

Photo by Andrea Piacquadio from Pexels