LAWRENCE — The Kansas Geological Survey (KGS) at the University of Kansas has been awarded $1.5 million for a two-year project to study the feasibility of recovering minerals critical to advanced and defense manufacturing as well as the clean energy industry from coal deposits, associated rock layers and legacy mining wastes found in Kansas and neighboring states. Critical minerals are defined as raw materials that are vital for the economic or national security and come predominantly from foreign sources that are prone to disruption. 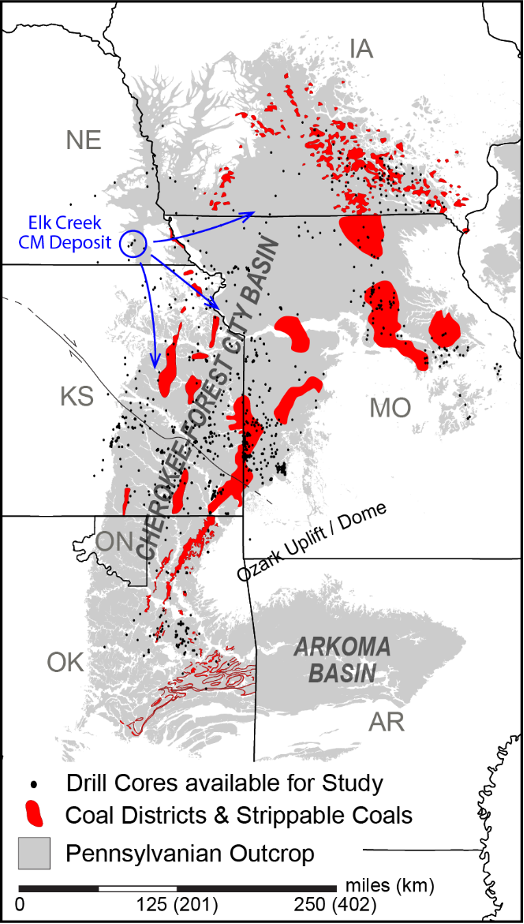 The grant is one of 13 funded by the U.S. Department of Energy across the country to support the production of rare earth elements (REE) and critical minerals used to produce magnets in wind turbines, advanced batteries in electric and conventional vehicles, and other components important to advanced and defense manufacturing as well as clean energy technology.

The project supports the DOE’s goal of expanding and transforming coal from a resource that is burned into a source for critical minerals, rare earth elements and other carbon-based products that are in short global supply.

“This project has the potential not only to spark new mining activity across a broad swath of the U.S. Midwest but also to identify sources of vital raw materials to support advanced, defense and clean energy manufacturing, as well as to provide funding to remediate legacy mining wastes,” said Franek Hasiuk, project joint primary investigator and geologist with KGS.

KGS and its collaborators in the project — the state geological surveys of Iowa, Oklahoma, Missouri and Nebraska and the Osage Nation Minerals Council — will study the potential of recovering minerals from an area known as the Cherokee-Forest City basin, which stretches from northeast Oklahoma through the Osage Nation, eastern Kansas, northwest Missouri, and southeast Nebraska into southwest Iowa.

Kansas and its neighbors have a long history of producing coal and other rocks and minerals of economic value. Coal was mined in northeastern Kansas as early as 1827. In the late 1800s, mines in Osage, Bourbon, Cherokee and Crawford counties supplied fuel for railroads. In addition to coal, the era saw thriving zinc and lead mines in far southeastern Kansas. The Tri-State mining district, which includes the southeast tip of Kansas and parts of Oklahoma and Missouri, was once one of the major zinc and lead mining areas in the world.

Though the last coal mining company in Kansas, at least for now, ceased operations in 2016, remaining coal deposits and associated strata — nearby layers of rocks — might contain valuable critical minerals.

“There’s a world-class deposit of niobium, scandium, titanium and rare-earth elements in our area of investigation within southeast Nebraska. One hypothesis we’re testing is whether these minerals weathered into the basin during intervals of coal formation, therein increasing the mineral content of these coals,” said Stephan Oborny, project joint primary investigator and KGS assistant research professor.

The KGS-led project will analyze available information — including drill cores from coal-bearing rocks housed at each of the state geological surveys involved in the study — to model and calculate the concentration and distribution of critical minerals across the basin. The team also will pilot the use of a new methodology that has the potential to revolutionize and expedite exploration for and modeling of critical mineral distribution in the future. The innovative technology can measure the chemistry of rocks through well logging, or lowering sensors down oil and water wells.

“Being able to identify critical minerals via well logging can unlock data that has already been collected from thousands of other wells,” said Ibukun Bode-Omoleye, project co-primary investigator and KGS assistant scientist.

In addition to studying coals and associated rock layers, the team will identify waste piles and tailings from past mining operations as well as from coal-fired power plants, electronic recycling facilities and other industrial recyclers and will assess whether these sources could be recycled for critical mineral production.

The team envisions establishing a technology innovation center, dubbed “CritiMinTic,” to be located in KU’s Innovation Park to serve as a center for teaching industry how to identify and produce these deposits in an environmentally friendly manner.

An advisory committee includes representatives of the coal, aggregate and REE industries as well as retired academics with expert knowledge of the historical mining operations and stratigraphy of the Cherokee-Forest City basin.

The Kansas Geological Survey is a nonregulatory research and service division of KU. KGS researchers study and provide information about the state's geologic resources and hazards, including groundwater, oil and natural gas, rocks and minerals, and earthquakes.