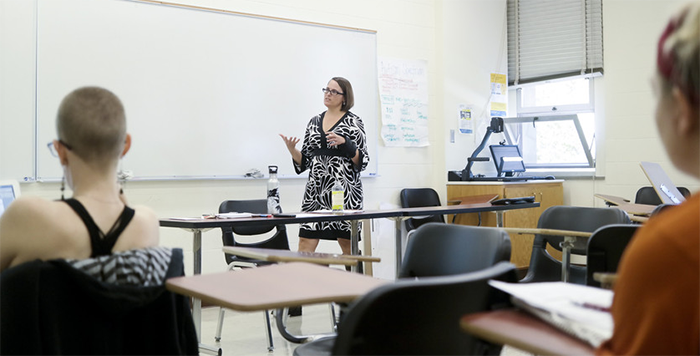 LAWRENCE — Anyone who has taught or had children in middle school knows it can be a difficult time. New research from the University of Kansas shows that students transitioning to middle school show evidence of declines in cognitive empathy, whether they displayed bullying behaviors or were a victim of them. Cognitive empathy is defined as the ability to take another person’s perspective. Prior research has shown that involvement in bullying behaviors is related to lower levels of cognitive empathy; however, little research to date has explored this relationship during the transition to middle school.

The findings that a majority of students in the study’s sample reaching middle school age showed a decline in cognitive empathy indicate that fourth and fifth grades would be an ideal time to focus on social and emotional growth in students and work on developing empathy skills to help prevent bullying behaviors, the research argues. Co-authored by Anne Williford, associate professor of social welfare at KU, the study was published in the journal Child and Youth Care Forum.

The study stemmed from research Williford started as a doctoral student. She tested an anti-bullying intervention with fourth- and fifth-graders in 28 Denver elementary schools. Half of the students received the intervention while the other half did not. The study also followed participants into sixth grade, or during the transition to middle school. The current study analyzed data from students in the control group – more than 425 – who did not take part in the program. The program collected data from the students in the spring of their fourth-, fifth- and sixth-grade years. The students were asked questions about whether they consider others’ perspectives if they are angry at them. As they reached sixth grade, fewer reported that they did.

“We found cognitive empathy declined as the students transitioned from late childhood into early adolescence, which coincides with the transition from elementary to middle school,” Williford said. “But we also found that, whether they had displayed bullying behaviors or had been victims of it, they still had decreased levels over time, which may represent naturally occurring changes in empathy over this school transition.”

That finding was notable as prior research has generally shown increased empathy in adolescents as they engage with others in their age group. The finding was also notable as the general assumption is that those who have been victimized by bullying would empathize with others because they understand how it feels. However, in this sample, students who had been victimized also showed declines in their cognitive empathy over time.

Williford said the findings show how important it is to focus on cognitive empathy as well as social and emotional learning skills for students in fourth and fifth grades. The transition to sixth grade often corresponds with a transition to a middle school, which requires young students to negotiate new social hierarchies, social structures, friendships and numerous other changes. Focusing on social and emotional learning skills such as cognitive empathy, friendship development and conflict resolution could help prevent bullying behavior before students enter middle school and help students make a more successful school transition, Williford said. Research has long shown middle school as a period when bullying behavior routinely increases. Such prevention would be valuable as bullying has been shown to negatively affect learning outcomes as well.

Previous research has shown that students develop more empathy later in their academic careers. This study was among the first to view empathy during late childhood and early adolescence as well as during the transition to middle school. It suggests the importance of preparing kids for a successful transition, Williford said.

“The findings suggest that maybe this decline in cognitive empathy occurs, then empathy proceeds to increase later in life as studies have shown,” she said. “The middle school transition is something that’s getting more attention in the literature as it can be a difficult time period for youth. We’re starting to view late elementary school – fourth and fifth grades – as an appropriate time to introduce interventions that encourage students to think about others’ perspectives and help support successful transitions to middle school. And we think it could be a good time for educators to introduce activities to support cognitive empathy development.”

The study is part of a larger body of research on bullying prevention. Williford and colleagues at KU have conducted additional studies examining Kansas students’ involvement in bullying and peer victimization They’ve also researched what teachers can do to improve the classroom climate as it relates to bullying by combining student-level interventions and teacher training. Publications are forthcoming on those studies.

The finding of decreased cognitive empathy in both bullies and victims, above all, highlights the need to address bullying prevention early.

“At the end of the day, I think this shows the importance of addressing the development of social and emotional learning skills to support students’ behavioral and academic success and their successful transitions to new school environments,” Williford said.

Photo: Anne Williford, professor of social welfare, is shown teaching at class at KU in this 2013 photo. Image from KU Marketing Communications