LAWRENCE — Braden Shaw, a University of Kansas junior from Shawnee, has been named one of five winners of the prestigious Jim Murray Memorial Foundation scholarship, a national award for excellence in sports writing at the college level. 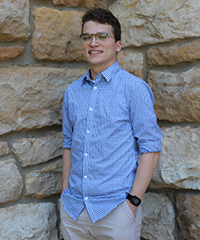 Shaw, who served as summer 2019 editor-in-chief of the University Daily Kansan, was chosen as one of the winners for a column he submitted about Pete Mehringer, who was a wrestler and football player at KU in the 1930s.

Mehringer is said to be the greatest wrestler ever to attend KU and was the first KU athlete to win an Olympic gold medal. He also played professional football and went on to become a stunt actor in Hollywood. He died in 1987.

"He worked on movies with Ronald Reagan and Bob Hope, and he was an extra for ‘Tarzan,’ and a lot of his off-the-field stuff I found very interesting — he was an engineer as well — and how he just kept going,” Shaw said. “He had very high goals and expectations, and he met just about every single one."

Shaw spent about two to three weeks researching and writing the story. He talked to Mehringer’s sister and granddaughter, contacted the Kansas Sports Hall of Fame and found information at KU’s Spencer Research Library.

"It was the most research I'd ever done for a story, and it was definitely a really cool experience to tell the whole story of his life,” Shaw said.

Shaw said he was surprised when he learned that he had won, not because he didn’t have confidence in his story, but because the contest is a well-established national competition.

"This was definitely one of the most formative experiences of my short sports writing career,” Shaw said. “It was a lot of fun, I had a good time and was happy to have won."

Shaw will be a sports intern at the Lawrence Journal-World this fall. He is on track to graduate in May 2021 from the William Allen White School of Journalism & Mass Communications with a bachelor’s degree in journalism and a double minor in sport management and film & media studies.

He will accept the award and the $5,000 scholarship at a ceremony Oct. 26 in Los Angeles. The Murray award competition is currently open to 35 journalism schools, which are each selected by the Jim Murray Memorial Foundation to participate and submit a single nominee for consideration.

The award honors Murray’s long and distinguished journalism career of more than 50 years, 37 of which were spent as a renowned sports writer for the Los Angeles Times.