OVERLAND PARK — U.S. Army World War II veterans Kenneth Tebow and John Martin provide rare insight into the Battle of the Bulge on its 75th anniversary. The men shared about their road to the battle, their personal stories, life after the war and reflections on Veterans Day during Mark Gerges’ Osher Lifelong Learning Institute course, “The Battle of the Bulge: Germany’s Last Blitzkrieg, December 1944.” At 99 and 96 years old, respectively, they live to tell the human experience behind one of the most poignant battles of the Second World War. 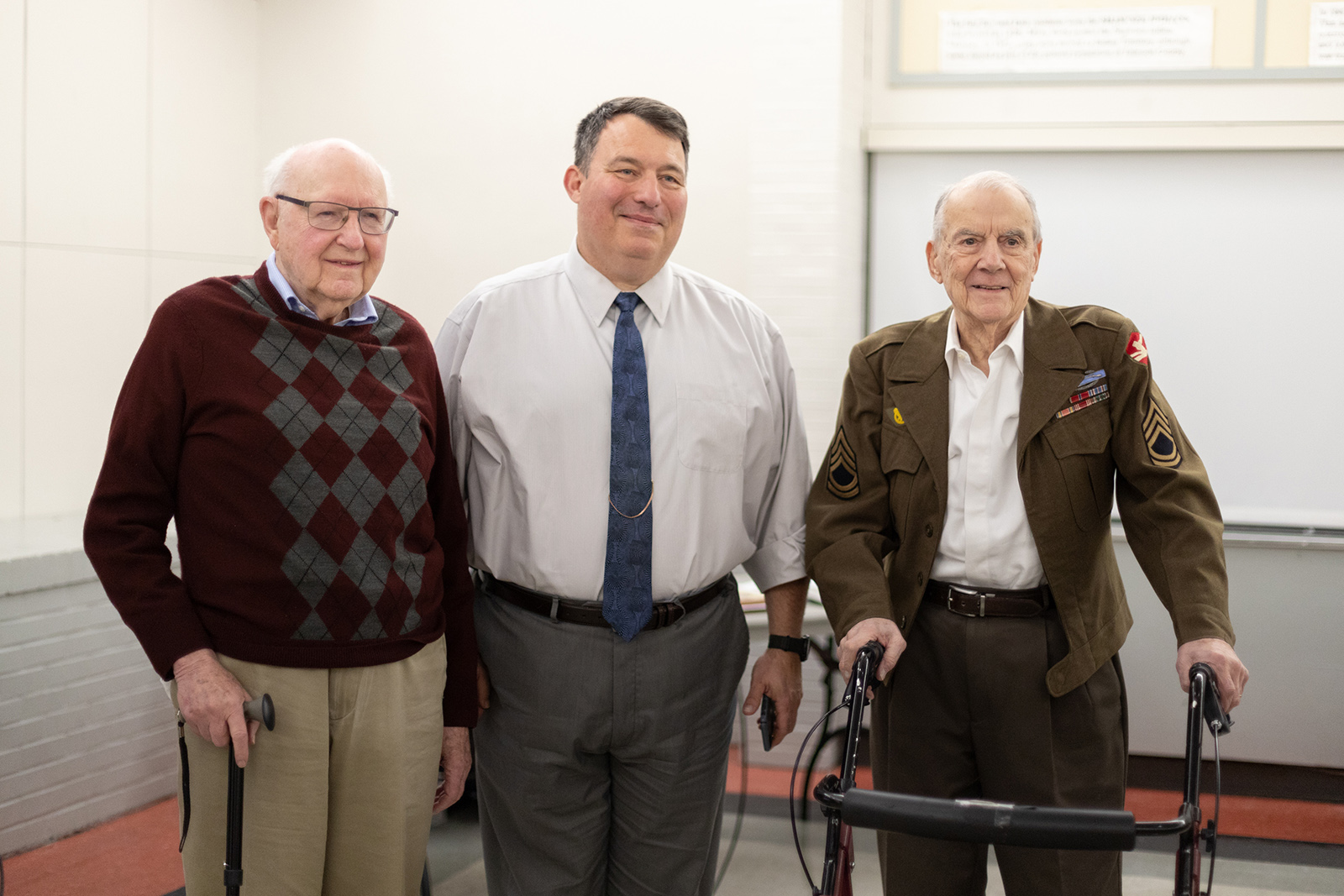 Part of KU Professional & Continuing Education, KU’s Osher Lifelong Learning Institute offers short-term enrichment courses for those aged 50 and older. Gerges – an Army veteran himself and associate professor of history with the U.S. Army Command and General Staff College – has been teaching for the Institute for nine years. Never before has he had a class participant with firsthand experience in his subject matter.

“It’s incredible what they suffered and went through,” he said. “The Battle of the Bulge is the U.S. Army’s single greatest victory, ever, and to have an infantryman [Martin] and a man from the 106th Infantry Division [Tebow] is incredible. They are humble about it, but they both played key roles in the battle.”

The Battle of the Bulge refers to the monthlong surprise German counteroffensive in the Ardennes Forest from December 1944 to January 1945, just five months before World War II's end. The Germans broke through an exhausted American front, creating a protrusion, giving the battle its famous name. American troops were able to eventually push back “the bulge,” but not without significant losses, with 75,000 American casualties and 80,000-100,000 for the Germans.

The strikingly cold conditions, overwhelming losses and the sense of bewilderment and exhaustion still stick with the two men today, remembering these encompassing feelings vividly.

“One of the things I don’t think people ever understood is what it’s like when you’re in that situation and you’ve got bullets flying, cold snow, and all of the things that go with combat,” Tebow said. “When people look at the pictures [from the Battle of the Bulge], they think, ‘Wow, it was cold.’ There’s just a lot more to it than that.”

Tebow didn’t talk about the war until the 50th anniversary of the Battle of Bulge rolled around. At the nudge of family and friends, he then began to share about his experiences. When he and Martin discovered the Osher course covering this all too familiar battle 75 years later, they were ready to learn more.

“I thought Mark would want an eyewitness to make sure what he said was true,” Martin joked. “He’s done a terrific job. He gives us the big picture. I know my situation. Mark’s explained a lot of the Bulge I didn’t know anything about.”

To connect with Tebow, Martin or Gerges, or for more information, contact Hannah Lemon with the KU Edwards Campus at hannah.lemon@ku.edu.

About The University of Kansas Edwards Campus
The KU Edwards Campus at 127th Street and Quivira Road in Overland Park brings the high-quality academic, professional and continuing education programs as well as research and public-service benefits of KU to the Greater Kansas City community in order to serve the workforce, economic and community development needs of the region.

Photo: Mark Gerges (center) – U.S. Army veteran, associate professor of history with the U.S. Army Command and General Staff College and instructor of the KU Osher Lifelong Learning Institute Course, “The Battle of the Bulge: Germany’s Last Blitzkrieg, December 1944” – stands with World War II and Battle of the Bulge veterans Kenneth Tebow (left) and John Martin (right) during the last session of his Osher course on Nov. 4 at the Roeland Park Community Center.