LAWRENCE – A paleontologist chronicling the prehistoric origin of bird flight and a chemist creating new technologies for personalized cancer treatment are the recipients of the inaugural KU Research Achievement Awards.

The awards were established in 2018 to recognize the numerous contributions of unclassified professional staff to the research mission of the University of Kansas. Honorees receive $5,000 to be used for approved research or professional development activities.

“Our selection criteria for these awards are demanding,” said John Colombo, interim vice chancellor for research. “Winners must be conducting research that expands intellectual or societal insights and has significant influence in their fields. The work of Dr. Burnham and Dr. Jackson certainly rises to this standard and speaks to the breadth, depth and vibrancy of research occurring beyond the faculty ranks at KU. We are proud of their accomplishments.” 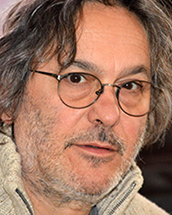 David Burnham’s lab at the Biodiversity Institute & Natural History Museum cleans and prepares fossils for research and exhibits, but his personal research is more narrowly focused on the origin of flight in birds. He has examined hundreds of specimens, including extinct feathered gliders and primitive fliers from China as well as the first known birds from Germany. His lab has built scientific models and conducted flight tests for the primitive glider Microraptor, which became a NOVA documentary, “The Four-Winged Dinosaur,” on PBS. Burnham has published many journal articles with collaborators on sickle-clawed, dinosaurian raptors, including descriptions of multiple new species and the first known venomous raptor.

Most recently, Burnham has turned his attention to the iconic Tyrannosaurus rex. As leader of a KU team conducting fieldwork in the Montana badlands, he is excavating and publishing research on a rare juvenile T. rex specimen from the Hell Creek Formation.

“Dr. Burnham’s achievements are all the more remarkable because his major staff responsibility is preparing fossil material for research by faculty, students and visiting scholars, as well as managing the vertebrate paleontology laboratory,” said Leonard Krishtalka, director of the Biodiversity Institute & Natural History Museum. “Yet his productivity in research, research training and mentoring, and formal and informal science education rivals and exceeds that of many research faculty. His discovery and analysis of the juvenile T. rex promises to revolutionize our understanding of the development and growth of these dinosaurs 66 million years ago.” 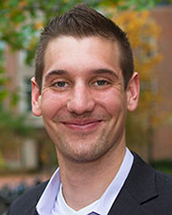 Matt Jackson is technically an analytical chemist, but his research extends to bioengineering, molecular biology and clinical studies. His primary focus is creating new “liquid biopsy” technologies for personalized cancer treatment. These devices can process blood samples, extract cancer biomarkers and provide clinicians with real-time data on whether a therapy is working for an individual patient.

Since joining the Soper Research Group in KU’s Department of Chemistry in 2016, Jackson has developed tools to study a new class of virus-sized vesicles that human cells use to communicate across the body, built a flow cytometer for rare cell analysis and, most recently, worked on nanoscale technologies that can sequence single molecules of DNA. Through the National Institutes of Health-funded Center of BioModular Multi-Scale Systems, Jackson collaborates with researchers at KU and beyond, and he has trained and mentored five KU graduate students.

“I consider Dr. Jackson to be one of the top postdoctoral fellows that I have worked with,” said former supervisor Stefanie Jeffrey, the John and Marva Warnock Professor at the Stanford University School of Medicine. “I fully support his aspirations to develop innovative technologies that aim right to the heart of his goal: to positively affect patient care and society at large.”