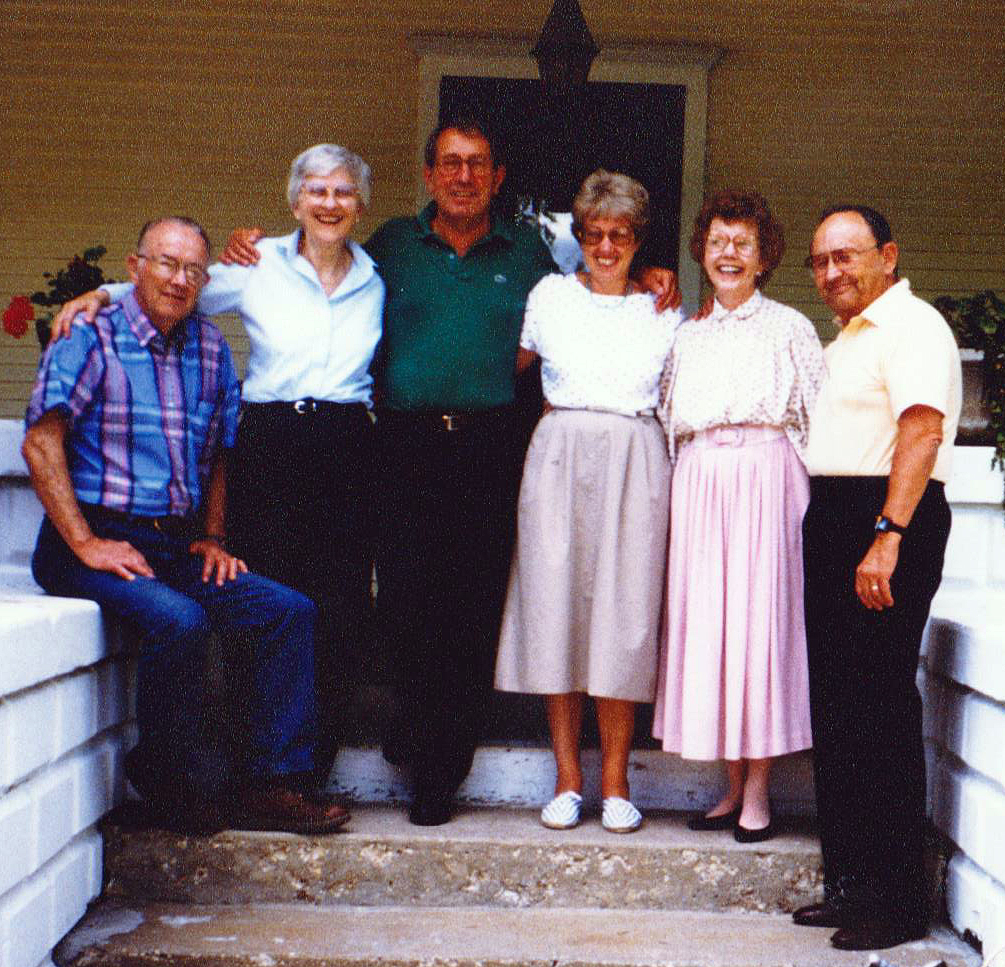 LAWRENCE — More than 66 years ago, Betty Grimwood picked up a magazine in a doctor’s office and read an article about a community in Iowa that had invited international students into their homes. Grimwood, who at that point in time had never traveled outside the country, had the idea of starting a similar program in the small farming community of Burns.

The idea has grown into the University of Kansas Betty Grimwood Thanksgiving Homestay Program, which over the years has gained national recognition and brought thousands of international students into Kansas homes. For Betty Grimwood, her husband, Ed, and two sons, Charlie and Tom, the program fostered relationships that spanned generations and continents.

After reading the article about the Iowa community, Betty Grimwood reached out to several Kansas universities, and KU was the first one interested in participating. In 1954, Tom Grimwood was 3 years old when his mother and her good friend and co-organizer, Bonnie Lohrentz, drove three-and-half hours northeast to KU to pick up about 10 international students for the first Thanksgiving stay.

Looking back, Tom Grimwood said it was his mother’s general desire to know people and the Christian tenet of showing kindness to strangers that provided the motivation to open her home to international students and convince her neighbors to do likewise.

“One of the happiest times of the year was always Thanksgiving, but the saddest time was the Sunday after Thanksgiving because that is when all the students went back,” he said.

For students such as Tilahun Wubneh, who stayed with the Grimwoods on two occasions in the 1950s as a KU civil engineering student from Ethiopia, the program was an opportunity to bond with an American family and learn more about life in the U.S.

“It helped me adjust to my new surroundings and provided me with a family in a country where I had none,” Wubneh said.

The Grimwoods’ hospitality was especially important for Wubneh, who lived in Lawrence at a time when discrimination was common, and some businesses refused to serve people of color.

“We were welcomed with open arms at the Grimwoods’ home,” Wubneh said. “For people of color, like myself, that meant a lot.”

Wubneh returned to Ethiopia in 1957, but his relationship with the Grimwoods continued. Through letters, telephone, email and WhatsApp, Wubneh has maintained a lifelong friendship with the family, which continued through Tom Grimwood after Betty Grimwood died in 1999 and Ed Grimwood in 2004.

In Ethiopia, Wubneh worked for the Imperial Highway Authority and then the United Nations Economic Commission for Africa, where he eventually headed the Trans-African Programme. In 1978, Wubneh and his family escaped the brutal military government ruling Ethiopia and returned to the United States, working for the United Nations Office for Project Services in New York until he retired in 1995.

Wubneh visited the Grimwoods in 1967, several times in the 1980s and returned several years ago to visit the cemetery where Betty and Ed Grimwood were buried. Their connection led the couple to sponsor two of Wubneh’s relatives, students who fled Ethiopia due to political turmoil and civil unrest. Both students lived with the Grimwoods in Burns for two years until they graduated from high school in May 1981.

“We developed a sincere, genuine friendship which stood the test of time and has continued with Tom. I consider the Grimwoods as family,” Wubneh said.

One KU student became family because of her connection to the Burns community. In 1957, Berit Spilhaug Johns received a Fulbright travel grant and a grant from the Kansas Federated Women’s Club to study American literature at KU. For her first Thanksgiving, Spilhaug Johns was too busy writing term papers to make the trip. So, the Grimwoods invited her to come later in the school year.

Spilhaug Johns visited Burns several times in 1958 and 1959 and remembers warm summer evenings sitting on the porch with Betty Grimwood drinking iced tea and talking about the day. She also recalls flying with Ed, who was piloting the plane, as they surveyed the devastation of an F4 tornado that had hit El Dorado that year.

The Grimwoods also introduced her to neighbors and friends, including Grace and Wilbur Whitham from nearby Cassoday. In 1961, Spilhaug married Grace’s brother Lawrence Johns, who was living in San Francisco, and she began teaching Norwegian at the University of California at Berkeley. In 1964, they had a son, Bjørn. The two later divorced, but Berit remained close with Grace and the Grimwoods.

“What originated in the homestay program had a strong impact on my life,” Spilhaug Johns said. “The connection has lasted for more than 60 years because Betty and I formed a strong friendship, and Grace was also part of that friendship. So, it was natural that we kept in touch after I had gone back to Norway. And when Charlie and Tom got older, the contact broadened, and they became part of my circle of friends as well.”

Spilhaug Johns, who earned her master’s degree in American literature at KU, spent her career in higher education teaching Norwegian to international and American students, as well as teaching English and English teaching methods in Norway.

Along with the connection to the residents of Burns, Spilhaug Johns noted that the KU students who participated in the homestay program bonded.

“The homestay students had much social contact on the campus. We met each other at parties and other gatherings, and some of us have kept in touch through emails at Christmas,” she said. “My knowledge of the world was considerably widened by the contact with the international students I met at KU.”

Tom Grimwood said the same was true for Burns. 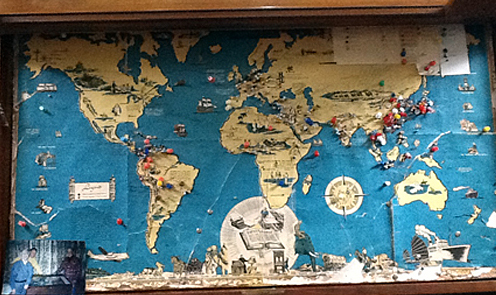 In 1959, the homestay program gained national recognition when then-Vice President Richard Nixon presented to the Grimwoods on behalf of the community of Burns a Distinguished Service Award from the Institute of International Education. The same year, the program was featured in the Saturday Evening Post. Shortly after her death in1999, KU officials renamed the program in memory of Betty Grimwood.

While the people of Burns opened their homes to visiting international students, the world opened to Burns. Although not everyone in Burns hosted a student, many in the community came to a potluck dinner that was held the weekend after Thanksgiving. The community dinner continued well into the 2000s, thanks to the efforts of another strong supporter of the program, Esta Hall.

In 1973, Betty and Ed Grimwood took their first trip out of the country to Venezuela, visiting one of the students who had stayed with them years earlier. They also traveled to Norway to visit Spilhaug Johns and reconnected with other students they had hosted while on trips in Europe.

Among the first students to visit Burns were Pierre Bonnavaud, a French Fulbright scholar at the KU School of Business, and Birgitta Haglund, a Swedish student. The two married in 1958 and continued to stay in touch with the Grimwoods. In 1987, their son Stephane stopped in Burns on a cross-country trip of the United States. Two years later, Bonnavaud and Haglund returned to Kansas, visiting Lawrence and Burns. Over the years, Betty, Ed and Tom Grimwood visited the family several times in France.

For Tom Grimwood, his early interaction with the international students led to a curiosity about the world and interest in geography. The family’s first student was Carmen Libertino, a bacteriology student from Colombia. It was a connection that years later led Tom Grimwood, then a student at Kansas State University, to a presentation about another South American country, Bolivia. He went on to become good friends with several Bolivian students at the event, visiting the country several times before moving there, where he lived for 18 years and met his wife, Nedy.

In 2000, Tom Grimwood and his wife returned to Burns and continued the tradition of hosting students for Thanksgiving. In 2018, Sile “Victor” Li, a Chinese student studying intercultural communications, stayed with the Grimwoods for three nights. During his time, he had the opportunity to eat a Thanksgiving meal with the large extended family, watch Tom’s son Christopher play basketball, and learn about the history of the town.

“I studied English for my bachelor and master’s degree, so I know a lot about American culture. But it was still the first time for me to live in an American’s house and experience the genuine everyday life of Americans living in a town,” Li said.

Li, now a doctoral candidate in Beijing, continues to email Tom Grimwood, who updates him on his son and what he is growing in his garden.

“We have a connection, and we want this special connection to continue even as time goes along,” Li said.

A table set for cultural exchange

The Thanksgiving Homestay Program continues at KU, although due to safety concerns around COVID-19, KU international students will not be joining families in their homes in 2020. In recent years, about 30 international students sign up for the opportunity to gather at a stranger’s table for a Thanksgiving feast. Most of the students remain in Lawrence for a daylong visit, but at least one will travel to Burns.

Tiffany Learned, the program coordinator for International Support Services, said that for the hosting families, the program is an opportunity to recreate the archetypal Thanksgiving with a table filled with people from different backgrounds coming together to share a meal and give thanks to and for one another.

“For our participating students, it’s not only a chance to experience an American tradition firsthand, but they are also often surprised to find themselves being celebrated with gratitude by our families for their willingness to come to the table, so to speak, to engage meaningfully in a culture outside of their own,” Learned said.

This year as many Americans face a Thanksgiving apart from those they love, these lifelong friendships first formed around a family’s dinner table provide a reminder of the ability to stay connected despite the miles that separate.

Top photo: Taken during a 1989 reunion in Burns, the photo pictures, left to right, Ed and Betty Grimwood, Pierre and Birgitta Bonnavaud, and Bonnie and Walter Lohrentz.

Right photo: The Grimwood family maps, which marks the countries of international students they have hosted.