LAWRENCE — As the song goes, it’s not easy being green. And without the proper lighting, it isn’t easy for plants living indoors to stay green, either. 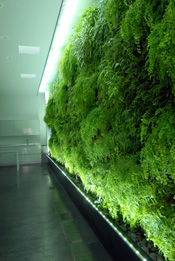 But recently the University of Kansas Department of Architecture’s Studio 804 teamed up with Sunlite Science & Technology Inc., a manufacturer of advanced LED lighting products, to revive a large wall of indoor plants at KU’s Center for Design Research, also known as the CDR.

Sunlite’s office is located in the Bioscience and Technology Business Center on KU's west campus.

Studio 804 is a yearlong design-build class offered by the architecture department. Every year its students design and build an entire building, including the CDR, constructed during the 2010-2011 school year.

The building is a locus for interdisciplinary work between multiple schools and aids the education of the university and community on sustainable design strategies, materials innovation and resource conservation and efficiency.

When they designed and built the Center for Design Research in 2011, one of its most prominent features was a “green wall.” The large 34-foot-long by 11-foot-high wall is located in the CDR’s main seminar room. It is alive, made up of 10,000 ferns, each hand-planted by the students.

Green walls are an enjoyable visual alternative to almost any wall surface, but they have many other benefits as well. They change carbon dioxide present in the air to oxygen, purifying it. Some research even suggests that the presence of green walls in interior environments increases the well-being and productivity of those who occupy them.

However, the single row of miniature MR16-style LED spotlights and skylights originally installed at the CDR didn’t provide enough light to keep the plants healthy. Carts fitted with banks of fluorescent lamps rolled in front of the walls several nights a week did not improve their health.

And that’s where Sunlite’s LED technology came in. According the company’s vice president of technology and owner Jeff Chen, Sunlite’s products stand apart from the huge number of LEDs crowding the marketplace.

They use some of the industry’s brightest LED chips placed into small reflectors. “The application-specific modules, composed of the chips, reflector and lens, are precisely designed for each individual application, so that even though they are extremely small and very close to the plants they still spread the intense light over a wide area,” said Chen.

“Keeping the entire fixtures small with enough surface area to dissipate the heat from high-powered chips is one of the most difficult things to accomplish in an LED design, but so necessary to make the lighting work in this situation,” he said.

After Studio 804 used Sunlite’s LED strip-light fixtures to successfully light a green wall at another facility, they replaced the CDR’s original lighting system. Based on recommendations from Sunlite, and Katie Sadler, greenhouse manager at the Department of Ecology and Evolutionary Biology, they chose LEDs that are rich in the blue portion of the light spectrum.

Research indicates this kind of light does an excellent job of stimulating vegetative growth. In addition, the LEDs are far more efficient than fluorescent and especially incandescent lights. The new installation provides far more light while actually using less electricity than the original lighting.

After a trial period that now exceeds eight months, Sadler is impressed by how well the ferns have responded. “The LED light strips have provided a great amount of cool light which has made plants in the bottom and top thirds of the walls rapidly fill in to an enormous degree.

“We saw an immediate response of new shoots in those areas, which receive light 14 hours a day,” she said.“It has been surprising that little fern plants can grow so full and large. Both the quality and quantity of light that the LEDs provided were instrumental in revitalizing the plants.”

“Without Sunlite technology, Studio 804 never would have been able to achieve the kind of light we needed and most likely would have had to cut way back on the entire concept,” said Dan Rockhill, the J. L. Constant Distinguished Professor of Architecture, who directs the Studio 804 program. “We tried other ways of lighting the living wall at the CDR but were never satisfied. We eventually retrofit the entire lighting system to incorporate only Sunlite Science & Technology’s lighting.”

Studio 804 has used Sunlite’s products to light the green walls at Johnson County Community College’s Galileo Pavilion building in Overland Park. Most recently they were used by the Studio to light the Hill Engineering Research and Development Center.