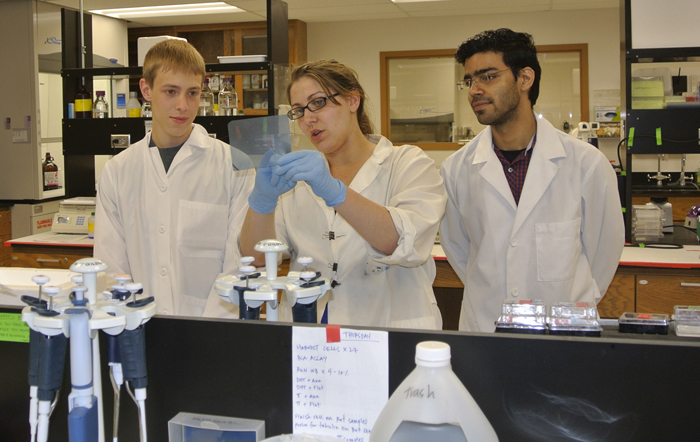 LAWRENCE — Today, more than 5.1 million Americans live with Alzheimer’s disease, a devastating type of dementia that plagues memory and thinking. That number is expected to triple in the coming decades. Moreover, according to a 2012 survey, Americans fear Alzheimer’s more than any other disease.

But studies looking into treatments for Alzheimer’s disease have been frustratingly disappointing.

“There is no cure for Alzheimer’s disease,” said Liqin Zhao, assistant professor of pharmacology and toxicology at the University of Kansas School of Pharmacy. “Five available Alzheimer’s disease drugs were all approved by FDA 10 years ago, and they provide only temporary symptomatic relief for an average of six to 12 months.”

Zhao said that over the last decade, more than 100 human trials aimed at Alzheimer’s disease treatment have been conducted with little success.

Now, she’s part of a KU team that has published a breakthrough investigation into human ApoE2, a seemingly protective “apolipoprotein” created by the ApoE gene — a gene associated with Alzheimer’s disease risk. The research appears in the Journal of Alzheimer’s Disease 48(2).

“Human ApoE is polymorphic and exists in three major alleles — ApoE2, ApoE3 and ApoE4,” Zhao said. “ApoE2 is a rare form and is considered neuroprotective. ApoE3 is the most common form and considered to play a neutral role in AD. ApoE4 is the greatest genetic risk factor for late-onset sporadic AD — ApoE4 occurs in only about 20 percent of the total population but accounts for approximately  50 percent of the Alzheimer’s disease population.”

According to Zhao, too much previous research has focused on ApoE4 — many of them focused on ApoE4-mediated neurotoxic mechanisms by comparing ApoE4 to ApoE3, or ApoE4 carriers versus non-ApoE4 carriers. By contrast, she said ApoE2 has largely been ignored with only a few published studies that included ApoE2 in their designs — until now.

“We took a different approach and looked from a different angle,” Zhao said. “We asked the question: What makes ApoE2 carriers resistant to Alzheimer’s disease? Our rationale is that if we can figure out the mechanisms that underlie ApoE2-mediated neuroprotective properties, we could translate this molecular understanding into a therapeutic strategy aimed to transform an aging brain — in particular an ApoE4 brain into an ApoE2-like brain. Such a strategy could essentially increase the defense ability of the aging, ApoE4 brain against the development of Alzheimer’s disease.”

The KU researcher believes several factors could have contributed to the current trend of lost-in-translation from preclinical findings in animal models to trials in humans.

“Another possibility could be that when the disease gets to the mid-to-late stage, the damage in the brain could be too advanced to be altered by the drugs tested in those trials,” she said.

Zhao believes the trend of clinical failures stresses a tremendous need for the development of strategies that can be used for prevention, risk reduction or early intervention at the preclinical stage of the disease, in addition to continuing the effort of finding an effective treatment.

“Alzheimer’s disease is a unique brain disease in that it begins with a very long preclinical development phase — 10 to 20 years — before it can be clinically diagnosed,” she said. “During this long prodromal period, the brain undergoes many changes including two major ones — decreased glucose utilization and increased amyloid deposition.”

Zhao’s KU colleagues on the study published in the Journal of Alzheimer’s Disease are Jeriel Thomas-Richard Keeney and Shaher Ibrahimi.

“This study essentially opens up a new line of research for us,” Zhao said. “We’re currently expanding our investigations to further test  our hypothesis that bioenergetic robustness could serve as a major mechanism whereby ApoE2 delegates neuroprotection. If our hypothesis proves true, we can move forward with the idea that a strategy that enhances brain energy metabolism holds great promise for prevention, risk reduction or delaying the onset in an aging brain — in particular an ApoE4 brain — of Alzheimer’s disease.”

Photo: Graduate and undergraduate students work the lab of Liqin Zhao, assistant professor of pharmacology and toxicology at the School of Pharmacy. Image courtesy Liqin Zhao.