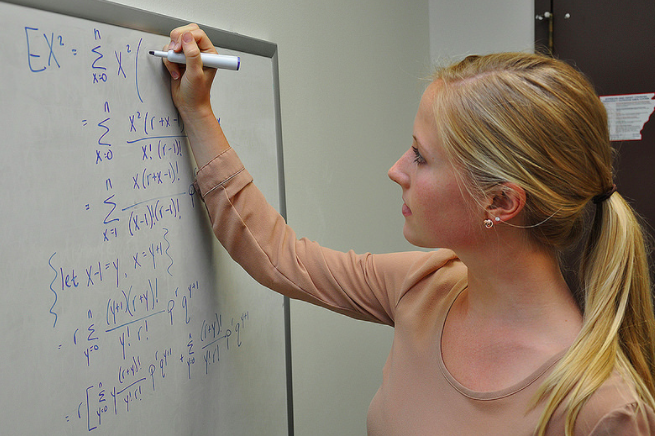 LAWRENCE — More parents today are financially supporting — and paying more — for their children's college education, but that development also might be exacerbating economic inequality, according to a new study by a University of Kansas professor.

"Young adults from families in the top quarter of the wealth distribution received more than 11 times more money for school than those in the bottom half," said Emily Rauscher, assistant professor of sociology. "What makes this a concern is that financial support from parents for education is associated with higher socioeconomic outcomes, including income, education and wealth. A key takeaway is that parental financial support for education is one way in which economic inequality is passed between generations. Parental wealth matters for a variety of child outcomes, and the findings of this study suggest that it matters even in young adulthood."

The Russell Sage Foundation Journal of the Social Sciences recently published Rauscher's findings. She compared the amount of funding parents transferred to their children for educational purposes using the Rosters and Transfers Module of the Panel Study of Income Dynamic, which provides survey data from 1968-2013.

Rauscher said the study's findings have implications for inequality and suggest several potential education and economic policies, especially in explaining and dealing with economic inequality.

"Those from poor or low-wealth backgrounds are forced to fend for themselves earlier in their lives than the privileged adolescents," she said. "Receiving parental funding for college is one example. Young adults from poor backgrounds do not enjoy this parental support for college."

Rauscher noted that parental support for education could be viewed both positively and negatively. It can help many young adults earn a college degree.

"One potential concern, though, is that parents may be supporting their children's education at the expense of saving for retirement," Rauscher said. "That could put the parents in a difficult situation as they age, leaving them without enough savings to retire."

She said recognizing parental financial transfers for education as one mechanism through which inequality is transmitted across generations could be critical as policymakers in states and Congress grapple with economic legislation.

"It signals where our society could invest to allow young adults to achieve economic outcomes based on their own hard work, rather than that of their parents," Rauscher said.

For example, these findings could point to the importance of higher education spending outside of tuition and funding of federal Pell grants, the McNair Scholars Program and work-study programs, all of which help students of low-income or first-generation college students. Also, another area of research has suggested most high-achieving, low-income youths don't apply for selective colleges, even though those colleges provide better financial aid and have higher-degree completion rates.

"In order to put young adults on more equal footing," Rauscher said, "my results suggest that society could either fund higher education for all or provide young adults from poor backgrounds with the same financial support that wealthier young adults receive from their parents,"

KU's Center on Assets, Education, and Inclusion in the School of Social Welfare supported the research. Rauscher serves as the center's faculty director for the wealth transfer project.