LAWRENCE — A doctoral student of ecology and evolutionary biology at the University of Kansas and Kansas Biological Survey has earned a National Geographic Young Explorer’s grant to investigate how soil microbes drive plant invasion in the Galapagos Islands — a biodiversity hotspot famously studied in the 1830s by Charles Darwin during the trip chronicled in “The Voyage of the Beagle.”

Camille Delavaux recently left for the Galapagos — not an easy trek. First, she made her way to the capital of Ecuador. 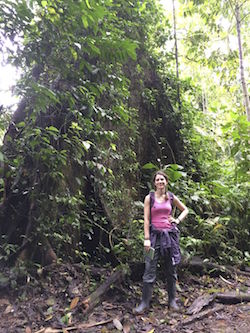 “I travel using all kinds of transportation,” Delavaux said. “I fly to Quito, take a bus to our mainland site in Machalilla National Park, take another plane to the Galapagos Island of Baltra, then a ferry to Santa Cruz Island. At our field sites, we live in hostels, hotels or dorms and drive to get to our field sites.”

Delavaux studies mycorrhizal fungi and plant pathogens in the context of plant invasion in tropical ecosystems.

“More and more, we are seeing the important role of microbes in individual plant success and also in maintaining plant community structure or diversity,” she said. “Although invisible to us, microbes can be beneficial to plants and ecosystems but may also harm them. Because they can determine plant community structure, shifts in soil microbes can either accelerate or slow down plant invasions. I study how microbes mediate plant invasions.”

According to Delavaux, the Galapagos offer an ideal setting to study plant-microbe interactions, where long-present plants are mixed with invasive plant species from mainland Ecuador, with each group having its own associated microbes.

“Because the Galapagos are relatively young, we still see initial colonizers on the island,” she said. “In terms of invasion, that means we’re catching the invasion as it’s happening. There are sites that are uninvaded and represent an early stage of plants on the island, and then there are sites with both invasive plants and native plants. In the Galapagos, we can see how the invasion is altering the diversity and composition of microbes and what the impact is on native plants.”

In the field, Delavaux said, “an average work day is usually not very average.”

“For part of the trip, we will be taking soil and root samples of native and invasive plants and shipping them back to KU,” she said. “Another part of the trip will be spent training undergraduates in the laboratory to extract DNA from our samples.”

The KU student researcher will be focused on arbuscular mycorrhizal fungi — or “AMF” — and pathogenic soil fungi.

“AMF are found in the majority of plants in the world,” Delavaux said. “They help bring nutrients and water to plants in exchange for plant carbon or sugar. They also help protect against diseases and help stabilize soil structure. Pathogenic fungi are a large group of fungi that act as pathogens, or in a negative way, toward plants. There is also evidence that they improve diversity of a whole plant community by limiting the success of any one species.”

She said that earning the National Geographic Young Explorer’s Award was an “exciting” achievement, especially because a prior application wasn’t funded.

“I applied to this award last year and didn’t receive it,” Delavaux said. “It’s great to try again and succeed. I think a big part of ‘my’ success is that my advisor, Jim Bever, spent a lot of time with me discussing this project and worked with me writing and rewriting the grant.”

Indeed, after earning a Master’s degree at Yale, Delavaux said it was Bever, Foundation Distinguished Professor of Ecology and Evolutionary Biology and senior scientist with the Survey, that drew her to study for her doctoral degree at KU.

“What brought me to KU was Jim,” she said. “My approach to applying to Ph.D. programs was pretty straight forward — find the authors I kept seeing great work from and apply to their programs.”

Delavaux also credits Alice Tipton, a post-doctoral researcher in her lab, and Andy Bentley, the collection manager for Ichthyology, for help in her current work.

“I have only been here under a year, but KU has already helped me in many ways,” she said.

Delavaux’s project in the Galapagos is a collaboration between the University of Kansas, the Universidad de las Fuerzas Armadas in Quito and the Darwin Station on Santa Cruz Island, Galapagos.

She said conducting research abroad, though exciting, requires “a tremendous amount of persistence and flexibility.”

“Working with others and finding a way to get through all the inevitable obstacles is important,” Delavaux said. “That being said, I keep coming back. All of this doesn’t happen because of one person, but through teamwork and collaboration. Students shouldn’t feel discouraged or overwhelmed; if you are excited about something, someone else probably is too. Team up and make it happen.”