LAWRENCE — On Nov. 28, Yale University Press will publish “The First Domestication: How Wolves and Humans Coevolved.” The book is co-authored by Raymond Pierotti, associate professor of ecology & evolutionary biology and environmental studies at the University of Kansas, and Brandy Fogg, who received her undergraduate degree in environmental studies and a master’s degree in Indigenous nations studies at KU. 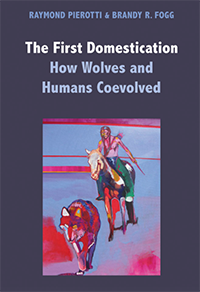 The new book traces a co-evolution of wolves and Paleolithic people who cooperated for mutual benefit — a narrative that runs counter to the popular ideas of wolves depending upon human refuse dumps as important foraging sites, or of people “taming” wolves through domination.

“Our feeling is that for a very long period of time, perhaps 20,000-30,000 years, early modern humans and wolves lived in a relationship that was fairly open and depended upon the decisions made by the wolves as much or more than the humans,” Pierotti said.

The KU researcher said humans and wolves hunted together much in the way that many species, such as coyotes and badgers, or moray eels and groupers, feed cooperatively today.

“One species would come and solicit the other species to join them,” Pierotti said. “If the invited species was interested they would form a mixed species group and go and hunt together. There were probably parts of the world where ravens also joined this twosome because ravens still hunt cooperatively with both humans and wolves to this day.”

Early peoples derived clear benefits from their association with wolves, starting with better success in hunting, while the wolves obtained an ally that increased their rate of effective hunting as well.

“Wolves were much faster and more experienced at hunting large prey,” Pierotti said. “My colleague Pat Shipman at Penn State believes wolves even helped in mammoth kills, and there are hundreds of stories of wolves helping humans run down or capture large prey like bison or elk. The wolves benefited because once a prey had been run down, humans were probably much quicker and more efficient at dispatching the prey. Once wolves began to live more closely with humans they would have been outstanding sentinels and guardians. I always laugh when I see images of early modern humans huddled around a fire, quaking in fear when they hear a big cat roar. They probably slept more securely than we do today — there are reports of Native American encampments guarded by ‘hundreds of wolves.’”

Eventually, according to Pierotti, some wolves who chose to live with humans became less wolflike, and people might have decided to live alongside wolf puppies that seemed more sociable.

“Over time, somewhere around 15,000 years ago based on archaeological findings, some wolves were actually changing in form with smaller bodies, shorter snouts, possible floppy ears,” Pierotti said. “These were the animals that many identify as the ‘first domestic dogs,’ although this depends upon what your definition is of domestication. Some think it has to show major changes in the phenotype that are recognizable in the archaeological record, although we have several species of mammal that we consider domesticated that have not changed in appearance from their ancestors — for example, Asiatic elephants, camels, reindeer, and cats and horses are little changed from their ancestors, compared with dogs, cattle, pigs, goats and sheep.”

Pierotti said a number of dogs today still resemble wolves — to such a degree that some people actually mistake them for wolves.

“This is a situation that keeps me somewhat busy as an expert witness,” he said.

According to Pierotti, the idea that wolves are “vicious and aggressive” whereas domestic dogs are “tame and friendly” is a mistake made by most people.

“The opposite is actually closer to the truth, as any regular viewer of Cesar Millan’s program ‘The Dog Whisperer’ should acknowledge,” Pierotti said. “Many dogs are aggressive towards humans — especially unfamiliar humans — and the number of people killed by dogs is orders of magnitude higher than the numbers killed by wolves. Wolves tend to be very shy and typically retreat or hide from humans. I have colleagues who study wolves, who rarely if ever see them in the flesh, outside of captivity. Many large dogs are potential threats to unfamiliar humans, especially if they are not well-socialized — this is what keeps Millan in business. I have been bitten many times by dogs, but never by a wolf or even a wolf dog-cross.”

Pierotti said wolves today don’t show doglike behavior, but all wolf behaviors are reflected by at least some breeds of dog.

“The main difference is that many breeds in dogs fail to develop emotionally and remain in a state of ‘puppyhood’ throughout their lives,” he said. “Wolves mature and become more independent of humans as they age past of two or three years of age. At this point, when you live with them, the relationship is more egalitarian than that of master and pet. Some breeds like border collies, Alaskan Malamutes, Siberian huskies are much more wolflike in their overall behavior than many breeds with which most people are familiar, such as beagles, hounds, spaniels and retrievers.”

But he’s quick to give credit to his co-author, a KU alumna.

"Brandy Fogg initiated much of this work during her research for her master’s degree in Indigenous nations studies at KU,” he said. “Brandy is an excellent scholar, currently employed doing important work that shows the breadth of her interdisciplinary approach to scholarship. She began to work with me as an undergraduate through KU’s McNair Scholar’s Program, where she did a research project on dog behavior while completing her degree in environmental studies.”

Pierotti said his new book is geared toward academics and wildlife biologists. However, the author said anybody interested in wolves would find the book a fascinating read. Indeed, his publisher is marketing the book to “anyone interested in human evolution, ecology, animal behavior, anthropology and the history of canine domestication.”

Photo: The Alaskan Black wolf Romeo, who was very friendly with people and dogs. Photo by David Willson, from a collection of Nick Jans.