LAWRENCE — The University of Kansas community is mourning the death of its 15th chancellor, Del Shankel, who died July 12 in Lawrence. He was 90.

"I am deeply saddened by the passing of Chancellor Shankel, and I offer my sincere condolences to his family, friends and colleagues,” said Chancellor Douglas A. Girod. “During his five decades of service to our university, Chancellor Shankel established a remarkable legacy of leadership and scholarship and touched the lives of countless Jayhawks. He will forever have a special place in KU history.” 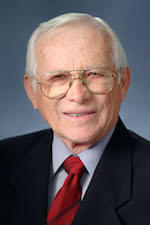 Delbert M. “Del” Shankel was the only individual to have served as KU’s chancellor twice.

Shankel was acting chancellor for the 1980-81 academic year. In 1994 he was interim chancellor for seven months before the Kansas Board of Regents designated him chancellor. In 1995, he left that role and was granted chancellor emeritus status.

“On a personal note, Chancellor Shankel has been a valued advisor to me since I became chancellor last year,” Girod said. “I will miss his counsel and the pleasure of seeing him on campus. I encourage Jayhawks to use the coming days to reflect on Chancellor Shankel’s life and contributions to KU.”

Stepping up to fill in as needed is the narrative of Shankel’s career at KU. His roles included acting chair of the microbiology department, half-time assistant and later half-time associate dean for the College of Liberal Arts & Sciences, special counselor to Chancellor Gene Budig, acting athletic director and interim president and CEO of the Alumni Association. Shankel also has the distinction of being the university’s first executive vice chancellor.

Although his colleagues repeatedly asked him to step up to another leadership role, Shankel said that at one point in his career he didn’t seek any permanent rank beyond that of professor. He told a Lawrence Journal-World reporter in 2008 that he attributed his success to keeping his ego at bay.

“I didn’t have a leadership career plan,” he said. “I thought if I could become a good teacher, professor and researcher, I’d be happy.”

Shankel came to KU in 1959 as a faculty member in the microbiology department, then known as the bacteriology department. He came to KU to start a program in what was then a new area, microbial genetics, and was promoted to associate professor 1964 and full professor in 1968.

Born in Nebraska and raised in Canada, Shankel told retired KU journalism professor Calder Pickett in a 1996 interview that a career in science was not an inevitability.

“(As a boy) I was actually more interested in and did better in things like English and those kind of areas than I did in science,” Shankel said.

He earned a bachelor’s degree in English from Walla Walla University in Washington and a doctorate in bacteriology and biochemistry from the University of Texas.

The microbiology department was his academic home throughout his career at KU. It was where he kept an office, a laboratory and continued to teach classes amidst his forays into administrative roles. It was also where he returned for his final year at KU before retiring with emeritus status in 1996.

In his interview with Pickett, Shankel attributed KU’s reliance on his leadership to a simple trait.

“I think that I’ve always been willing to take on extra responsibility and to work hard,” he said.

A memorial service will be 4 p.m. Aug. 18 at Woodruff Auditorium in the Kansas Union followed by a reception at the Adams Alumni Center.