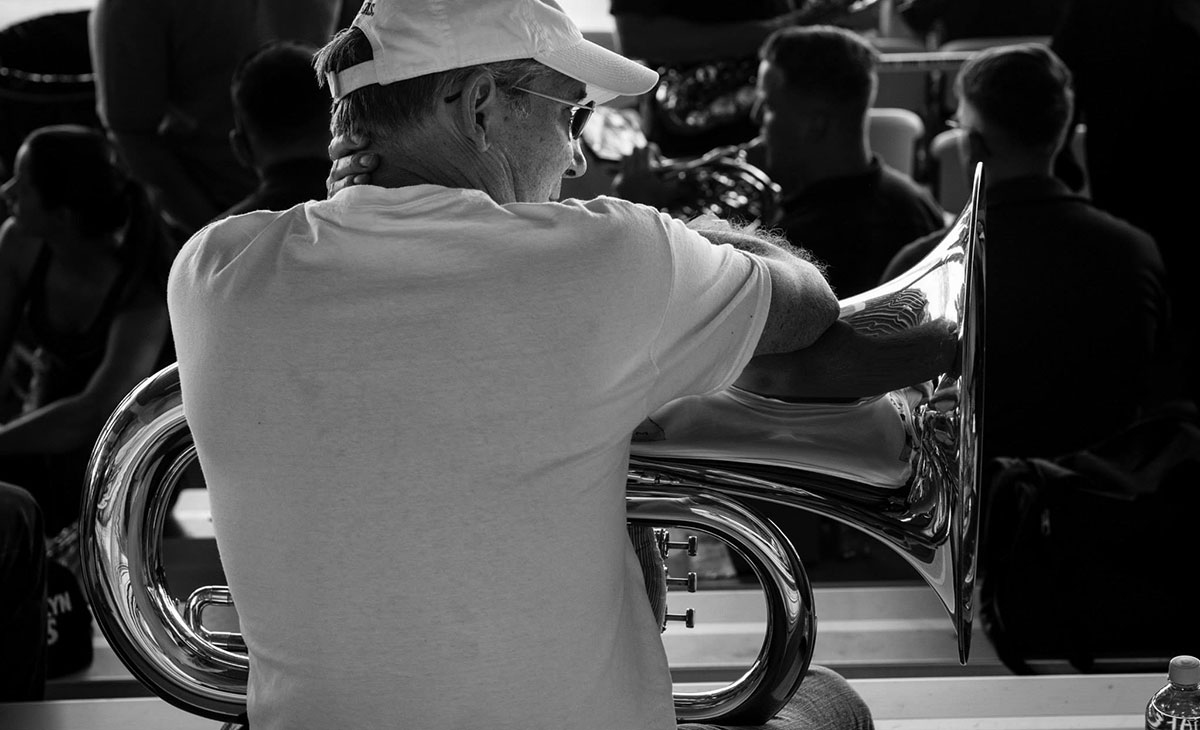 LAWRENCE – For Scott Watson, a phrase once spoken by the late tuba master Arnold Jacobs of the Chicago Symphony Orchestra unlocked something in his mind and in his playing of the brass instrument.

Now the University of Kansas professor of music has tried to capture that magical mind-body linkage in his own new book for music educators who teach students of brass instruments.

“I'm sure you've heard the slogan that, when doing carpentry, you should measure twice and cut once. That is a holophrastic slogan,” Watson said. “It's a phrase or a word that is chock-full of meaning, one that leads you to a specific action. I had heard one of these, in terms of music, by the famed player and pedagogue on my instrument, the tuba, Arnold Jacobs. My teachers used to quote Mr. Jacobs all the time when he would say, ‘Blow from the lips.’ And for a brass player, that is such a genius proposition, because in one little phrase Arnold Jacobs combined breathing technique and lip function — what we call an embouchure in brass playing, how you form your face to play a brass instrument — into a single thought.

“By saying that, and following same, what you're doing is putting your air where it's needed, which is the lips, so that they vibrate. And I found as a student that it made me play better, and when I write that on the music of my students, they play better.

“I was inspired by that particular one. I said to myself, ‘I think there's something here about things that are simple like this kind of phrase, where it tells the student what to do without having to think about it.’ So this book was inspired by that one holophrastic phrase.”

Watson is referring to his new book, “Brassword: A Holophrastic Method for Teaching Young Brass Students.” (Fishface Publications, 2020) It’s a state-of-the art manual for music educators, complete with links to demonstration videos and a related website that Watson established to accompany the book.

It was a project to work on, Watson said, when COVID-19 precautions shut down music performances last year.

“I had my own phrases that I had created through decades of teaching my own students,” Watson said, “so I already knew that those work. I decided to complete the process by coming up with holophrastic slogans for all the main aspects of playing a brass instrument, with the target audience being music educators who use this approach and those phrases with their students.”

“Fishface,” the name of Watson’s publishing company, is one of those holophrastic phrases.

“That is one that I've used with my students to talk about how to form your face, your embouchure, because you can talk about it — and I can certainly do that, as I do in my pedagogy classes — the five or six things that are the characteristics of the embouchure,” Watson said. “But when you're playing a brass instrument, you can't be thinking about five or six things at the same time. You just need to be hearing the music in your head and playing the instrument on autopilot. So what I tell them is fishface, a big, ugly carp, which gives you all the characteristics of a proper embouchure, like the corners being firm. So, all my KU students past and present are very aware of the fishface. I've been using that since the early 1980s.”

Some of the other conceptual phrases Watson employs in the book include “distant Darth Vader breath,” “laser air,” “fog-the-mirror air,” “big river air” and “the tongue slices the air.”

Realistically, Watson said, his book will be most useful for high school band teachers.

“It's the idea that, by the time they get into high school, students will have enough habits and enough conditioned responses through this method that they can have what are known as autotelic experiences,” Watson said. “That's getting yourself lost into what you're doing, like someone who's painting or putting together a model, and they just totally lose awareness of time and place. That's when musicians play the best, when they can really immerse themselves into the music. But to do that, you have to have a lot of major aspects of playing on autopilot, and this method is intended to get them there quicker and better.”