LAWRENCE — Three candidates for the next University of Kansas chief of police and director of public safety will begin campus interviews beginning Wednesday, June 2.

The search committee, led by Callie Long, associate vice provost for operations, invites the campus community to watch a virtual public presentation by each candidate and submit questions. The search began after current Chief of Police Chris Keary announced internally his intent to retire this year.

The chief of police and director of public safety is responsible for providing leadership and direction for all operations of the Office of Public Safety. The next police chief will formulate a strategic vision and mission for the department, develop policies and make policy and procedural decisions of the department related to the operation and delivery of police services and the security of the university. The individual will implement procedures for enforcement of agency regulations, state and federal laws and local ordinances. The chief of police is expected to work toward creating a diverse staff that contributes to a campuswide culture of care and helps everyone in the KU community feel they belong.

Candidates have been asked to present their thoughts on “Police Reform on a University Campus.” The presentation schedule:

Registration is required for all presentation viewers. Participation in each presentation will be limited to the first 300 registrants. Questions from viewers will be moderated and presented by search committee members. 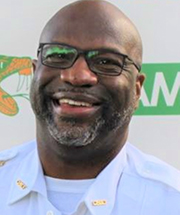 Candidate 1 is Terence Calloway, chief of police and assistant vice president of Campus Safety and Security at Florida A&M University. Calloway joined Florida A&M in 2013 after serving as chief of police at Austin Peay State University from January 2012 to June 2013, and as chief of police for the Village of Woodmere, Ohio, from January 2010 to January 2012. He has held additional positions at Cuyahoga Community College in Cleveland and in the city of Warrensville Heights, Ohio. Calloway has a bachelor’s degree in criminal justice from David N. Myers University and a master’s in justice administration from Tiffin University. He attended the FBI National Academy Session 244 in 2011 and the National Emergency Management Advanced Academy in 2018. He has been an adjunct instructor at Florida A&M, Austin Peay and Cuyahoga Community College. His resume is available for review on the search webpage. 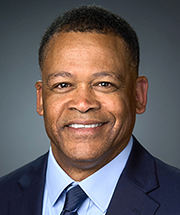 The second candidate is Nelson Mosley, police chief of Rose Hill. Mosley joined the Rose Hill Police Department as its leader in July 2016. He spent much of his law enforcement career in the Wichita Police Department, beginning in 1987 as a police officer and advancing through the ranks to become deputy police chief in 2009 and ultimately serve as the interim police chief from September 2014 to January 2016. After earning an associate’s degree from Butler Community College, Mosley went on to acquire a bachelor’s degree in human resources management and a master’s degree in management, both from Friends University. His professional training includes the 241st session of the FBI National Academy, the Chief Executive Leadership Course of the Southern Police Institute and Leadership Wichita. He is the current president of the Kansas Association of Chiefs of Police. Mosley has been an adjunct professor at both Wichita State University and Butler Community College. His resume is available for review on the search webpage.

Finalists for leadership position at KU are typically announced one to two business days in advance of their campus interviews. The final candidate will be announced June 3.