LAWRENCE — The University of Kansas debate program opened 2022 by winning back-to-back tournaments Jan. 4-9 hosted by the University of Texas in Dallas and the University of Texas in San Antonio. The KU teams of senior Lily Ottinger, Shawnee, and freshman Samir Rahaman, Chicago, and freshmen Ethan Harris and Jacob Wilkus, both of Lawrence, closed out the finals of the “Rowdy Debates Tournament” hosted by UTSA to finish as co-champions. At the “Fear and Loathing in Dallas” debate tournament hosted by UTD, Ottinger and Rahaman took first place while Harris and Wilkus reached the semifinals and finished third. The KU team of freshmen Aiden Basore, Lawrence, and Jared Spiers, Pittsburg, took fifth place at the UTSA tournament. 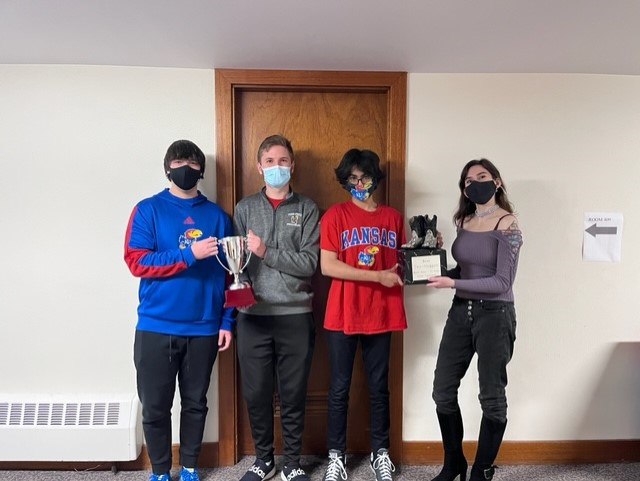 “We are incredibly proud of the effort of the debaters and coaching staff that led to this success,” said Brett Bricker, KU debate coach.

Scott Harris, the David B. Pittaway Director of Debate at KU, pointed out that the students and coaches had to overcome some unusual barriers this week.

“The heat and water were out in Bailey Hall, so the debaters were very cold all week, which made it a uniquely challenging experience,” he said.

At the second tournament Ottinger and Rahaman advanced to elimination rounds as the third seed, Basore and Spiers advanced as the sixth seed, and Harris and Wilkus cleared as the eighth seed. The Kansas teams met in the quarterfinals with the higher-seeded Ottinger-Rahaman team advancing. Ottinger and Rahaman then defeated the University of Central Oklahoma to advance to the finals. Harris and Wilkus defeated the top-seeded team from Johnson County Community College in the quarterfinals and the University of Texas-Dallas in the semifinals to also advance to the finals as KU closed out the week with a co-championship.